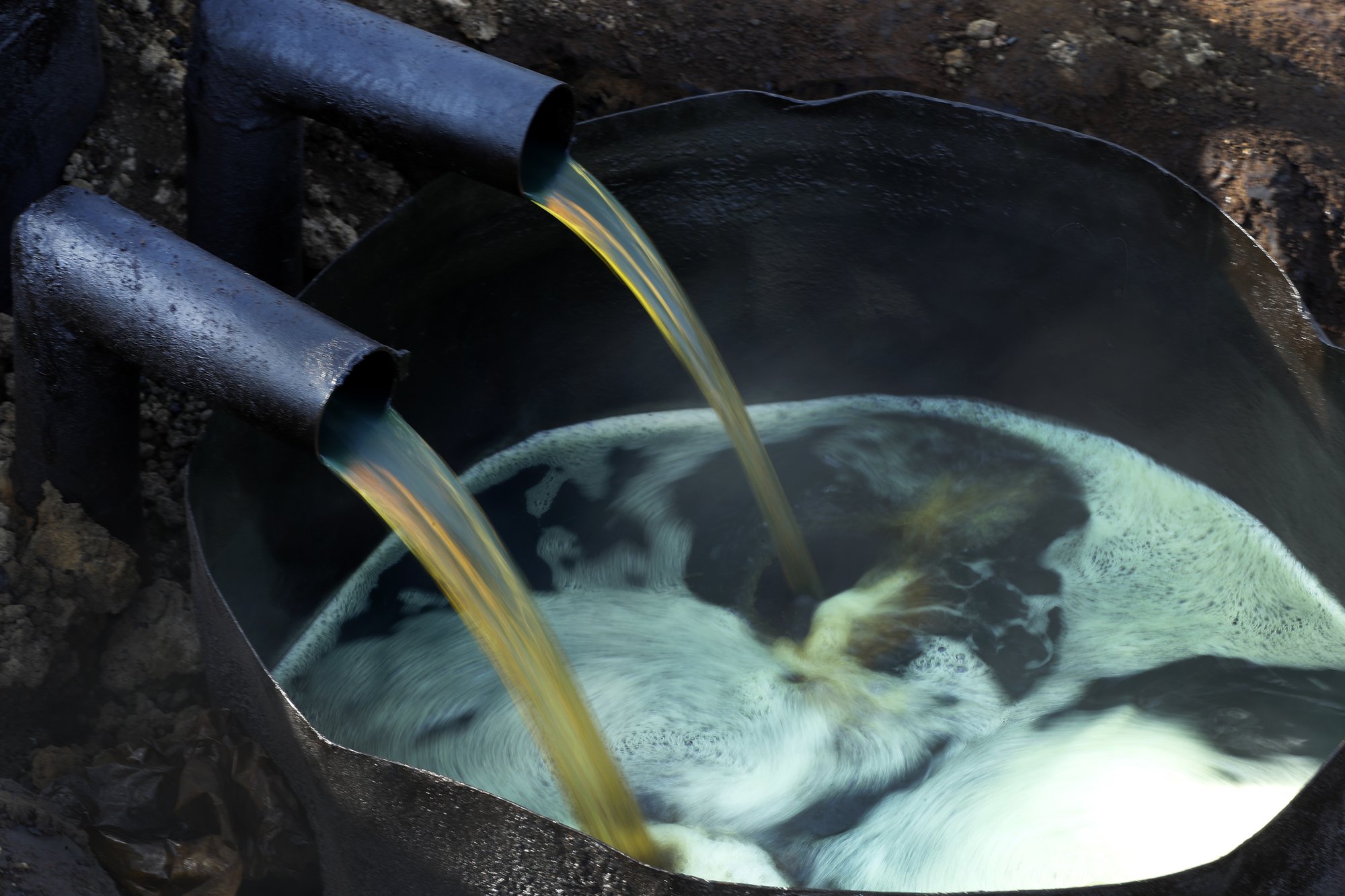 This April 6, 2018 file, photo, shows diesel flowing from rudimentary tubes into a barrel at a primitive refinery in a village controlled by a US-backed Kurdish group, in Rmeilan, Hassakeh province, Syria. (Photo: AP)

Syrians in government-controlled areas who have survived eight years of war now face a new scourge: widespread fuel shortages that have brought life to a halt in major cities.

Cars line up by the hundreds outside petrol stations, and long lines of people waiting to buy rationed cooking gas begin forming before dawn. Taxi drivers are crossing the border to Lebanon to stock up on fuel — and then doubling their rates. Drivers can be seen pulling over because their gas tanks are empty.

The shortages are largely the result of Western sanctions on Syria and renewed US sanctions on Iran, a key ally. But they have sparked rare and widespread public criticism of President Bashar Assad’s government just as he has largely succeeded in quashing the eight-year rebellion against his rule.

Western sanctions imposed after Assad launched a violent crackdown on Arab Spring protests in 2011 crippled the country’s oil industry, which once provided 20 percent of government revenues. Over the course of the war, Syria’s main oil fields fell into the hands of the Islamic State group and then US-backed Kurdish forces.

But the Iranian aid appears to have dried up as the US has restored tough sanctions following President Donald Trump’s decision to withdraw from the 2015 nuclear agreement. In November, the US Treasury Department added a network of Russian and Iranian companies to its blacklist for shipping oil to Syria and warned of “significant risks” for those violating the sanctions.

Syrian officials say oil imports stopped in October and have appealed for patience.

Syria produced 350,000 barrels per day before the war and exported more than half of it. Now it is down to around 24,000 barrels a day, covering only a fraction of domestic needs, said Mustafa Hassweiya, head of the state company for distribution of fuel.

“It is a vicious economic war against us,” Hassweiya told al-Ikhbariya TV station.

Earlier this month, the government limited fuel for private cars to 120 liters per month. On Monday, it limited the purchase of fuel to 20 liters every five days. Households are allowed one 8-kilogram (18-pound) gas canister every 23 days through a smart card system introduced last month. Gas stations have been ordered to remain open around the clock but many are unable to do so.

Officials blame the shortages on sanctions, but many Syrians point to government mismanagement and corruption. The government’s handling of the crisis has provoked widespread criticism, even on state media and in parliament.

Syria is Here, an anonymous Facebook page that reports on economic affairs in government-controlled areas, says officials cut in line to fill up their tanks and take more than is allowed. It criticized a televised tour by the oil minister to purportedly normal petrol stations, saying it trivialized the crisis.

“Is it so difficult to be transparent and forward? Would that undermine anyone’s prestige?” the post asked. “We are a country facing sanctions and boycotted. The public knows and is aware.”

The government has since ordered the fuel allotment for state vehicles cut in half.

When another Facebook Page, Hashtag Syria, reported anticipated price hikes for subsidized fuel, government officials accused it of inciting panic and causing a run on gas stations. The site refused to take the news down and asked the ministry for comment, “instead of the threats.”

The site manager was arrested. Hashtag Syria said the ministry decided to punish the site manager “instead of dealing with the real problem.” It called on the security agency holding the manager to either release him or put forward charges.

The arrest drew rare public criticism from lawmakers and editors of state-run newspapers.

“This is laughable,” media professor Nahla Eissa told a presenter on Ikhbariya TV who had suggested the site was to blame. “No rumor, big or small, can be responsible for the situation we are in.”

The government’s resources have been further strained by the need to provide subsidized fuel to large areas captured from insurgents in recent years. Eight out of 10 Syrians are living below the poverty line, according to the UN, and many cannot even afford the subsidized fuel.

Economic hardship and anger at government corruption were among the main grievances that ignited protests in Syria in 2011. The government’s use of lethal force, and the rise of an armed insurgency, eventually ignited a full-blown civil war.

Jihad Yazigi, an economist and editor-in-chief of The Syria Report, said fuel and gas shortages are “the worst” the government has faced. He said it is likely to respond with more rationing and with greater reliance on smuggled oil, possibly from Iraq. Other experts have estimated that Damascus buys 20 percent of its fuel from middlemen in Syria’s Kurdish areas.

Danny Makki, a London-based Syrian journalist who is currently in Damascus, said anger is rising again over deteriorating services. “It is a pressure cooker,” he said.