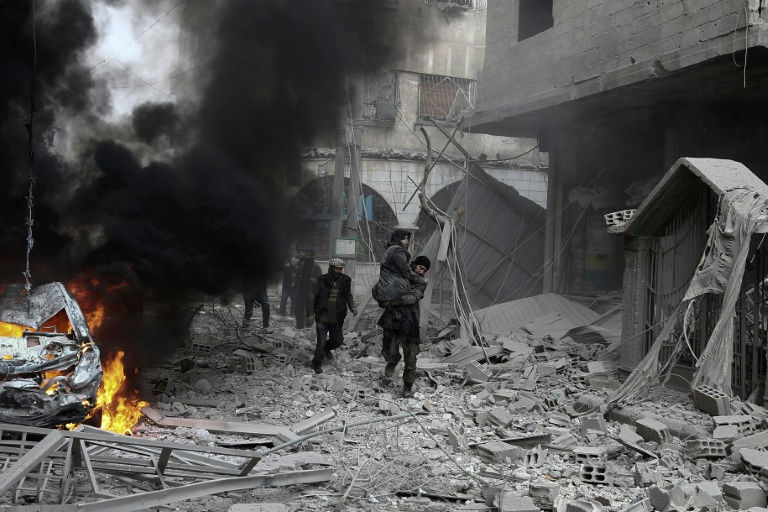 A Syrian man carries an injured woman after bombardment by Syrian and Russian forces in the rebel-held town of Hamouria, in the Eastern Ghouta enclave near Damascus on January 6, 2018. Photo: AFP/Abdulmonam Eassa

Regime forces upped the pressure on two of the last rebel bastions in Syria on Monday, pounding the Eastern Ghouta enclave near Damascus and the northern province of Idlib.

Shelling and air strikes on Ghouta, which government forces have besieged for four years, killed at least 20 civilians, the Syrian Observatory for Human Rights said.

The semi-rural area east of the Syrian capital is home to around 400,000 inhabitants and is targeted almost daily by regime forces trying to flush out rebel groups.

On Monday, a woman and her three children were killed in regime strikes on Douma, which is the main town in Eastern Ghouta, Rami Abdel Rahman, the head of the Britain-based Observatory, said.

In the town's morgue, medics were wrapping the children's shredded bodies in shrouds amid the shrieks of bereaved parents, an AFP correspondent reported.

Chaos engulfed the rudimentary facility as rescuers kept rushing in more wounded, some of whom died before they could receive life-saving treatment.

"I was at the market with my father, selling mint, parsley and onions. The next thing I knew, my foot was bleeding and my dad had a head injury," said Ahmed Hatem, an 11-year-old boy, as he sat on the floor wincing in pain. 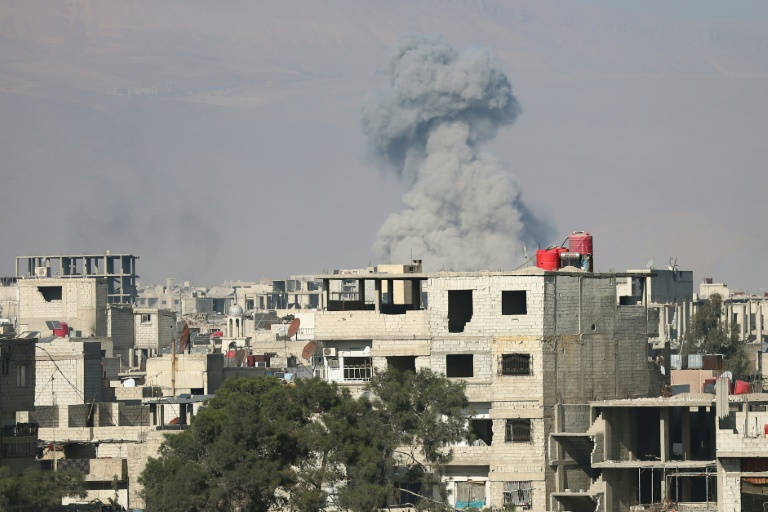 Smoke rises after a reported air strike in the rebel-controlled town of Madira in the Eastern Ghouta region on January 8, 2018. Photo: AFP/Amer Almohibany

A child and two other civilians were also killed in strikes on the small town of Madira, the Observatory said. The violence also left another 13 civilians dead across Eastern Ghouta.

The area, which had been designated as a "de-escalation zone" as part of an international deal last year to bring down violence levels, has witnessed major bloodshed in recent weeks.

Syrian forces also managed overnight to pin back rebels who had surrounded a regime base there.

Rebels led by the Jaish al-Islam group had in recent days surrounded the army's only military base in the area but the state news agency SANA said Monday the siege had been broken.

"Units from the Syrian Arab Army have brought an end to the encirclement of the Armoured Vehicles Base in Harasta," it said, adding that operations were ongoing to fully secure the base.

According to the Observatory, the fighting in Harasta since the base was surrounded in late December left 72 regime fighters and 87 rebels dead. 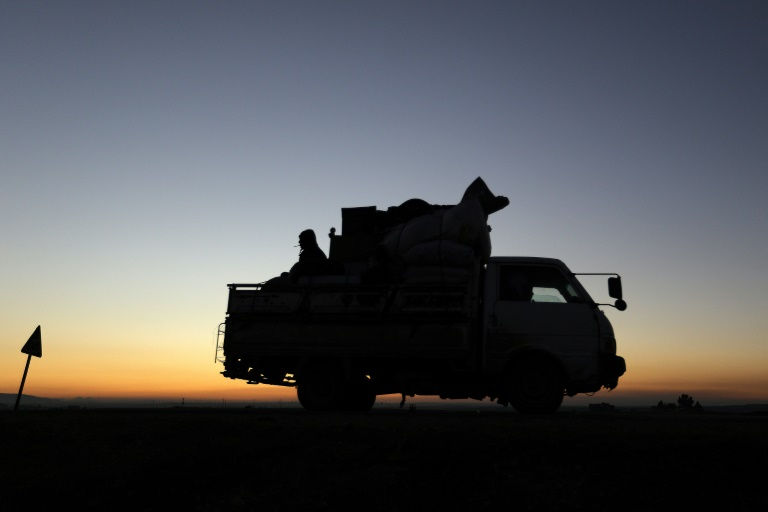 Displaced Syrians who fled the fighting in Idlib province's southeastern town of Sinjar drive on a road in a rebel-held area near on January 7, 2018. Photo: AFP/Omar Haj Kadour

Syrian and Russian aircraft also pounded targets in the northwestern region of Idlib, pressing a week-old operation targeting the last province in the country to escape government control.

Raids Sunday left "at least 21 dead, including eight children and 11 members of the same family" west of the town of Sinjar in the southeast of the province, the Observatory said.

Russian-backed regime forces launched an operation on the edge of Idlib province in the last days of 2017 and have retaken villages every day since.

After the collapse of the Islamic State jihadist group in both Syria and Iraq late last year, President Bashar al-Assad's regime is bent on restoring its grip over the country.

Idlib province, which borders Turkey, is almost entirely controlled by anti-government forces that are dominated by a jihadist outfit known as Hayat Tahrir al-Sham (HTS) consisting mostly of fighters from a former Al-Qaeda affiliate.

An explosion on Sunday in the city of Idlib at a base for the group Ajnad al-Qawqaz, made up of men from the Caucasus wo fight alongside HTS, left at least 43 dead, including 28 civilians, the Observatory said.

The toll went up from 23 after rescuers found more bodies in the wreckage and the most critically injured died of their wounds.

It was not immediately clear whether the blast was caused by air strikes or was the result of the kind of internal clashes that sometimes break out between jihadist and rebel factions.

After shrinking to barely a sixth of the country at the height of the nearly seven-year-old conflict, the areas under government control now cover more than 50 percent of Syrian territory.

More than 340,000 people have been killed and millions have been driven from their homes since Syria's conflict erupted with anti-government protests in 2011.