Syria's battered Eastern Ghouta, the last opposition-controlled pocket around Damascus, has been besieged since 2013 and is now is facing an intense regime bombing campaign. 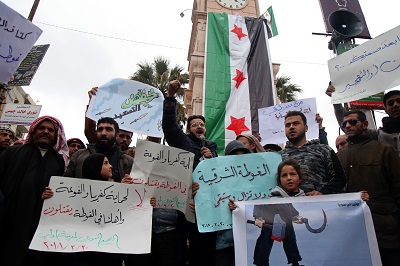 Syrians gather in solidarity with the people in the rebel-held enclave of Eastern Ghouta during a demonstration in Idlib against the government bombardments on February 20, 2018. AFP photos 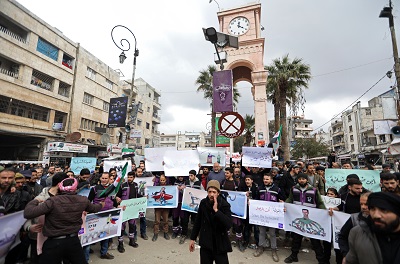 Here is a summary of what has happened in the rebel enclave, home to around 400,000 people: 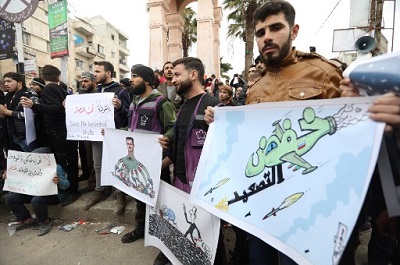 Battles, bombings, escalation
In July 2012, more than a year after the start of the uprising against the government, Free Syrian Army (FSA) rebels attack the capital from its outskirts in Ghouta.
Regime forces quickly reassert control but some areas fall into the hands of the rebels, who set up base in Eastern Ghouta.
The region becomes the target of regular bombings and artillery strikes: markets, schools and hospitals are hit.
Starting in 2013, Eastern Ghouta is totally under government siege -- making food, medicine, and other goods hard to access.
In May 2017, it is chosen as one of four "de-escalation" zones under a deal between Russia, Iran and Turkey, key players in the conflict.
But the government maintains its blockade and renews bombardment in mid-November, leaving buildings and streets in ruins.
On February 5, 2018 a wave of intense bombardment leaves around 250 civilians dead and hundreds wounded in five days.
A fresh bombing campaign begins on February 18, with a simultaneous build-up of reinforcements around the enclave that suggest a ground assault is in preparation.
Chemical attacks
The Damascus government is also accused of carrying out chemical attacks on Eastern Ghouta and other areas.
In August 2013, hundreds of people including many children are killed in a suspected toxic chemical attack on the region and another rebel bastion near Damascus, Moadamiyet al-Sham.
Washington accuses the Syrian government of responsibility, saying more than 1,400 people, including 426 children, died.
President Bashar al-Assad's regime denies involvement.
US and French retaliatory strikes are averted only after a last-gasp agreement between the US and regime supporter Russia that Syria's chemical weapons arsenal will be destroyed.
A UN report concludes days later that the use of sarin gas had been proved "unequivocally and objectively".
In January 2018 chlorine is suspected of having been used on several occasions in munitions launched by the regime into the region, claiming several lives.
On February 5 US ambassador Nikki Haley tells the UN Security Council that there is "obvious evidence from dozens of victims" to corroborate the chlorine attacks.
Following a French warning of punitive strikes, the Syrian government again denies it possesses chemical weapons.
Malnutrition, siege
Eastern Ghouta borders key agricultural fields and was once an important source of food for the capital.
But the government's siege means the 400,000 people -- half of them children -- trapped there are now suffering severe food shortages and medication.
Some food is grown locally and limited supplies are smuggled in, but humanitarian access is limited despite regular appeals from aid agencies.
Following the release of shocking images of severely malnourished children in October 2017, the United Nations condemns "the deliberate starvation of civilians as a method of warfare".
The following month, UNICEF says childhood malnutrition levels in the region are the highest recorded in Syria since the war began.
"Eastern Ghouta is experiencing a Middle Ages-style siege," French ambassador to the UN, Francois Delattre, tells reporters in early January.