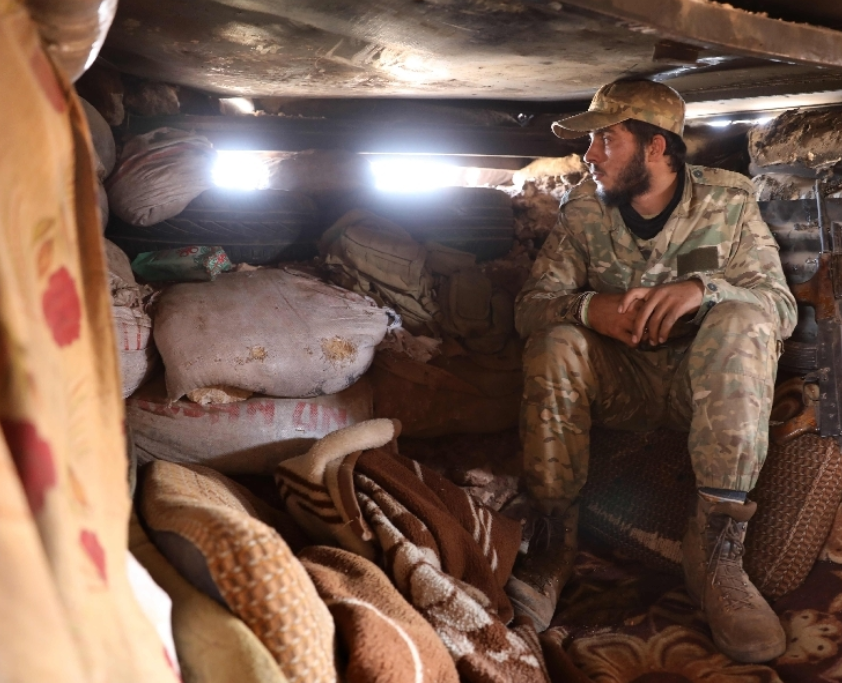 A Syrian rebel-fighter from the National Liberation Front (NLF) rests in a sand-bagged bunker at the frontline facing regime areas in the southern countryside of Aleppo on October 14, 2018. (photo: AFP)

DAMASCUS, Oct. 15 (Xinhua) -- Syria's Foreign Minister Walid al-Moallem on Monday said the Syrian army forces are ready around Idlib if the terror-designated groups refused to pull out of the demilitarized zone.

Speaking in a press conference in Damascus with his Iraqi counterpart Ibrahim al-Jaafari, al-Moallem warned that there will be other options if the terror-designated groups rejected to abide by the demilitarized zone deal in northern Syria.

He said Idlib province, like any other Syrian area, will definitely return under the government control.

He said if the demilitarized zone deal, which was reached by Russia and Turkey last month, is not implemented, Syria will have other options.

His remarks came as the al-Qaida-linked Nusra Front and its umbrella of the Hayat Tahrir al-Sham rejected to withdraw from the planned demilitarized zone in northern Syria.

On Sunday evening, the al-Qaida-linked group said in a statement for the first time in response to the deal that it will continue to fight the government forces.

The Syrian Observatory for Human Rights said none of the extremist groups left the demilitarized zone as they were supposed to evacuate by Oct. 15 in accordance with the Russian-Turkish deal to establish a buffer zone in certain areas in northern Syria.

It added that the jihadi groups control 70 percent of the demilitarized zone.

The Tahrir al-Sham, or Nusra Front, is considered as the most powerful among the rebel groups in Idlib Province, which is the last major rebel stronghold in Syria.

In his remarks Monday, al-Moallem said the Nusra Front must be rooted out from Idlib because it's a terrorist group.

He said the government has been prioritizing the reconciliation deals to finish the situation in Idlib out of concern for the lives of civilians in that province, where 3.5 million people live.

He, however, noted that "we cannot stand indifferent about the current situation in Idlib if Nusra Front refused to abide by the agreement."

While hinting that no military action is imminent, al-Moallem said: "We have to wait, but the Syrian Army is ready in the vicinity of Idlib."

The withdrawal of the extremist groups from the buffer zone is the second step of the Russian-Turkish deal to establish such a zone in northern Syria.

The rebels have withdrawn their heavy weapons recently but the fighters didn't.

The deal was reached in September between the leaders of Turkey and Russia, aiming at averting Idlib province, which is the last major rebel stronghold in Syria, a wide-scale offensive by the Syrian Army.

The Syrian government has welcomed the deal but noted that it was temporary not a permanent one.