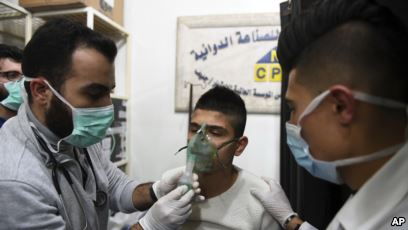 DAMASCUS, March 23 (Xinhua) -- At least 21 people suffered suffocation on Saturday after the rebels used poisonous gas while shelling a town in the central province of Hama, state TV reported.

The shelling targeted the village of Rasif in the northern countryside of Hama, said the report, citing the head of Sqailbiyeh hospital, Isam Housheh.

The doctor said that 21 people were rushed to the hospital after breathing in poisonous gas.

Meanwhile, the state TV aired footages from inside the hospital where the injured people were taken, showing people lying in bed with masks.

However, the current attack took place in a government-controlled town in Hama province.

According to local reports, the Syrian army is bracing for a wide-scale offensive against the rebels in the Idlib province, the last major rebel stronghold in northwestern Syria near Hama.