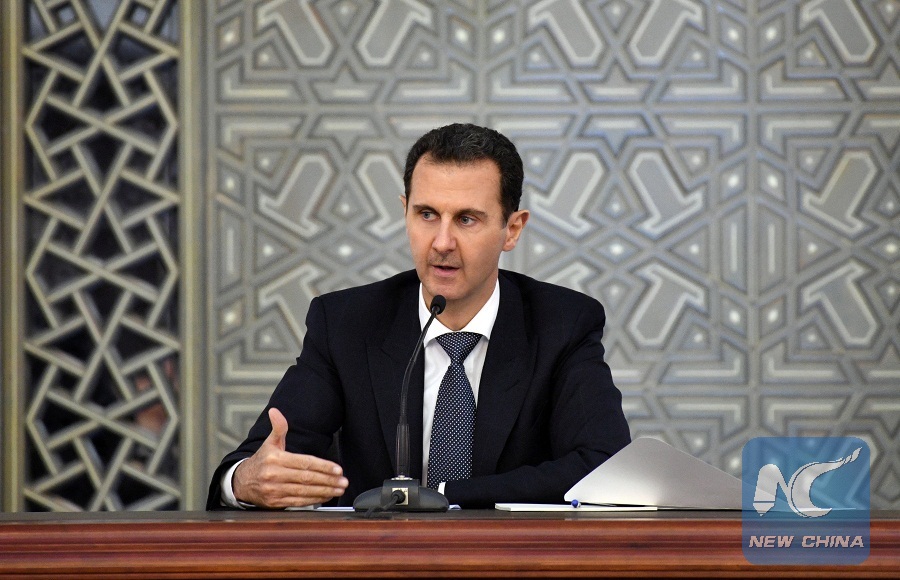 Syrian government is wary of US move to form a new rebel army in northern Syria aiming to fragment the country. (Reuters Photo)

The Syrian government is concerned that the latest US move to form a new army in northern Syria aims to fragment the country.

On Sunday, reports cited the US-led anti-terror coalition as saying that the US is working to form a 30,000-strong border security force, which will be under the command of the Kurdish-led Syrian Democratic Forces (SDF), an alliance of Kurds, Arabs, and Assyrians supported by the US in northern Syria.

The force will be deployed in northeastern Syria along the border with both Turkey and Iraq, a move that came after the SDF captured the northern city of Raqqa from the Islamic State (IS). Raqqa was the de facto capital of the terror group.

The SDF also captured other areas from IS in the northern countryside of Deir al-Zour late last year to consolidate its positions near the Iraqi border.

The situation in northern Syria and the growing influence of the Kurdish militias have raised the ire of the Syrian government, which has for long accused Washington of playing a destructive role in Syria.

The Syrian Foreign Ministry slammed the decision on Monday, saying the US bid to form an armed militia in northern Syria is "a flagrant violation of Syria's sovereignty."

The US declaration "constitutes a flagrant aggression on the unity and sovereignty of Syria and a violation of the international law," the ministry said, vowing Syrian government's resolve to end the US presence in the war-torn country.

"The US action comes in the framework of its destructive policy in the region to fragment the countries and spur tensions to hinder any solution to the crisis," the ministry charged.

Meanwhile, the ministry warned that it will regard any Syrian citizen taking part in this US-backed militia as a "traitor" and will be dealt with accordingly.

The ministry denounced the new US move as a "renewed conspiracy" that will be defeated by the Syrian army, which will end any form of the presence of the US and its tools in Syria.

Meanwhile, Syrian Deputy Foreign Minister Faisal Mekdad told the pan-Arab al-Mayadeen TV that his country is determined to preserve Syria's unity, while slamming the US tactics for damaging global stability.

Russia, Syrian government's main international ally, also expressed fears that the US is "pursuing a policy to cut Syria into several pieces."

Russia's Foreign Minister Sergey Lavrov said Monday that the US does not intend to preserve Syria's sovereignty, accusing Washington of seeking to create a Kurdish-controlled entity along the Turkish and Iraqi border zones.

"The US actions that we have been observing indicate that the US does not want to keep Syria as a state in its current borders ... The US wants to help the Syrian Democratic Forces to set up some border security zones," Lavrov said.

For its part, Turkey, the main backer of the opposition group and staunch opposer to the Kurdish forces in Syria, also slammed the US decision as Turkey's President Recep Tayyip Erdogan accused the US of forming a "terror army."

"Our mission is to strangle it before it's even born," Erdogan said of the border force.

Erdogan's government has for long opposed the growing influence of the Kurdish forces along its border in northern Syria, fearing that any separatist move could inspire Turkey's 14 million Kurds.

Now, the US-backed fighters, the Russia-backed Syrian forces, and the Turkey-backed rebels are racing to achieve territorial gains in northeastern Syria following the near defeat of IS.

The Turkey-backed rebels are trying to foil the advance of the Syrian army while bracing to fight against the Kurdish groups as well.

So the US decision further flames the situation in northern Syria rather than helping to resolve the conflict.

Also Monday, Kurdish activists said the US has provided the SDF in the Afreen region in northern Syria with anti-aircraft missiles.

A report by the War Media, the media wing of the Syrian army, said the US has stipulated that Kurds should only use these weapons in case of an attack on Afreen area, which is regarded as target of an imminent Turkish military campaign.

The US has been carrying out military operations in Syria since 2014, under the name of fighting against the IS militants.

The SDF captured Raqqa late last year, and the Syrian army captured the eastern city of Deir al-Zour, another IS bastion almost in the same time.

However, the Syrian government said Raqqa is still occupied by the US and its fighters on the ground, refusing to acknowledge its liberation from IS.

Mekdad charged in a recent interview that the Kurdish groups in Syria were the new form of IS, in another escalation between both sides.