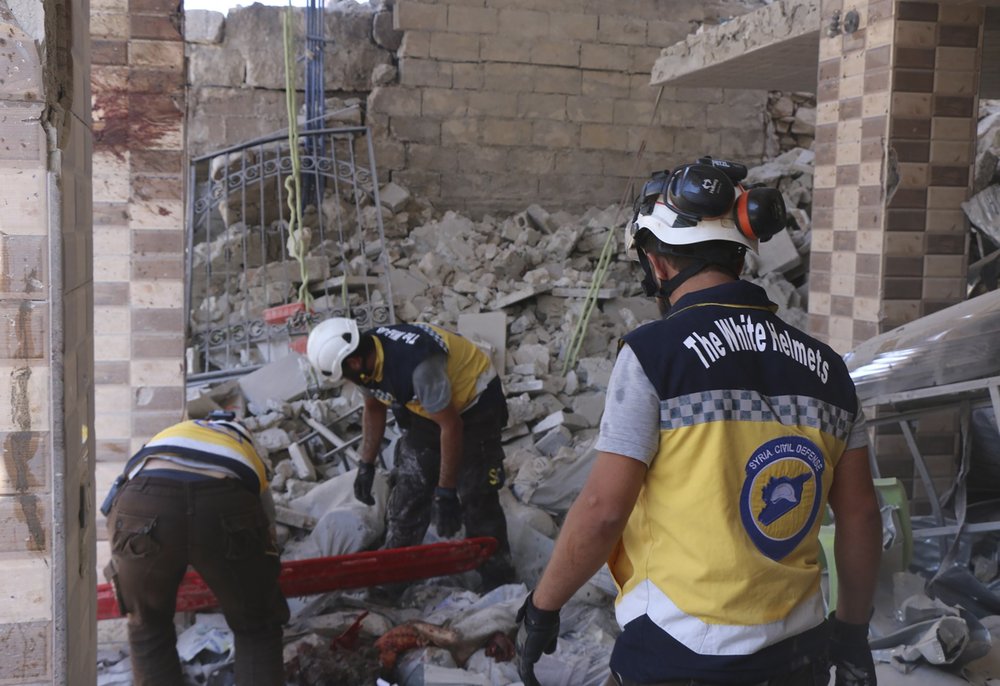 Syrian White Helmet civil defense workers search for victims from under the rubble of a destroyed building that hit by Syrian government and Russian airstrikes, in the northern town of Maaret al-Numan, in Idlib province, Syria, July 22, 2019. Syrian opposition activists say an airstrike on a busy market in a rebel-held town in northwestern Syria has killed at least 16 people. (Photo: AP)

The high death toll marked a sharp increase in the escalation between the two sides amid intense fighting. Government troops, backed by Russian air cover, have been trying since April to push their way into the enclave in the northwestern corner of Syria, near the Turkish border.

Dominated by al-Qaida-linked militants and other jihadi groups, Idlib province and northern parts of the nearby Hama region is the last major rebel stronghold in the country outside the control of Syrian President Bashar Assad.

Despite the heavy bombardment, Assad’s forces have been unable to make any significant advances. Militant groups have hit back hard, killing an average of more than a dozen soldiers and allied militiamen per day in recent weeks.

The fighting has killed more than 2,000 people and displaced hundreds of thousands.

The struggling campaign also underscores the limits of Syria’s and Russia’s airpower and inability to achieve a definitive victory in the country’s long-running civil war, now in its ninth year.

Monday’s airstrikes took place in the town of Maaret al-Numan and also wounded more than 30 people, according to the reports from the region, which has witnessed intensive airstrikes and bombardment almost every day for the past three months. The strikes came in several rounds and caused widespread destruction, burying several people under the rubble.

Hours after the airstrikes, paramedics were able to remove a little girl alive, rushing her to a nearby ambulance.

The Britain-based Syrian Observatory for Human Rights, a war monitor, called it the largest single death toll since a Russian-Turkish truce collapsed in late April.

Syrian state news agency SANA said insurgents shelled the village of Jourin in the northern part of Hama province, killing seven civilians when a shell hit a moving car. State TV also reported that insurgents shelled the government-held town of Suqailabiyah, wounding four people, including a child, while a shell hit a university in the coastal city of Latakia, a government stronghold, without causing any casualties.

Syrian opposition activists said Russian warplanes carried out Monday’s airstrikes, but Russia’s Defense Ministry dismissed the reports as a “hoax,” adding that the Russian air force didn’t “carry out any missions in that area in Syria.” There was no immediate comment from the Syrian government.

The Observatory, which monitors the fighting on the ground in Syria through a network of activists, said 37 people were killed, including two children and three women, in the strike on Maaret al-Numan. It added that the number of casualties from Monday’s airstrike was likely to rise due to the large number of wounded. The Thiqa news agency, an activist collective in northern Syria, reported that the strike killed 27 people.

A member of the Syrian Civil Defense, also known as White Helmets, said one of their colleagues was killed in a second airstrike that hit the market.

On Sunday, government bombing in Idlib killed at least 11 civilians according to the Observatory and first responders.

In neighboring Turkey, Foreign Minister Mevlut Cavusoglu said Ankara would launch a new offensive into northern Syria if a so-called “safe zone” is not established and if threats against Turkey continue from the region.

Cavusoglu made the comments on Monday as a delegation led by U.S. Special Representative on Syria, James Jeffrey, was to hold talks in Ankara. The possible safe zone along the border with Turkey was expected to be on the agenda.

Turkey views Kurdish fighters who have fought alongside the United States against the Islamic State group as terrorists and wants the safe zone established to keep the fighters away from the border. It has recently been sending troop reinforcement to its border region.

Cavusoglu said Turkey would intervene “if there’s no safe zone and if the terrorists are not cleared and continue to pose a threat.”