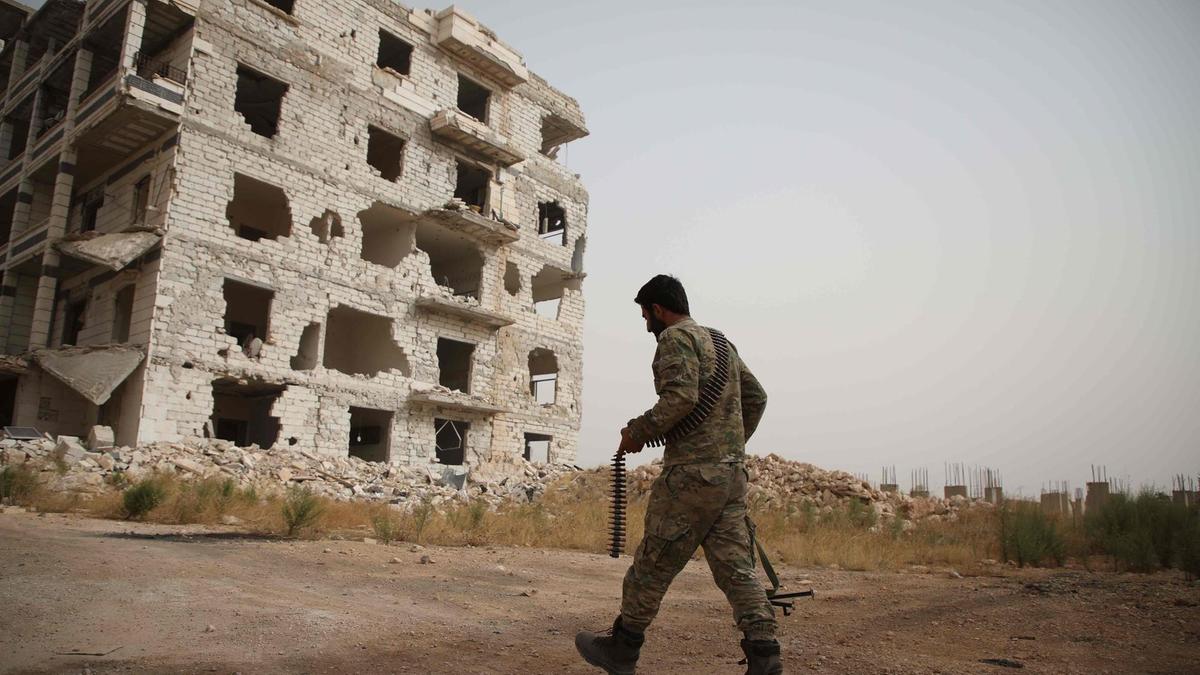 DAMASCUS, Nov. 27 (Xinhua) -- The Syrian army said Tuesday it has responded to attacks by the rebels in the northern countryside of Hama province as the rebels attempted to sneak toward military positions, seen as a violation to the Russian-Turkish demilitarized zone deal, according to the state news agency SANA.

Citing military sources, the report said military units in the northwestern countryside of Hama foiled several infiltration attempts by the rebels to military positions. It added that all of the rebel attackers were killed.

An army unit positioned in the town of Jubain spotted a rebel group closing in from near the town of Hesraya on Tuesday, barraging it with fire, which led to foiling the attack and the killing of the assailants.

The army also thwarted another infiltration attempt near the city of Latamneh in Hama countryside Tuesday, said the report, adding that the rebel attack aimed to infiltrate the defense line of the Syrian army on the outskirts of the demilitarized zone in the nearby Idlib province.

The report charged that the rebels in Idlib and the adjacent countryside of Hama have attempted to take advantage of the Russian-Turkish demilitarized zone deal to re-deploy and fortify its positions as well as to get more arms.

It said that the rebels of the al-Qaida-linked Nusra Front on Sunday deployed 50 missiles in several areas in Idlib and its countryside. It added that "French terrorists" modified some of the warheads and stuffed them with chlorine gas.

The demilitarized zone deal is in its third month and activists of the Syrian Observatory for Human Rights said recently the situation is heated in that zone as the ultra-radical rebels and the government forces are preparing for an "unclear future."

The Hayat Tahrir al-Sham, the umbrella group of the Nusra Front, is also consolidating positions and fortifying its areas while opening the doors for volunteers to join the ranks of its fighters in Idlib.

The planned demilitarized zone includes areas in Idlib, which is the last major rebel stronghold in northwestern Syria, as well as adjacent countryside areas of the provinces of Hama, Latakia, and Aleppo.

The deal for imposing a demilitarized zone was reached in September between the leaders of Turkey and Russia, aiming at averting Idlib province from a wide-scale offensive by the Syrian army.

Turkey's task in the deal is to persuade the rebel groups in Idlib to abide by the plan as Ankara enjoys sway over the militants there.

However, the extremist group such as the Nusra Front rejected to withdraw from the zone in accordance with the plan.

It is worth noting that the ultra-radical rebels control 70 percent of the buffer zone.

The Syrian government has initially welcomed the deal but noted that it was only temporary.

But with all the violations, the government officials have recently noted that Idlib will inevitably return under the government control, warning that the situation cannot drag on like this.

Throughout the crisis, Idlib has emerged as the major destination and stronghold of the Syrian rebels fleeing other parts of the country after deals or surrender.

Idlib is now in a state of severe lawlessness characterized by assassinations, explosions, and infighting.

Idlib is also of strategic significance as it shares a border area with Turkey in the north and neighbors the coastal province of Latakia, the hometown of Syrian President Bashar al-Assad.

Notably, the namesake capital city of Idlib lies close to the international road linking the capital Damascus with the northern province of Aleppo.

Idlib is home to around 3.5 million people, including those who evacuated after the surrender of rebels in other Syrian areas.