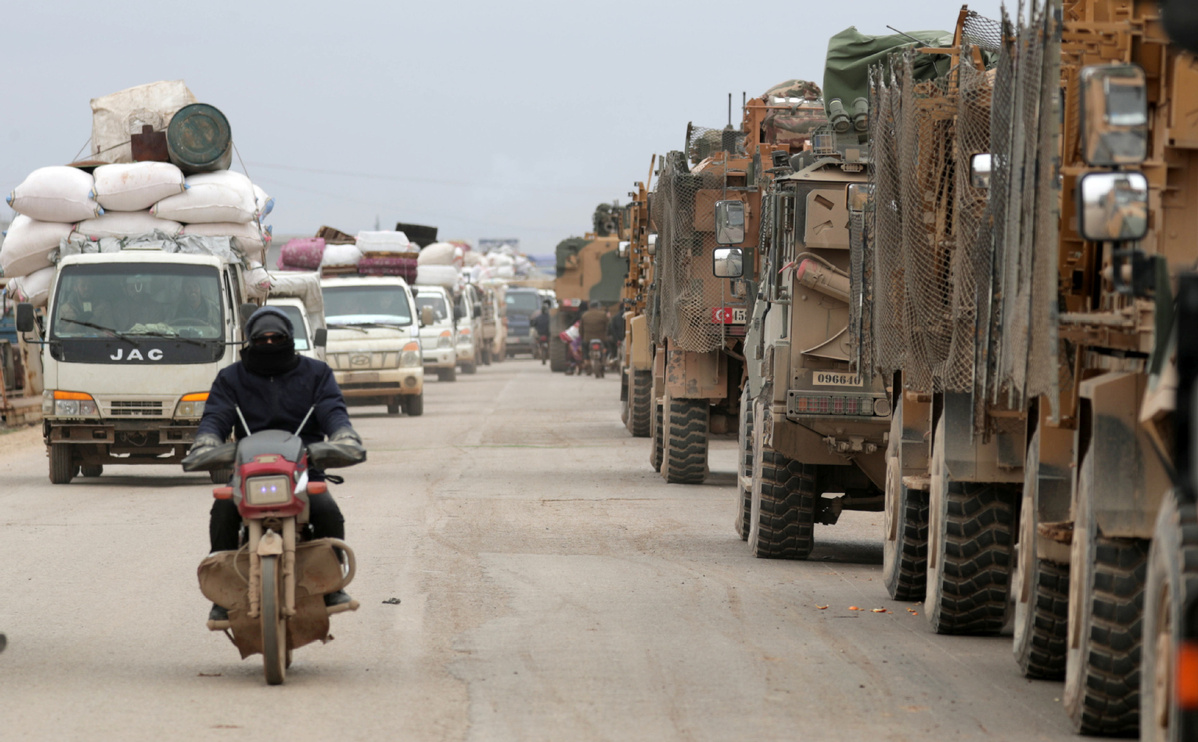 A man rides on a motorbike past Turkish military vehicles in Hazano near Idlib, Syria, Feb 11, 2020. (Photo: Agencies)

DAMASCUS - The Syrian army on Tuesday condemned the escalated Turkish attacks in northern Syria, saying such "aggressions" will not dissuade the Syrian army from eliminating the Turkey-backed rebels.

The army said in a statement that Turkish side is escalating attacks and violations of the Syrian territory against the international law in a bid to help the Turkey-backed rebels in Idlib in northwestern Syria.

The Turkish side sent new military reinforcements and is heavily targeting residential areas and positions of the Syrian army "all in a bid to prop up the terrorist groups in Idlib and Aleppo provinces", according to the statement.

The statement, meanwhile, stressed that the Syrian army is ready to retaliate against the Turkish attacks.

Earlier in the day, the Syrian Foreign Ministry voiced the Syrian government's rejection of any Turkish presence on Syrian soil, stressing that the Turkish "aggressions" will not help reviving the "terrorist groups" that are supported by Turkey.

The ministry urged the international community to curb the "aggressive behavior" of the Turkish side.

This comes as Turkey has upped its attacks on Syrian military sites on Tuesday after the army resorted the strategic Damascus-Aleppo highway that links the southern part of the country with its north.

The Syrian Observatory for Human Rights opposition monitor said the Turkish forces carried out heavy shelling on Syrian government positions in the countryside of Tal Tamr town in the northeastern province of Hasakah on Tuesday.

No human losses are reported from the shelling yet, but it targeted several areas controlled by the Syrian government forces and Kurdish-led Syrian Democratic Forces (SDF), said the Syrian Observatory for Human Rights.

Also, three Syrian pilot fighters were killed Tuesday when Turkish forces shot down their helicopter in Syria's northwestern province of Idlib, according to the Observatory.

The Turkish forces targeted the helicopter over the al-Nayrab area in the northeastern countryside of Idlib, according to the Syrian Observatory for Human Rights.

The incident also marks a new heightened tension between Turkey and Syria in Idlib as the confrontations happen almost daily.

A day earlier, five Turkish soldiers were killed by Syrian targeting of a Turkish-held Syrian air base in Idlib.

The Turkish forces have also been amassing forces and allied Syrian rebels to attack government positions in Idlib and retake the areas that have recently fallen to the Syrian army during the wide-scale offensive launched by the Syrian army over the past two months.