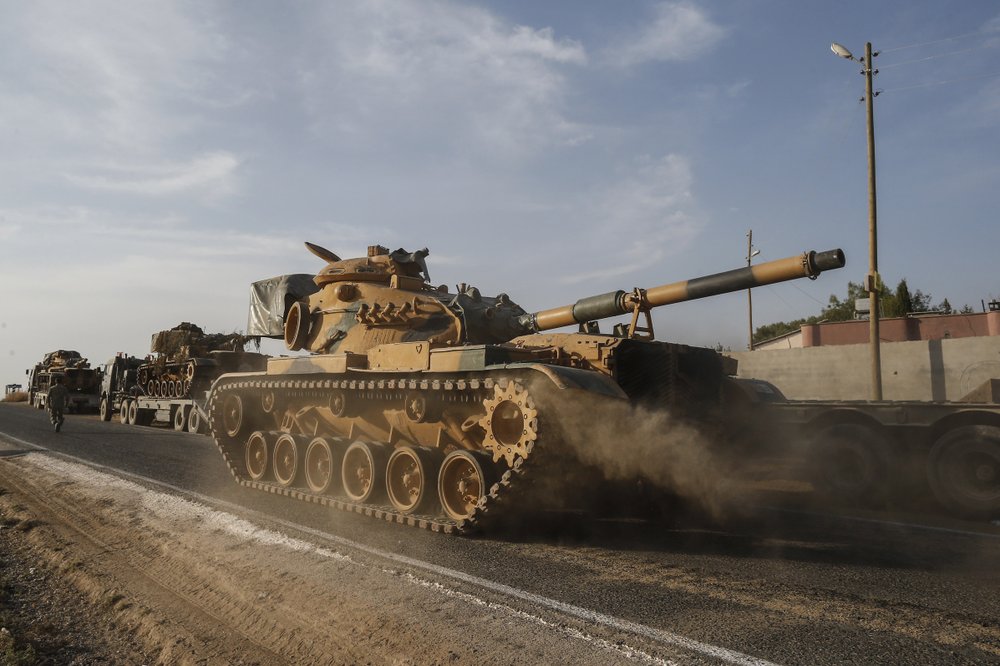 A Turkish forces tank is driven to its new position after was transported by trucks, on a road towards the border with Syria in Sanliurfa province, Turkey, on Monday, Oct. 14, 2019. (Photo: AP)

DAMASCUS, Oct. 26 (Xinhua) -- The Syrian army on Saturday was deployed to new areas in northern Syria near the Turkish border as part of recent Russian mediated understandings, according to the state news agency SANA.

The army units entered the countryside of the Turkey-held Ras al-Ayn city in Hasakah province in northeastern Syria "to help counter the Turkish offensive," SANA said.

Ras al-Ayn was recently captured by Turkey and the Turkish-backed Syrian rebels as part of the Turkish campaign against Kurdish-held areas in northern Syria.

Meanwhile, the Syrian Observatory for Human Rights said over 2,000 Syrian soldiers were deployed Saturday on a key road connecting the northeastern province of Hasakah with northern Aleppo province, the largest deployment since the army left the area five years ago.

The Syrian military units, which were deployed on the highway, were accompanied by Russian forces, said the Syrian Observatory for Human Rights.

The Britain-based watchdog group said the deployment of the Syrian troops on that part of the M4 road comes as part of the deals that the Syrian side concluded with the Kurdish forces recently and the most current one between Russia and Turkey.

On Oct. 9, Turkey launched an operation to clear the Kurdish militia from northern Syria in the east of the Euphrates river to eliminate what Turkey perceives as a threat to its border security, impose a safe zone and resettle millions of Syrian refugees.

The United States reached a deal with Turkey on Oct. 17, imposing a five-day cease-fire to allow the Kurdish forces of the Syrian Democratic Forces (SDF) to pull back from the planned safe zone that Turkey wants to create in northern Syria.

On Oct. 22, Turkish President Recep Tayyip Erdogan and his Russian counterpart Vladimir Putin held a meeting in Sochi, Russia, agreeing on the parameters of the proposed Turkish "safe zone" in northern Syria.

The deal stipulates that the Kurdish militia of the SDF and its broader umbrella of the People's Protection Units will pull back 30 km south of Turkey's border within 150 hours.

Joint patrols by Turkish and Russian forces will take place in that area, according to the deal.