A Syrian refugee and his son were buried in New Zealand on Wednesday in the first funerals for those killed in the twin mosque massacre as Kiwis braced for days of emotional farewells following the mass slayings. 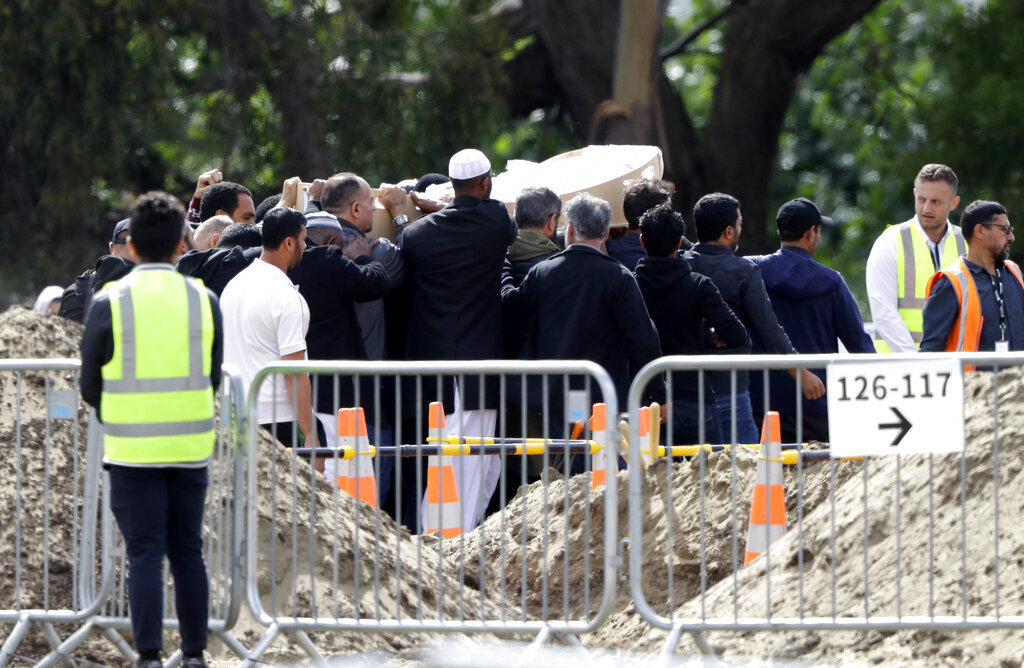 Mourners carry the body of a victim of the Friday March 15 mosque shootings for burial at the Memorial Park Cemetery in Christchurch, New Zealand, Wednesday, March 20, 2019. (Photo: AP)

An Australian white supremacist gunman shot down 50 Muslim worshippers at two mosques in the southern city of Christchurch last Friday in a killing spree that he live-streamed.

Hundreds of mostly Muslim mourners gathered Wednesday morning at a cemetery not far from Linwood Mosque, the second of the two places of worship targeted.

There they prayed and laid to rest Khaled Mustafa and his 15-year-old son Hamza, their names broadcast over a loudspeaker.

The Mustafa family arrived last year as refugees in New Zealand seeking sanctuary from the maelstrom of Syria.

Instead, Khaled and Hamza were shot dead at the Al Noor Mosque, the first mosque attacked.

Younger brother Zaid, 13, was wounded but survived and attended the funeral in a wheelchair, his hands held aloft as he prayed alongside the rows of mourners.

Among those attending the funeral was Abdul Aziz, an Afghan refugee who bravely confronted the gunman at Linwood Mosque. He was hugged by many mourners.

Alabi Lateef, another Linwood mosque worshipper who confronted the gunman, told AFP he and others helped prepare the Mustafas according to Islamic tradition ahead of today's funeral.

"I helped wash the bodies yesterday," he told AFP.

Muslims whose loved ones were gunned down have had their grief compounded by the failure of authorities to return bodies to families in time for a speedy burial, as required under Islamic custom.

Only six of the 50 victims have been returned to their families so far.

Authorities say they are doing all they can to speed up autopsies and the formal identification of those killed.

Police commissioner Mike Bush said that the process had been slow because of the need to identify victims conclusively and to avoid hindering the prosecution.

"It would be unforgivable to return the wrong body to a family," he told reporters on Wednesday, adding he hoped a further six bodies would be returned to families by midday.

So far 21 victims have been formally identified by the coroners, he added.

The killings have sparked global revulsion and a debate in New Zealand about the country's comparatively permissive gun laws and whether authorities have done enough to track far-right extremists.

Asked by a student how she felt, Ardern replied simply: "I am sad".

A day earlier Ardern vowed gunman Brenton Tarrant would face the "full force of the law" as she opened a sombre session of parliament with an evocative "as-salaam alaikum" message of peace to Muslims.

But she pledged that she, and much of New Zealand, would deprive the 28-year-old gunman of the publicity he craved by never uttering his name.

"He is a terrorist. He is a criminal. He is an extremist. But he will, when I speak, be nameless," she told assembled lawmakers.

"I implore you: Speak the names of those who were lost rather than the name of the man who took them."

Dozens of relatives of the deceased have begun arriving from around the world, some hoping to take bodies back with them.

Of the six bodies released so far, four are expected to be repatriated overseas.

Javed Dadabhai, who travelled from Auckland to help bury his cousin, said families and volunteers had been warned of a slow process.

"The majority of people still have not had the opportunity to see their family members," he told AFP.

In a rambling "manifesto," the gunman had said he was motivated partly by a desire to stoke a violent response from Muslims and a religious war between Islam and the West.

The Islamic State group, in a message on social media, appeared to encourage retaliatory attacks.

Following the mass shooting, Ardern has promised to reform New Zealand laws that allowed the gunman to legally purchase weapons used in the attack.

New Zealanders have already begun answering government appeals to hand in their weapons, including John Hart, a farmer in the North Island district of Masterton.

Hart said it was an easy decision for him to hand in his semi-automatic and tweeted: "on the farm they are a useful tool in some circumstances, but my convenience doesn't outweigh the risk of misuse. We don't need these in our country."

Ardern has said details of the proposed reform will be announced by next week, but she indicated they could include gun buybacks and a ban on some semi-automatic rifles.