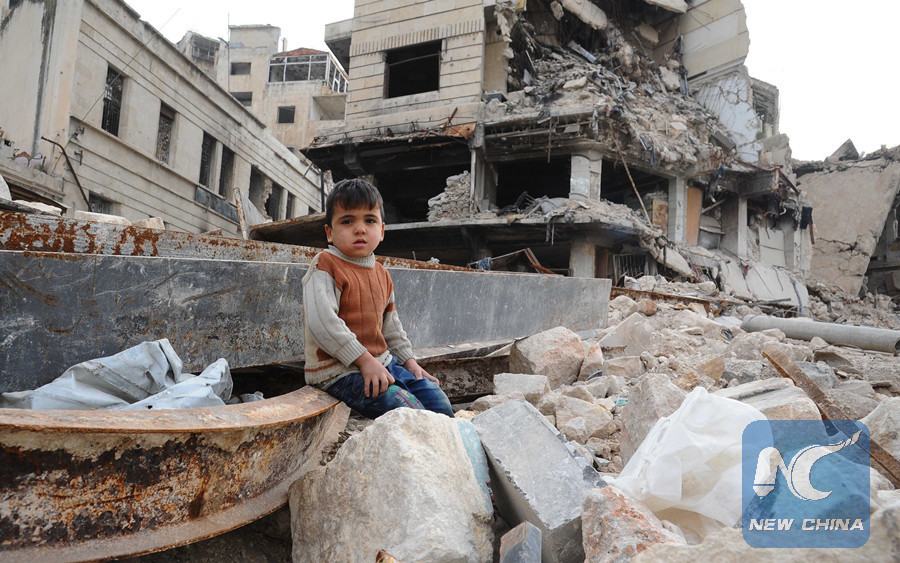 A boy sits amid the rubble in the largely destroyed part of Aleppo city in northern Syria, Dec. 21, 2017. Photo: Xinhua/Ammar Safarjalani

The Syrian government has allocated 60 billion Syrian pounds (roughly 138 million U.S. dollars) for the reconstruction of public service and the implementation of development projects in the northern city of Aleppo, state news agency SANA reported on Saturday.

The projects include rebuilding destroyed schools, clinics, and water and electricity networks as well as implementing agricultural projects, rebuilding soils and other infra-structure rehabilitation work.

Syria Prime Minister Imad Khamis, who is currently on a visit to Aleppo, said Saturday that the development and service projects have started in Aleppo a year ago, following the Syrian army's recapture of the former rebel-held part in eastern Aleppo, according to SANA, which said that the new budget is for completing the projects.

Khamis said that the government has a plan to accelerate the wheels of production in Aleppo, stressing keenness of his government to adhere to the demands of the merchants and industrialists in the city.

Khamis and other government members have visited Aleppo to check on the situation there, stressing that the Syrian government has started a new chapter in the process of rebuilding Aleppo.

The prime minister also declared the re-operation of the power station of Bustan al-Qasr in Aleppo with a capacity of 66/20 KV after the completion of rehabilitation work at a cost of 3 billion Syrian pounds.

Aleppo used to be Syria's economic powerhouse that has seen ferocious battles between the Syrian government forces and an array of militant groups, some of which were affiliated with the al-Qaida terror network.

In December of 2016, the Syrian army finished dislodging all the rebels in the eastern part of the city, which pushed some merchants and industrialists to resume their work, even though on a low scale.

The city needs a lot of work as the former rebel-held part and the industrial zones are largely in ruins.