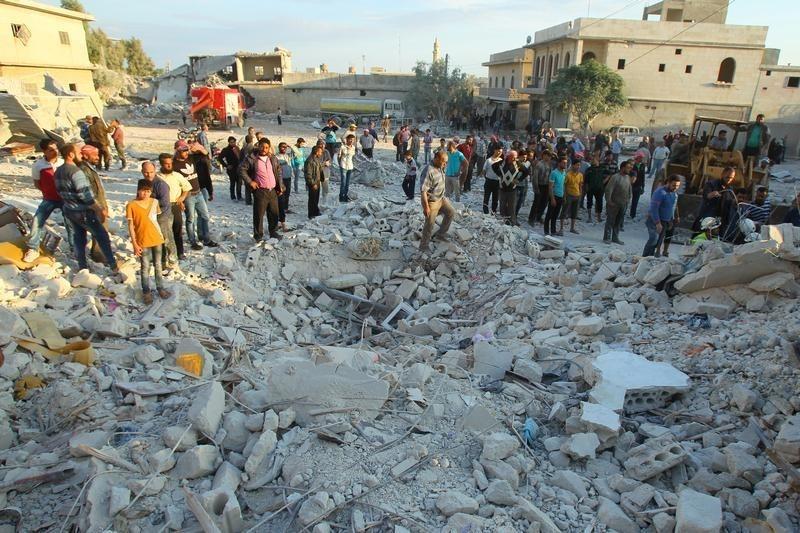 Rapid advances by the Syrian army into rebels’ largest remaining stronghold, Idlib province, have brought it closer to a key insurgent-held military airport and displaced tens of thousands of people struggling to find shelter in winter weather.

The fighting and air strikes have forced more than 60,000 people to leave their homes since Nov. 1, according to the UN Office for the Coordination of Humanitarian Affairs (OCHA).

In recent days the offensive has escalated, with forces progressing towards the strategic Abu al-Duhur military airport, to which rebels laid siege in 2012 before completely ousting Assad’s forces in September 2015.

A commander in a military alliance fighting in support of Damascus has said the army and its allies intend to capture the air base.

The Syrian Observatory for Human Rights said on Friday the Syrian army and its allies had taken around 84 villages since Oct. 22, including at least 14 in the past 24 hours.

The Britain-based war monitor said the rapid advance this week was made possible by intense air strikes which caused rebels to withdraw.

The Syrian army lost Idlib province, which borders Turkey, to insurgents when the provincial capital fell to insurgents in 2015. It became the only province fully under opposition control.

Tahrir al-Sham, spearheaded by al-Qaeda’s former branch in Syria formerly called the Nusra Front, is the main rebel force in the province.

A Syrian military source said the Nusra Front and its allies are the target of the military operation in northeast Hama and southeast Idlib provinces.

“The army’s operations there are continuing and the army is achieving advances. The terrorists (are facing) big losses in the area,” he told Reuters.

Idlib is part of Russian-engineered “de-escalation zones” meant to reduce fighting in western Syria. Turkish troops are also present in northern Idlib under the de-escalation deal struck with Assad’s allies Russia and Iran.

Tahrir al-Sham is simultaneously under attack from Islamic State, which has been expanding a small pocket of territory in northeastern Hama on the edge of the Idlib enclave since the Syrian army ousted it from central Syria in October last year.

Mustafa al-Haj Yousef, head of Idlib’s Civil Defence, rescuers who work in opposition-controlled areas of Syria, said: “If martyrs, the displaced, the injured, are on the rise, collapsing the houses, striking civilians, targeting civilians? It’s as if there’s no de-escalation.”

The United Nations said the situation of civilians newly displaced by the fighting in Idlib was “dire”, with humanitarian agencies struggling to meet their needs.

Yousef, of the Civil Defence, said that even after fleeing heavy frontline air strikes and shelling, people face an air campaign deeper inside the province.

He said there are not enough camps to cope with the flows, warning that if the army pushes up to Abu al-Duhur and beyond, “the displacement will double, it will multiply”.

“Most of them are sleeping on the ground, in tents that can’t protect from the rain or the cold. Some people are able to rent, but the rent prices have also been very high.”

Idlib has been a haven for tens of thousands of rebels and civilians forced to abandon their homes in other parts of western Syria that the government and its foreign military allies have recaptured.

It has also been the target of intensive Russian and Syrian air strikes that have killed thousands of civilians and destroyed hospitals and civil defense centers.

OCHA also said the fighting had forced some humanitarian organizations to stop work in parts of southern Idlib.

“The greatest need we’re seeing among people struggling to survive in this part of Syria is for food. Having been displaced repeatedly by conflict, they’ve exhausted their resources and are left with few choices, none of them good,” said Christy Delafield of Mercy Corps, one of the largest organizations delivering aid in Syria.

“It doesn’t look to us like things will get easier any time soon.”