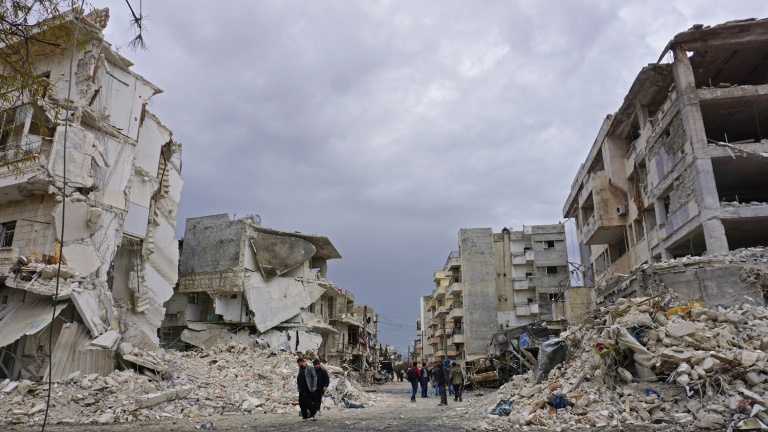 In this file photo taken on March 14, 2019 shows destruction following an airstrike in the jihadist-held city of Idlib, northwestern Syria. (Photo: AFP)

The chief of Hayat Tahrir al-Sham, the main jihadist group in Syria's northwestern Idlib, on Saturday refused any withdrawal from a future buffer zone after a truce went into effect in the area.

"What the regime could not take militarily or by force, they will not get through peaceful means or through negotiations and politics," said Abu Mohamed al-Jolani. "We will never withdraw from the zone."

Jolani made his comments during a meeting with reporters organised by the former Al-Qaeda affiliate group Hayat Tahrir al-Sham (HTS).

On Thursday the Syrian government agreed to a truce in the northwestern region of Idlib on condition that a Turkish-Russian buffer-zone deal is implemented, according to state news agency SANA.

Most of Idlib province and parts of Hama, Aleppo and Latakia -- which currently hosts some three million residents -- are controlled by the HTS.

The region is supposed to be protected from a massive government offensive by the Turkish-Russian deal, but it has come under increasing fire by Damascus and its backer Moscow since the end of April.

The government of Syrian President Bashar Al-Assad has accused Turkey of dragging its feet in implementing the deal, which provided for a buffer zone of up to 20 kilometres (12 miles) between the two sides, free of heavy and medium-sized weaponry.

"We will not change our position, neither at the request of our friends or our enemies," Jolani insisted, refusing any idea of a demilitarised zone.

Air strikes on the Idlib region stopped on Friday after the government's truce announcement but the fighting since late April has killed 790 civilians in regime and Russian attacks, the UK-based Syrian Observatory for Human Rights monitor says.

Fighting over the same period has claimed the lives of nearly two thousand combatants, including 900 regime loyalists, according to the monitor.

Around 400,000 people have been displaced and dozens of hospitals and schools damaged, according to the United Nations.

On Friday HTS warned that it would respond to any ceasefire violations by its enemies.

The Syrian conflict has killed more than 370,000 people and driven millions from their homes since it started with the brutal repression of anti-government protests in 2011.