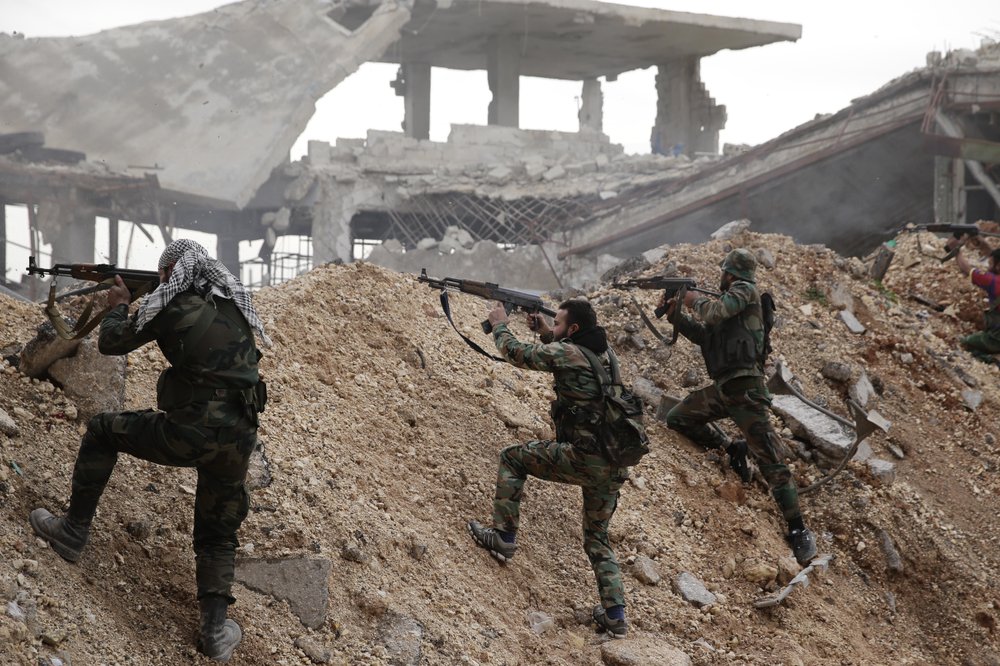 In this Dec. 5, 2016 file photo, Syrian army soldiers fire their weapons during a battle with rebel fighters at the Ramouseh front line, east of Aleppo, Syria. (Photo: AP)

In a world gripped by a pandemic, global unrest and a fast-moving news cycle, it can be difficult to remember that the war in Syria is still happening.

Even before the coronavirus outbreak took over daily lives around the globe, the conflict, which began in early 2011, had largely fallen off the world’s collective radars — reduced to a never-ending fight involving an ever-more complex web of players and refugees that few remember once lived in a country they called home.

But as it enters its tenth year, the war — which gave rise to the Islamic State group and triggered the worst humanitarian catastrophe of the 21st century — has shown it is still creating new tragedies that can have an outsized impact on global politics.

Earlier this month, Turkish and Syrian troops were clashing in Syria’s northwest. That brought NATO-member Turkey and Russia, which back opposing sides of the war, to the brink of direct confrontation, and produced an unprecedented wave of displaced people. Arguing that it faces a potential new influx of refugees from Syria, Turkey announced it would no longer stop its vast migrant and refugee population from illegally entering Greece, touching off a new crisis for the European Union.

More than half of Syria’s pre-war population of 23 million people have been driven from their homes, and a staggering 80% of the population live beneath the poverty line, according to the United Nations. Half the country lies in ruins. A political process does not exist. Contrary to what some may hope, the Syrian war is nowhere near its end-game.

CHAOS IN THE NORTH

A cease-fire brokered by the Turkish and Russian presidents in Moscow last week may have put the brakes on the Syrian government’s devastating military campaign to retake the northwestern Idlib province. But the halt is not a long-term solution, and the war’s final and most devastating chapter is yet to come.

In the three months before it was paused, the Syrian offensive triggered the largest single wave of displacement of the entire war. That may be dwarfed by the flight of humanity toward Turkey if Syrian President Bashar Assad resumes the assault to retake Idlib, home to some 3 million people. The area is the last remaining rebel-controlled area in Syria, and from Assad’s perspective, the only place standing in the way of complete military victory.

“Even if Idlib is somehow retaken and an estimated 3 million people are accommodated in Turkey or elsewhere, it is unlikely that Damascus has the capacity or even the tools to rule over formerly opposition-controlled areas for long periods of time without trouble,” said Danny Makki, a London-based Syrian journalist.

Similarly, a Turkey-Russia deal brokered in October ended a Turkish military campaign against US-allied Syrian Kurdish fighters in the country’s northeast. But the oil-rich region is still contested. There are hundreds American troops there, ostensibly on a mission to protect Kurdish-controlled oil fields from remnants of the Islamic State group.

Both US and Russian troops patrol the tense area separately, and thousands of Iranian-backed militias are stationed nearby.

‘A PERFECT STORM OF DEVASTATION’

Nearly a decade of fighting has transformed the Mideast country into a failed state providing free-for-all proxy battlefield where world powers can settle their scores.

Russia, Iran, Turkey and the US all have boots on the ground in Syria. The Lebanese Hezbollah group and a slew of other Iranian-backed militias are fighting there. Israel bombs inside Syria frequently and at will. The war has pulled in so many international players that one Syrian joke says perhaps the Syrian people are the ones who need to leave the country, so as not to disturb those foreign powers fighting on their soil.

Assad, who has been able to keep his grip on the central government from Damascus throughout the war, continues to chip away at rebel-held territory with Russian help. The rebel hold has shrunk in size from more than half of the country at one point to a tiny strip in Idlib province by the Turkish border now.

But many areas recovered by the government are a wasteland of wrecked buildings. Few refugees have dared to return, and reconstruction efforts are on hold, pending a political resolution.

Meanwhile, the economic situation is deteriorating so fast that ordinary Syrians struggle keep up with prices that rise even over the course of a day. The currency is collapsing: it now takes 500 Syrian pounds to get a dollar, 20 times the pre-2011 amount. The economic squeeze has been worsened by neighboring Lebanon’s acute financial crisis.

“It is a devastating dynamic, almost a perfect storm,” David Beasley, head of the World Food Program, told The Associated Press in a recent interview. “You’ve got the war, the devastation of the war on the economy for the last eight, nine, 10 years. But now you compound the Lebanese economic collapse because the Syria and Lebanon economy are tied together, and this is really becoming a perfect storm of devastation,” he said.

Even if Assad were to recapture remaining rebel-controlled territory, ruling it is another issue. His government’s policy of “reconciliation” in areas it already seized — effectively forced surrender of all opposition — has proven futile.

In Damascus, there has been a series of mysterious blasts targeting civilians and military personnel using explosive devices in the past three weeks.

In the southern province of Daraa, where the uprising against Assad began in March 2011, a reconciliation between the government and insurgents reached two years ago has crumbled with acts of violence reported almost on daily basis.

Ambushes, explosions and shootings left scores of fighters dead on both sides, and anti-government protests have re-erupted in some areas. Government forces responded with brute force earlier this year when tensions with insurgents turning into uprisings in several parts of Daraa, including the village of Sanamein.

The Britain-based Syrian Observatory for Human Rights, an opposition war monitoring group, said 217 people have been killed in violence in Daraa over the past months, including 45 civilians, 113 soldiers and pro-government gunmen, and 37 rebels who signed deals with the state in 2018.

“The growing insurgency in Daraa and the poor economic situation in Damascus is evidence that the war will not abruptly end, and in fact the socio-political and military circumstances are present to indicate that this will rumble on for many years to come,” Makki said.