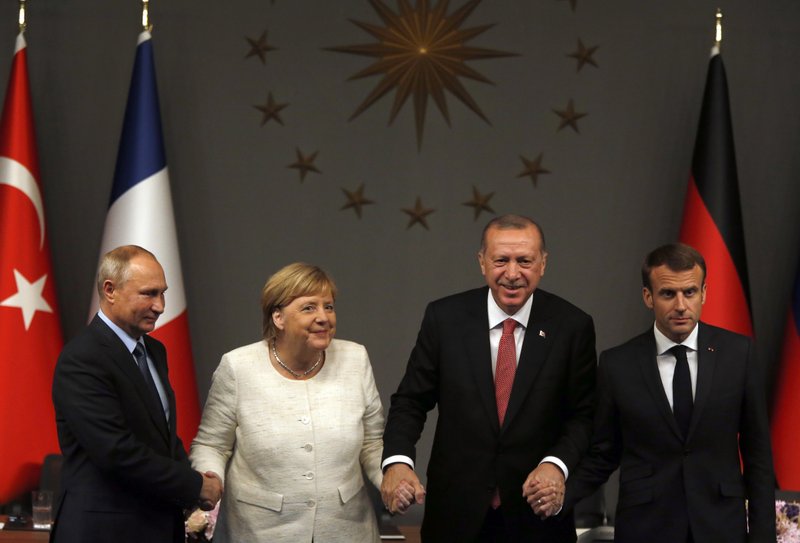 The leaders of Turkey, Russia, France and Germany said at a summit on Saturday that Syrians must lead efforts to make peace in their war-torn country, a challenge that was highlighted by the absence of any Syrian groups from the Istanbul talks.

Meeting in an Ottoman-era mansion, the leaders set aside divisions over Syrian President Bashar Assad to agree on broad goals, including the eventual, voluntary return of millions of refugees who fled a conflict that has lasted more than seven years and killed over 400,000 people.

“There will be no real, sustainable, credible return of the refugees if the political process is not initiated,” French President Emmanuel Macron said.

German Chancellor Angela Merkel stressed “preconditions” for the return of refugees, which must be closely coordinated with the U.N. refugee agency.

“From our point of view, it is necessary that there be assurances that there will not be persecution or arrests, that certain fundamental humanitarian conditions are fulfilled — that a certain humanitarian infrastructure is there,” she said.

A final statement released by the leaders called for “an inclusive, Syrian-led and Syrian-owned political process,” and the convening of a committee by the end of the year to work on constitutional reform as a prelude to U.N.-backed free and fair elections.

The leaders noted the cease-fire in Syria’s northwestern province of Idlib, which they hope can provide some momentum for peace efforts. The truce last month prevented a Syrian government offensive on the last rebel stronghold, which many feared would have set off another refugee crisis.

Idlib has been relatively calm since then, although both sides have accused each other of violating the deal. Syrian government forces shelled rebel-held villages in Idlib on Friday, killing seven people in violation of the agreement reached by Russia and Turkey, opposition activists said.

Putin, however, warned against any “armed provocations” by “radical elements” in Idlib that oppose the Syrian government, saying Russia will step in to support the Assad government if necessary. Russian military support, along with backing from Iran, has helped Assad to recover much of the territory lost to rebels in the last few years.

Western countries condemn Assad for what they call indiscriminate attacks on civilians and Turkey has been helping insurgents trying to remove him from power.

“For us, Assad is someone who has made attempts against nearly 1 million citizens’ lives. He is not in a respected position for us,” Erdogan said.

Since 2015, the European Union has been struggling to cope with an influx of refugees, many from Iraq and Syria, and European countries hope war-torn areas can stabilize so that people can return. Germany has pledged millions of euros to help restore basic services in areas not held by the Assad government.

The summit comes amid Turkish threats of a new military operation across the border into northern Syria, in zones held by Syrian Kurdish fighters. Turkey considers the Syrian Kurdish militia, which is backed by the U.S., to be terrorists and a part of the Kurdish insurgency within Turkey.