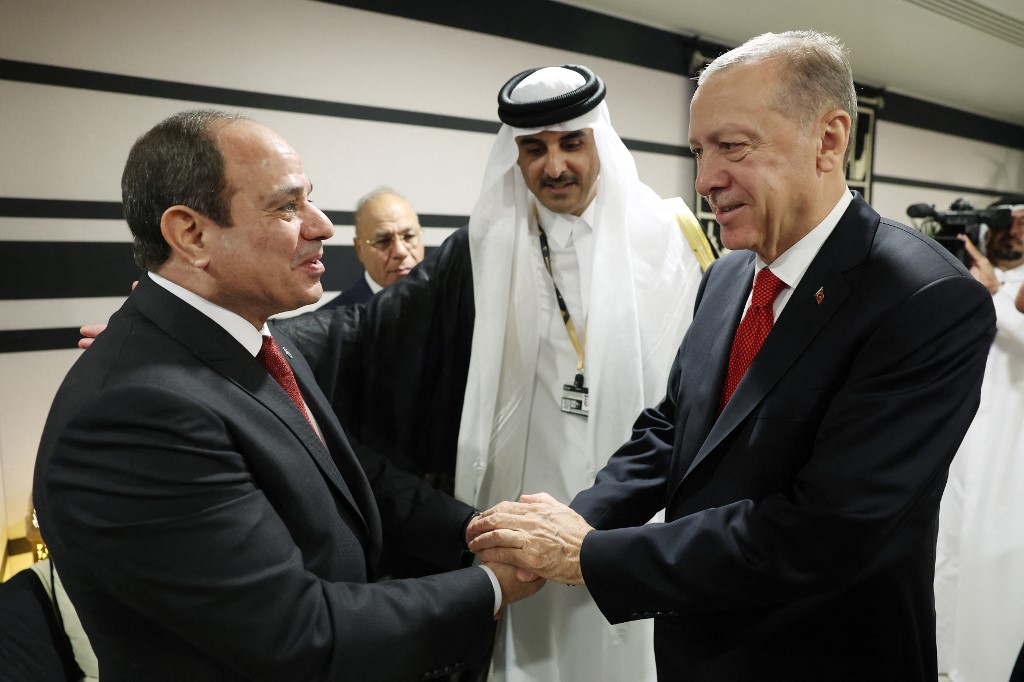 This handout photograph taken and released by The Press Office of the Presidency of Turkey on November 20, 2022, shows Turkish President Recep Tayyip Erdogan (R) shakes hands with Egyptian President Abdel Fattah el-Sisi as they are welcomed by Qatari Emir Sheikh Tamim bin Hamad al-Thani (2ndR) on the occasion of the opening ceremony of the 2022 FIFA World Cup in Doha, Qatar. (Photo: AFP)

"A step has been taken here to start such a process, and we have had talks," Erdogan told reporters on his homebound flight from Qatar, according to semi-official Anadolu Agency.

"We want to move a process that started with our ministers to a good point later, hopefully with high-level meetings," he said.

The Turkish president revealed that a message he had conveyed to Sisi was that Türkiye cherished the past "unity" between the two peoples and would love to "start it again."

Erdogan noted that what Ankara expects from Cairo was to "establish peace together against those who take a stand against" Türkiye and Egypt in the Mediterranean.

Erdogan and Sisi shook hands during their brief encounter in Qatar's capital Doha on the sidelines of the World Cup opening ceremony on Sunday, shows a photo attached to an Egyptian presidency statement released on Monday.

"The two sides underscored the profound historical bonds the two countries and their peoples share, As agreed, the encounter would mark the beginning of developing bilateral relations," a presidential spokesman was quoted by the statement as saying.

Türkiye's relations with Egypt turned sour after former Egyptian President Mohamed Morsi was ousted in July 2013 and his Turkish-backed Muslim Brotherhood group was outlawed, prompting the two countries to expel each other's ambassadors.

With conflicting positions over the conflict in Libya and the maritime borders in the Eastern Mediterranean region, Ankara and Cairo held their first diplomatic talks in eight years in 2021.

Türkiye has tried to mend its frayed ties with regional powers, including Egypt, Israel, Saudi Arabia and the United Arab Emirates in the past few years.