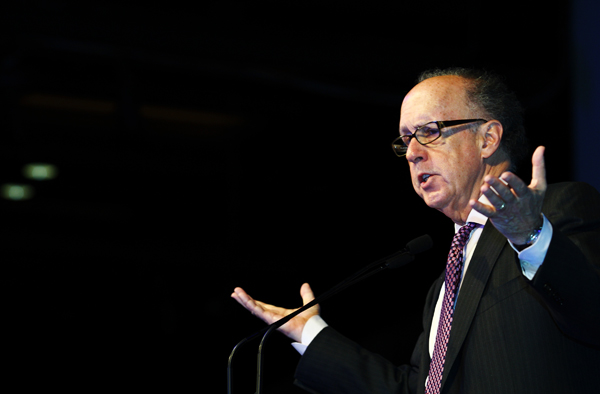 NEW YORK, April 12 (Xinhua) -- Now is the time for the United States and China to put aside differences and work together to tackle the global calamity of the COVID-19 pandemic, a renowned U.S. expert has said.

While countries like China and the United States are doing their best to control the problem in their own countries, it is also crucial for them to collaborate and form a global effort to contain the virus, as the pandemic is a global threat, Stephen Roach, senior fellow at Yale University's Jackson Institute for Global Affairs, told Xinhua in a recent phone interview.

"There's a lot that the United States and China can do to lead that process," said Roach, who is also a longtime watcher on U.S.-China relations.

"It's a great opportunity" for both countries to put aside the differences that have developed over the last couple of years with the trade disputes and blaming each other for COVID-19, and to collaborate in the areas of science and public health, information sharing, as well as public and private sector initiatives, according to the U.S. expert.

"I wish I could say that in the United States there are signs that we understand the need to collaborate with China," said Roach.

The renowned U.S. scholar, who is also the former chairman of Morgan Stanley Asia, said both sides are recommended to roll back all the tariffs that were put in place in the last year and a half.

"This is a time to rebuild trust, and to demonstrate through acts of good faith that we are willing to work together," Roach emphasized.

He said some U.S. politicians' practice of blaming China for the pandemic "has had an unfortunate impact on the relationship and on our willingness as a nation to shift from conflict to collaboration."

"When countries are great, they do great things. They put aside a false sense of pride," said Roach, adding that now is a time for both countries to join each other rather than to demonstrate some type of great-power rivalry.

The U.S. expert said he remains hopeful that the United States will be able to find that collaboration is "the only way out" in dealing with the unprecedented crisis.

Roach said the COVID-19 pandemic is also an important global shock, which "raises real questions about the globalization effort itself."

"I think a major lesson for the world is we've ignored the quality of global economic growth," while focusing too much on the speed or quantity of growth, he said.

"This is a real wake-up call that we need to look at the quality side of the growth equation much much more carefully than we have in the past," noted the U.S. expert, adding that "this is something that the world is responsible for, not one country or the other."