One year ago, Joe Biden strode into his first Group of Seven summit as president and confidently told the closest U.S. allies that "America is Back." Now, many of them are worrying that America is backsliding. 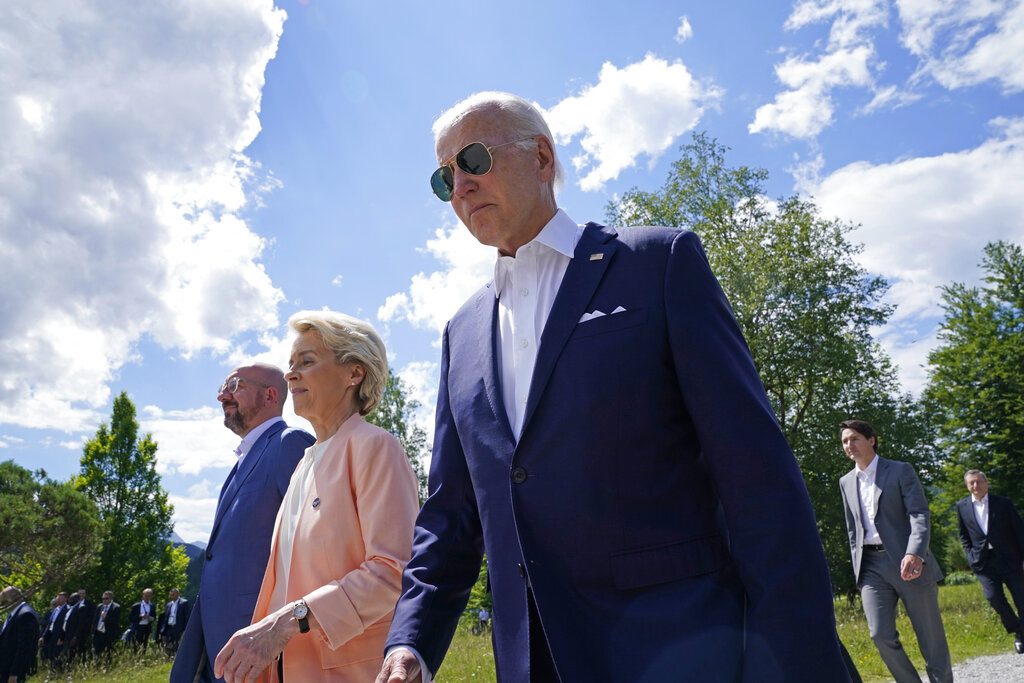 As Biden meets this week in the Bavarian Alps with the heads of G-7 leading democratic economies, he carries with him the domestic baggage of political unrest, shocking mass shootings and the U.S. Supreme Court's decision to end constitutional protections for abortion.

Biden's 2021 summit was meant as a palate cleanser to the "America First" ideology of his predecessor, President Donald Trump.

Biden's election was seen by most allies as an American reset, returning to norms honed over decades, with predictability and stability at the fore.

A year later, the reception for Biden remains warm and the public emphasis on America's global leadership remains upbeat — especially in the context of Biden rallying the world against Russia's invasion of Ukraine. But increasingly, that view is set against a backdrop of potential turmoil ahead.

"I think Europeans no doubt look at the U.S. domestic situation with a degree of dread," said Max Bergmann, director of the Europe Program at the private Center for Strategic and International Studies. He added: "It's sort of the best of times, the worst of times."

Biden's visit to Europe comes as a congressional committee investigates the attempted overthrow of the 2020 presidential election by Trump and his allies, whose party stands poised to make substantial inroads in the November midterm elections. The crisis of mass shootings and gun violence — uniquely American among similarly positioned nations — draws condemnation from horrified allies. And the high court decision that allows states to ban abortion sparked a fresh round of denunciations and worries from some of the United States' closest partners.

"Abortion is a fundamental right for all women," tweeted French President Emmanuel Macron. "It must be protected. I wish to express my solidarity with the women whose liberties are being undermined by the Supreme Court of the United States."

Biden told reporters Sunday evening that the subject of the abortion decision had not come up in his chats with world leaders.

"Not related to Ukraine or any of the issues discussed," he said, replying flatly "no" when asked if the matter was broached to him by another summit attendee.

Yet when the Supreme Court ruling came down Friday morning, Biden ended up being the third G-7 leader to offer reaction, with Canada's Justin Trudeau and Britain's Johnson quickly condemning the ruling even before Biden had delivered remarks at the White House.

"I've got to tell you I think it's a big step backwards," Johnson said Friday. "I've always believed in a woman's right to choose and I stick to that view and that's why the U.K. has the law that it does and we recently took steps to make sure those laws were enforced throughout the whole of the U.K."

Trudeau called the decision "horrific," adding: "No government, politician or man should tell a woman what she can and cannot do with her body." He said he couldn't "imagine the fear and anger" women in the U.S. must be experiencing in the wake of the ruling.

And after 19 students and two teachers were killed at an elementary school in Uvalde, Texas, condolences flowed in from Ukrainian President Volodymyr Zelenskyy, even as his own country's armed forces suffer many times that number in casualties due to Russia's aggression.

"The people of Ukraine share the pain of the relatives and friends of the victims and all Americans," he tweeted at the time.

Bergmann said that while European leaders might have varying opinions on the merits of the Roe v. Wade ruling, they have broad concern about the upheaval that the ruling could unleash.

"They saw the January 6th insurrection, they are very concerned about America's domestic stability and then here is a decision ... that clearly has the potential to upend and explode American politics and make America's political divides even deeper and that is something that's incredibly worrying," he said.

The Europeans, he added, look at U.S. domestic discord through the lens of their own security.

"The underlying concern is what's this going to mean for the United States as their security guarantor," he said. "Will America be stable enough to uphold that?"

Pressed on how the abortion decision would affect America's standing in the world, White House press secretary Karine Jean-Pierre called the ruling an "extreme decision" that endangered same-sex marriage and access to contraception by married couples. But she said Biden's position globally was unchanged.

"Look, we've heard from a lot of the leaders already," she told reporters aboard Air Force One on the way to Germany. "I know some of them have put out statements — very vocal — about what they have seen from this decision," saying they were "offering support to the American people."

"I don't think this stops the work that the president is going to do or wants to do or looking to do with leaders," Jean-Pierre added.

Johnson, for his part, denied he harbored specific fears about America's overall path.

"Looking from the outside, it was pretty weird," he told CNN on Sunday when asked about the Jan. 6, 2021, attempt to overthrow the presidential election. "But I don't believe that American democracy is under serious threat, far from it. I continue to believe that America is the greatest global guarantor of democracy and freedom."

Most G-7 nations tend to be more liberal than the U.S. on a range of issues, and Trump's flip questioning of longstanding alliances rattled more than just heads of state and government.

Biden's "America is Back" messaging has faced renewed scrutiny from everyday citizens of allied countries.

"I think America is divided," said Gabriele Jocher, 59, a freelance social worker from Garmisch, Germany, just miles from the summit site. "I think there are really very good forces and people who really want to move forward like that but also very backwards. And that just makes me think, globally, what's going on there that just like two forces are clashing."

Christina Maurer, 59, a homemaker and nurse in the picturesque town, added: "Everything that Mr. Biden wants to change now, I don't know. Then another one will come, his name will be Trump or something similar and he will ruin everything again."