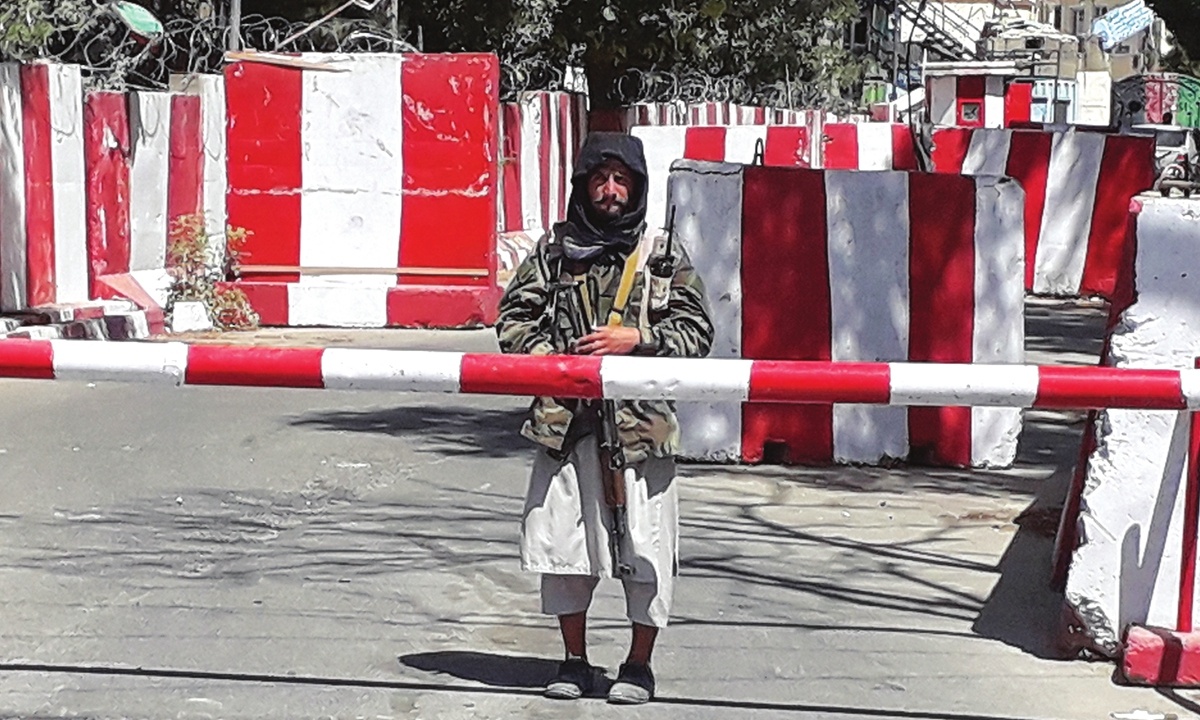 A Taliban fighter stands at the entrance of the police headquarters in Ghazni, Afghan on Thursday, as Taliban move closer to Kabul, Afghan capital, after taking Ghazni. (Photo: AFP)

Taliban insurgents captured the city of Ghazni on Thursday, the ninth provincial capital they have seized in a week, as US intelligence said the capital, Kabul, just 150 km to the northeast, could fall to the insurgents within 90 days.

The speed of the Taliban advance - they have captured eight provincial capitals in less than a week and are threatening to take at least three more - has sparked widespread recriminations of US President Joe Biden's decision to withdraw US troops and leave the Afghan government to fight alone.

The Taliban control about two-thirds of Afghanistan, with the last of the US-led international forces set to leave by the end of the month, and their guerrilla army has waged war on multiple fronts, resulting in thousands of families fleeing the provinces in hope of finding safety in the capital, Kabul.

"Fighting did not stop until 4 am and then after the first prayers it started up again," said an aid worker in the southern city of Kandahar.

Fighting has been extremely intense in Kandahar city, a doctor based in the southern province said earlier. The city hospital had received scores of bodies of members of the armed forces and some wounded Taliban. The Taliban said they had captured Kandahar's provincial prison.

The Taliban also said they had captured Ghazni city, 150 km southwest of Kabul. Gunfire could be heard in the background, as Reuters spoke to the provincial governor's spokesman. He said the militants had captured the prison there too.

The Taliban said they had captured airports outside the cities of Kunduz and Sheberghan in the north and Farah in the west, making it even more difficult to supply beleaguered government forces.

The Taliban said they had also captured the provincial headquarters in Lashkargah, the embattled capital of the southern province of Helmand, a hotbed of militant activity.

Bordering Pakistan, Kandahar and other southern and eastern provinces have long been Taliban heartlands but it has been in the north where they have made their biggest gains in recent weeks.

Faizabad city, in the northeastern province of Badakhshan, on Wednesday became the eighth provincial capital to be seized by the Taliban.

Desperate to stem the Taliban's advance, President Ashraf Ghani flew to Mazar-i-Sharif to rally old warlords to the defense of the biggest city in the north as Taliban forces closed in.

Ghani spent years sidelining the warlords as he tried to project the authority of his central government over wayward provinces.

The Taliban denied targeting or killing civilians and called for an independent investigation.