WORLD Taliban claims attack that killed US soldier in Afghanistan

Taliban claims attack that killed US soldier in Afghanistan 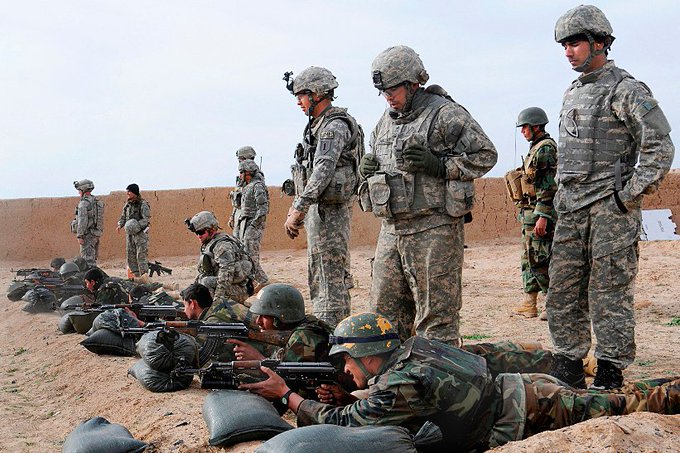 KABUL, Dec. 23 (Xinhua) -- One U.S. soldier of the NATO-led Resolute Support mission (RS) was killed during clashes in Afghanistan early on Monday and the Taliban militants claimed responsibility.

"A U.S. service member was killed in action today in Afghanistan," the coalition said in a brief statement.

The statement did not provide details, only saying "In accordance with U.S. Department of Defense policy, the name of the service member killed in action is being withheld until 24 hours after notification of next of kin is complete."

In the meantime, Zabiullah Mujahid, a purported Taliban spokesman, claimed that the insurgents' fighter launched an improvised explosive device (IED) against a joint Afghan-coalition patrol in Chahar Dara district of northern Kunduz province.

"Combined American invaders and their hirelings that tried to raid Haji Safarbai area of Chahr Dara district, Kunduz was targeted with IED resulting in one invader killed and another invader along with hireling commando severely wounded before rest fled," Mujahid wrote on Twitter.

The Afghan security forces have recently beefed up security operations against the Taliban militants who have been attempting to take territory and consolidate their positions in the countryside ahead of winter.

The Resolute Support mission is a NATO-led mission launched in January 2015 after NATO and U.S. forces ended their combat mission.

Around 16,000 foreign forces are currently stationed in Afghanistan for the mission to help Afghan forces in the fields of training, advising and backing them in the war on insurgents.

The latest casualty occurred as a U.S. delegation and Taliban representatives restarted earlier this month a stalled negotiation after a lull in Gulf state of Qatar.

The war in Afghanistan is the longest war in U.S. history. The death toll of U.S. service members has surpassed 2,400 since the United States invaded Afghanistan in 2001.