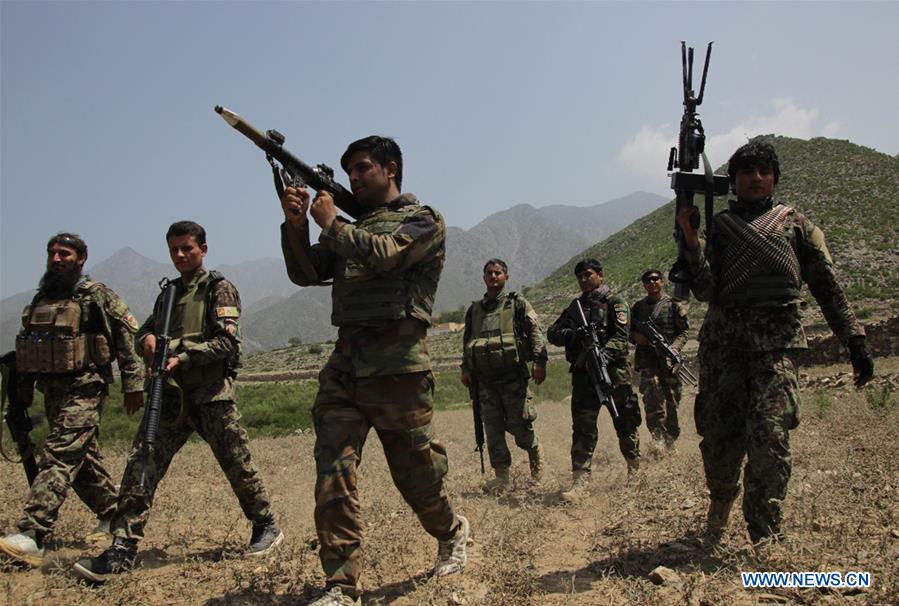 Afghan security force members take part in a military operation in Kunar province, eastern Afghanistan, Aug. 4, 2018. Scores of Taliban fighters have been killed over the past 24 hours as government forces have kept on pressure on militants elsewhere in the insurgency-plagued country, officials said Sunday. (Photo: Xinhua)

KABUL, Aug. 5 (Xinhua) --Scores of Taliban fighters have been killed over the past 24 hours as government forces have kept on pressure on militants elsewhere in the insurgency-plagued country, officials said Sunday.

In the latest waves of crackdowns against militants, the government forces stormed Taliban hideouts in Baharak district of the northern Takhar province late Saturday night, killing at least eight militants and injuring three others.

The government forces backed by aircrafts, according to Ghulam Hazrat Karimi, an army spokesman in the northern region, raided Taliban trenches in Baharak district late Saturday night, killing eight armed insurgents on the spot and injuring three others, besides destroying their arms and ammunition caches.

Similarly, the security forces, in crackdown against militants in Dihrawud district of southern Uruzgan province have killed 14 armed militants over the past 24 hours, an army official in the province, Major Yahya Alawi claimed.

The government forces have also killed 28 insurgents during series of crackdowns against militants in Khogiani district of the eastern Ghazni province since late Friday night, according to provincial police chief Farid Ahmad Mashal.

Moreover, according to an army official in the eastern Kunar province, Afghan forces Mir Wais Safi have inflicted casualties to the Taliban militants and reopened an essential road that links Ghazi Abad to the neighboring Asmar district.

However, Zabihullah Majahid who claims to speak for the Taliban outfit, has confirmed the clash with government forces in parts of the country but in counter-claim insisted the militant group had inflicted huge casualties to government forces over the past 24 hours.

In Afghanistan, since the warring sides exaggerate their gains, it is difficult to verify with independent sources the claims made by warring factions.