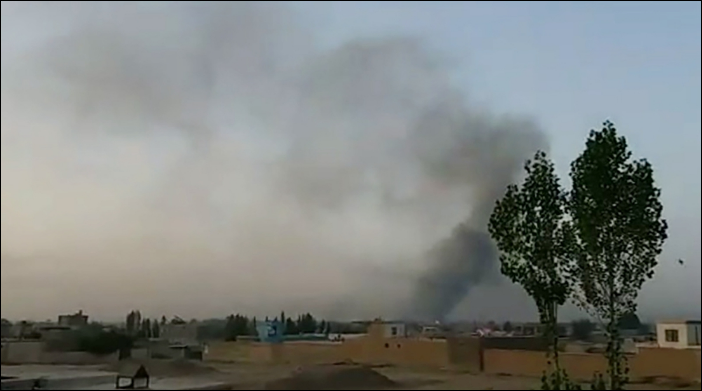 Smoke is seen rising into the air after Taliban militants launched an attack on the Afghan provincial capital Ghazni, August 10, 2018. (Photo: VCG)

However, the official claimed that the government forces have launched counter-offensive and cleanup operations are underway.

Zabihullah Majahid, Taliban's purported spokesman, has confirmed the offensive, telling media that the their fighters have overrun several security checkpoints outside Ghazni city.

Clashes between government forces and the Taliban started overnight, forcing authorities to close the highway linking it to Kabul, 150 kilometers (95 miles) to the northeast, officials said.

“The Taliban are dropping missiles near residential and commercial areas. There has not been a single minute of silence for the last eight hours,” said a senior government official in Ghazni.

A second government official said it was too dangerous for people to leave their homes and he had no immediate details on casualties.

Locals said all shops remained closed and smoke was seen rising out from a few areas in the city.

Mujahid claimed parts of the city had been seized by the Taliban and many people were killed.

The attack came amid growing hopes of talks to end 17 years of war in Afghanistan and less than two weeks before the Eid al-Adha festival, when the government in Kabul had been considering offering a ceasefire.

In June, a three-day truce over the Eid al-Fitr holiday brought unprecedented scenes of unarmed Taliban fighters mingling with security forces in some cities, offering a glimpse of peace and fueling hopes of negotiations to end the war.

The attack on Ghazni underscored how volatile the security situation across Afghanistan remains less than three months before parliamentary elections in October.