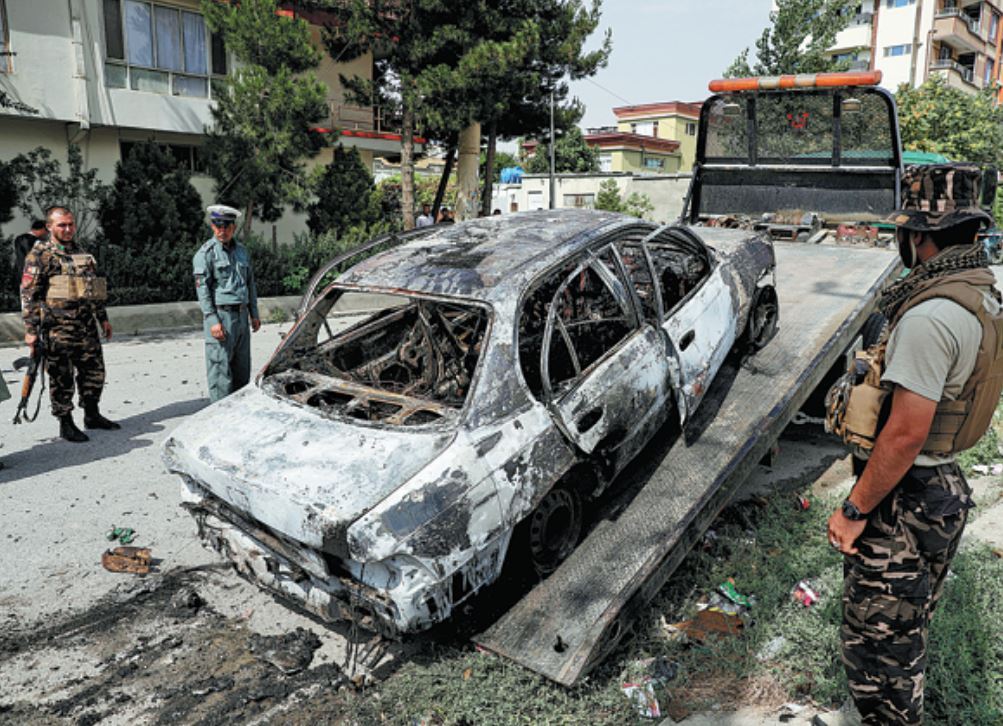 Security personnel inspect a destroyed vehicle believed to have been used to launch rockets in the attack on Tuesday in Kabul, Afghanistan. (Photo: AP)

KABUL, Afghanistan－At least three rockets hit near the presidential palace in Kabul on Tuesday shortly before Afghan President Ashraf Ghani was to give an address to mark the Muslim holiday of Eid al-Adha.

There were no injuries and the rockets landed outside the heavily fortified palace grounds, said Mirwais Stanikzai, a spokesman for the Interior Ministry.

No one immediately claimed responsibility for the attack, but police quickly fanned out across the area. One car parked on a nearby street was destroyed. Police said it was used as launchpad for the rockets.

The palace is in the middle of a so-called Green Zone that is fortified with giant cement blast walls and barbed wire, and streets near the palace have long been closed off.

The barrage came as the United States and NATO complete their final withdrawal of troops from Afghanistan. Many Afghans are worried that their war-ravaged country will fall deeper into chaos and violence as the Taliban gain more territory on the ground, having captured several districts and key border crossings with neighboring countries over the past weeks.

The withdrawal is more than 95 percent complete and the final US soldier will be gone by Aug 31, US President Joe Biden said in an address earlier this month.

"This Eid has been named after Afghan forces to honor their sacrifices and courage, especially in the last three months," Ghani said in his address to the nation following morning prayers for Eid al-Adha, also known as the Feast of Sacrifice.

"The Taliban have no intention and willingness for peace" Ghani said. "We have proved that we have the intention, the willingness and have sacrificed for peace."

Ghani said he deplored his government's decision to release 5,000 Taliban prisoners to get peace talks started last year as a "big mistake" that only strengthened the insurgents.

The palace was attacked last year as hundreds gathered for Ghani's inauguration for a second term as president, prompting some to flee. The Islamic State terror group claimed responsibility.

The Taliban have announced cease-fires during past Islamic holidays, offering respite to Afghans who can visit their families in relative safety, but no such offer was made on this occasion.

Meanwhile, Abdullah Abdullah, the No 2 official in the Afghan government, was inside the palace during the rocket attack on Tuesday. He returned on Monday from peace talks with the Taliban in Qatar.

The two days of meetings in Doha－the highest level of negotiations between Kabul and the Taliban so far－are aimed at jump-starting stalled talks but ended with a promise of more high-level talks.

Eid al-Adha is the most important Islamic holiday, marking the willingness of the Prophet Ibrahim－Abraham to Christians and Jews－to sacrifice his son. During the holiday, which in most places lasts four days, Muslims slaughter sheep or cattle and distribute some of the meat to the poor.