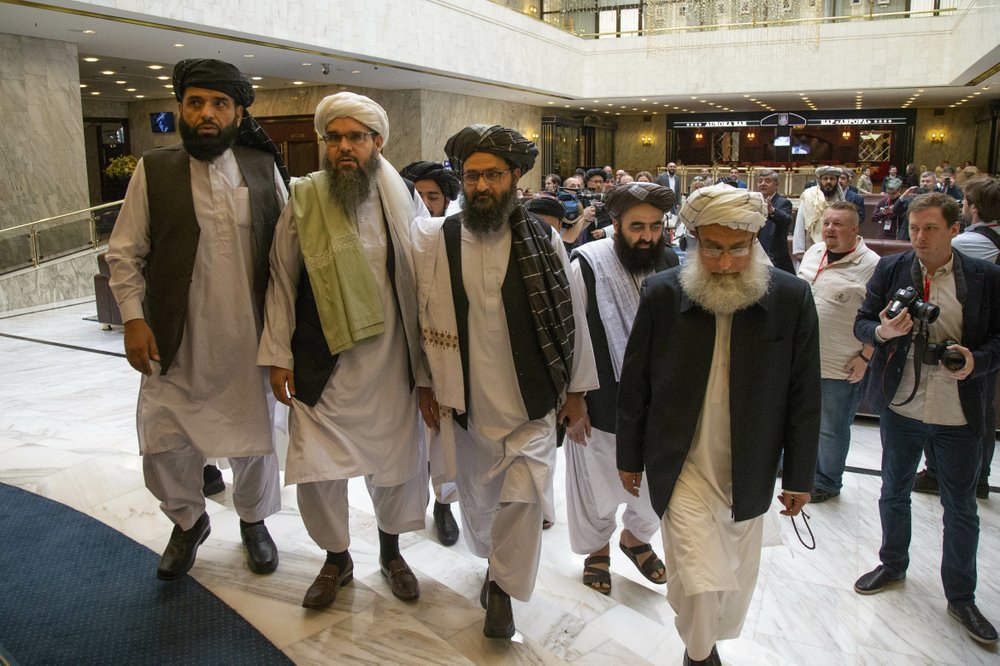 The United States began bombing Afghanistan after the attacks of Sept. 11, 2001, to root out al-Qaida fighters harbored by the Taliban. Now, more than 18 years later, preventing Afghanistan from being a launching pad for more attacks on America is at the heart of ongoing US talks with the Taliban.

President Donald Trump’s envoy at the negotiating table says he’s satisfied with the Taliban’s commitment to prevent international terrorist organizations from using Afghanistan as a base to plot global attacks. There’s even talk that a negotiated settlement might result in the Taliban joining the US to fight Islamic State militants, rivals whose footprint is growing in mountainous northern Afghanistan.

“The world needs to be sure that Afghanistan will not be a threat to the international community,” said the envoy, Zalmay Khalilzad, who was born in Afghanistan and is a former US ambassador to Afghanistan. “We are satisfied with the commitment that we have received (from the Taliban) on counterterrorism.”

Not everyone is convinced.

Some Afghans worry that Trump’s desire to pull American troops from Afghanistan will override doubts about the Taliban’s sincerity. Early in the talks, Hamdullah Mohib, national security adviser to Afghan President Ashraf Ghani, said counting on the Taliban to control other militants could be like “having cats guard the milk.”

Rep. Michael Waltz, who did multiple combat tours in Afghanistan as a US special forces officer, said he’s happy to see the Taliban are negotiating but does not see how Afghanistan can keep from becoming a hotbed for terrorists wanting to strike the United States.

“I have my doubts about the Taliban’s sincerity No. 1,” said Waltz, R-Fla. “But even if you buy into that ... how does the Taliban have the capability to enforce what a 300,000-man Afghan army, the United States forces and a coalition of armies around the world are continuing to struggle to do?”

Much is at stake.

The conflict in Afghanistan has cost more than 2,300 American lives and hundreds of billions in taxpayer dollars. The Taliban control roughly half the country, although not the cities. About 14,000 US troops plus other NATO-led forces are still there. Senior intelligence officials have warned that a withdrawal could return Afghanistan to a time when the Taliban ruled a country that was an al-Qaida stronghold.

A UN Security Council report in April 2018 said al-Qaida was “closely allied with and embedded within the Taliban.” The report said the Taliban, which have no history of conducting attacks outside Afghanistan, provide operating space for about 20 terrorist groups with thousands of fighters.

Bill Roggio, editor of the Long War Journal at the Foundation for Defense of Democracies, a conservative think tank in Washington, cites a video al-Qaida released in May that highlights its alliance with the Taliban and shows an image of militants fighting together under both al-Qaida and Taliban flags.

“The Taliban has not renounced al-Qaida nor is it likely to do so,” Roggio said. “The two remain close allies. The Taliban refused to hand over Osama bin Laden after 9/11 and was willing to sacrifice its control of the country. The Taliban has the upper hand now. There are no incentives to denounce its closest ally.”

A US intelligence official based in Kabul, the Afghan capital, told The Associated Press that the Islamic State group is an even bigger threat. The official, who discussed terrorist threats only on condition of anonymity, said recent IS attacks in Kabul are “practice runs” for more substantial ones in the future. The official said “one of the hopes of a negotiated settlement is that it will bring the Taliban into the government and into the fight against IS.”

The Islamic State group has expanded into eastern Kunar Province, where the US was forced to withdraw after several punishing attacks from the Taliban. That’s one reason the US wants to co-opt the Taliban: They clearly know the terrain and can take the fight to Islamic State forces.

Such an alignment is hardly unheard of. During the 1980s, the US backed Islamic insurgents in Afghanistan as they battled to end the occupation of the former Soviet Union.

Khalilzad hasn’t specifically said why he’s satisfied with the Taliban’s guarantee that it will prevent attacks from being plotted on Afghan soil. He says only that the “US military withdrawal will be linked to the commitments the Taliban are making.”

Suhail Shaheen, spokesman for the Taliban’s political office in Doha, Qatar, said such guarantees will be written into law once US and NATO troops leave the country.

“After withdrawal of foreign troops from the country and formation of a new Islamic government, legislation will be made that no one can use the soil of Afghanistan against US and its allies,” Shaheen said.

John Dempsey, senior adviser in the State Department’s Bureau for South and Central Asia, said Khalilzad not only has been given assurances from the Taliban but also is discussing ways the US will be able to verify them.

“He’s not going into the discussions naively and taking them at their word,” Dempsey said. “He’s in discussions on putting in place verification and enforcement and implementation guarantees. We’re not there yet.”

CIA Director Gina Haspel was asked about verification at a Senate hearing this year.

“If there were an eventual peace agreement, a very robust monitoring regime would be critical and we would still need to retain the capability to act in our national interest if we needed to,” Haspel said.

But Taliban spokesman Zabihullah told the AP that “neither the presence of American military nor intelligence is acceptable to us.”

Dempsey said that by Sept. 1, the US wants to resolve the issue about terrorist groups using Afghanistan to plot attacks and wants to draft a timeline for withdrawing troops. That agreement would allow more progress to be made in ongoing talks between the Taliban and Afghans. Women are especially fearful about the future because they were harshly repressed when the Taliban ruled the country from 1996 to 2001.

With deep ethnic fissures in the country and the Taliban’s refusal — so far — to negotiate with the current Afghan government, which it sees as a puppet of the West, these Afghan-to-Afghan talks are expected to be even harder than the US direct talks with the Taliban.