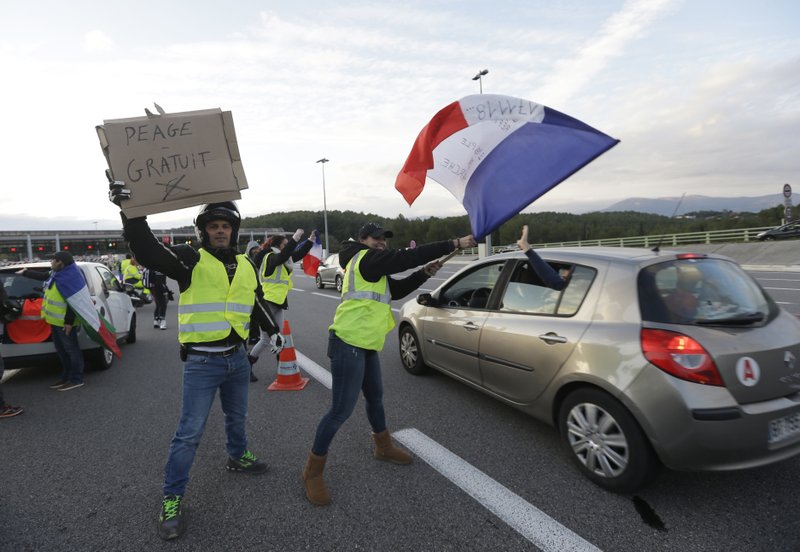 A planned meeting between France’s prime minister and a team of representatives of a nationwide protest movement collapsed Friday amid threats from some demonstrators and after a request to broadcast the talks live was rejected.

The fiasco came on the eve of protests planned Saturday across France, including on Paris’ Champs-Elysees avenue, where a demonstration last weekend turned violent. Shopkeepers on Friday prepared for the worst, barricading their boutiques.

The “yellow jackets” movement, heading into its third week, was triggered by rising fuel taxes but has grown to include an array of demands, becoming a major challenge to President Emmanuel Macron. So far, he has not backed down on scheduled fuel tax increases meant to wean France off fossil fuels.

“Yellow jackets” is a reference to the fluorescent security jackets worn by the protesters.

Jason Herbert said he cut short his meeting with Prime Minister Edouard Philippe after his request for a live transmission of the encounter was refused. Another protester remained, spending an hour with the prime minister but choosing to remain anonymous.

Philippe said later that his talks with the remaining protester were useful and his door was open if the “yellow jackets” choose representatives.

“So as not to betray anyone, I didn’t want to take part in a discussion,” Herbert said, reflecting the complex nature of the grassroots movement with no leaders.

The eight-member delegation set to meet the prime minister “no longer exists,” he said.

“We have all received enormous pressure ... threats, be they verbal or physical,” Herbert said. “Our lives are still at stake.” He said that 89 percent of the threats he received came from other “yellow jackets who maybe thought we were there for the glory.”

He described those proffering threats as people “terribly hopeless, terribly miserable (who) lost everything (because) everything was taken from them.”

“It’s as if there was a war. It’s incredible,” said Paris resident Olivier Le Quellec. “We are sealing off the center of the village. It becomes a little ghetto. It’s frightening.”

Motorists protesting a fuel tax hike have been joined by farmers, white collar workers, retirees and others in the “yellow jackets” movement that now involves a broad range of demands related to the country’s high cost of living.

Their list of demands includes tax cuts, the creation of a citizens’ assembly, state-funded subsidies to help companies boost hiring, and higher pensions and a higher national minimum wage.

A spokesman for France’s Union of National Police Chiefs said it was critical to be prepared for Saturday’s events.

“We can’t be naive. Tomorrow is a day of risks,” David Le Bars said on BFMTV.

The protests began to gain traction in neighboring Belgium as well, with dozens of “yellow jacket” demonstrators angry about high taxes and living costs causing traffic chaos in Brussels on Friday. They gathered near the Belgian government and the parliament, as police watched on with water cannon trucks parked nearby.

Recent polls show that up to 80 percent of the French are sympathetic to the movement. Some are latching on to denounce the perceived elitism of Macron, seen by some as being out of touch with ordinary people.

“Mr. Macron, you don’t deserve to eat my chickens,” poultry farmer Alois Gury said in a video made with his mobile phone, wearing a yellow jacket in his farm hangar as hens cackled. The video of the 33-year-old from eastern France quickly went viral this week on social media.

The chef at the Elysee presidential palace, Guillaume Gomez, has since said the farmer wasn’t among his suppliers.

“I’m in trouble ... My mother is buying 50 euros ($56) in grocery shopping every Tuesday because I don’t have the money,” he said.

The farmer is but one example of the diversity of the movement and the breadth of anger at Macron.

Prominent figures among the “yellow jackets” include a truck driver living south of Paris who makes live videos on Facebook, a singer from southern France who wrote a humoristic song to tell Macron “we want to pay less” and a 33-year-old founder of an online cosmetic shop who launched an online petition for a fuel tax cut that reached 1 million signatures.

A 51-year-old accordion player from western France, Jacline Mouraud, is considered a precursor of the movement since she posted a video on Facebook in mid-October that has tallied over 6 million views.