Talks resume in effort to end strike by LA teachers 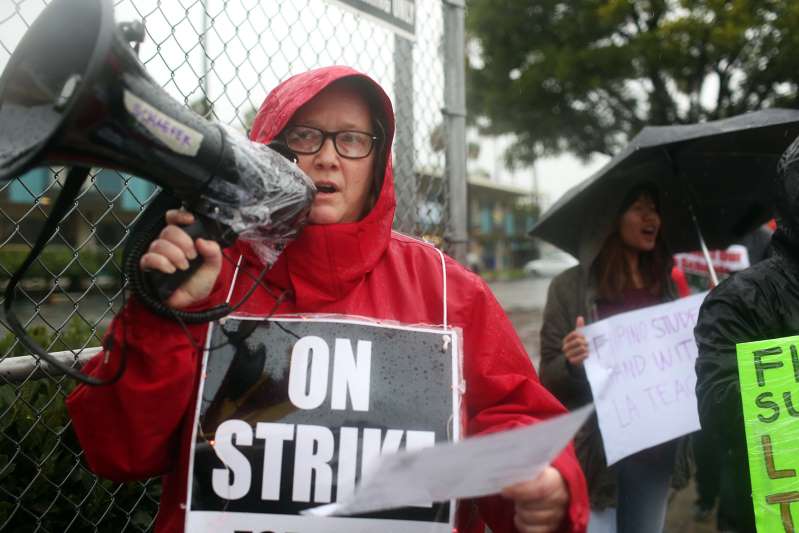 A new round of contract negotiations started Thursday between Los Angeles school district officials and a teachers union as thousands of educators picketed in the rain.

The announcement that the two sides would sit down for the first time in nearly a week didn't indicate whether any new contract offers would be on the table.

"After 21 months of negotiations I think it would be an unrealistic expectation to say that this is going to be over after today because there are hard issues to work through," said Alex Caputo-Pearl, president of United Teachers Los Angeles.

Talks broke off Friday, sending tens of thousands of teachers onto the street. Thursday was the fourth day of the walkout.

Mayor Eric Garcetti had urged both sides to resume talks on Thursday at City Hall. The mayor does not have authority over the Los Angeles Unified School District but he has sought to help both sides reach an agreement.

Clashes over pay, class sizes and support-staff levels in the district with 640,000 students led to its first strike in 30 years and prompted the staffing of classrooms with substitute teachers and administrators.

Parents and children have joined the protests despite heavy rain that has drenched the city. Overall attendance fell to 132,000 students on Wednesday.

With state funding dependent on attendance, student absences cost the district about $69 million over three days, the district said. At the same time, it doesn't have to spend about $10 million a day on teacher pay.

All 1,240 K-12 schools in the district were open — a departure from successful strikes in other states that emboldened the LA union to act.

The union rejected the district's latest offer to hire nearly 1,200 teachers, counselors, nurses and librarians and to reduce class sizes by two students. It also included a previously proposed 6 percent raise over the first two years of a three-year contract. The union wants a 6.5 percent hike at the start of a two-year contract.

District officials have said teacher demands could bankrupt the school system. Superintendent Austin Beutner has urged the teachers to join him in pushing for more funding from the state, which provides 90 percent of the district's money.