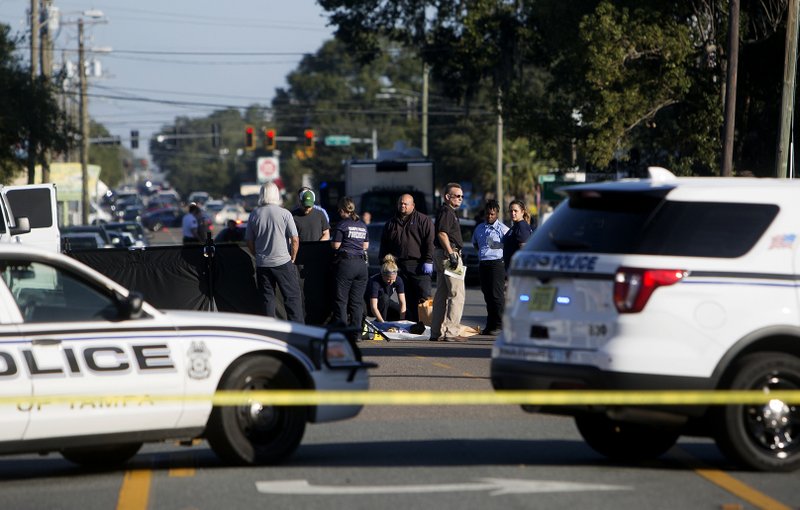 A police SWAT team and dogs searched a blockaded Florida neighborhood for a possible serial killer Tuesday after a fourth person was shot dead for no apparent reason.

Residents of the Seminole Heights neighborhood reported hearing shots just before 5 a.m. Tuesday. Officers quickly moved in, and found the body of Ronald Felton, 60, who had been walking across the street when a gunman came up behind him and fired, interim Police Chief Brian Dugan said.

“Our officers responded within seconds,” Dugan said, enabling them to quickly set up a perimeter.

“I believe that this person lives in this neighborhood,” Dugan added as he spoke with reporters at the scene. “And we need everyone’s cooperation; we need everyone to pay attention to what’s been going on.”

Dugan said that until his detectives can determine otherwise, Felton’s shooting will be treated as if it’s related to last month’s 10-day spree where three people were slain. The previous three victims were alone and had gotten off a bus in the neighborhood when they were gunned downed at night. None was robbed.

“This has got to stop,” Mayor Bob Buckhorn told a news conference on Tuesday. “We will hunt this person down until we find him.”

Cynthia Murray told The Tampa Bay Times that Felton had been living with her near the shooting scene. She said Felton was an unemployed construction worker who volunteered at the nearby food bank run by a church, which is just feet from where he was shot. She said he would go to the church at 2:30 a.m. to help.

“He didn’t need to come here every week but he loved it,” she said about Felton’s volunteer work. She said Felton and his twin brother Reggie were well known in the area.

“He was the sweetest person, never any problems,” his cousin, Linda Daniels, told the paper.

Police urged Seminole Heights residents to stay inside Tuesday as they searched the area with K-9 units and a SWAT team. They said they are looking for a thin black man, about 6-feet tall, wearing black clothing and carrying a large handgun. They are asking residents to examine video from any security cameras they have.

Hegarty said the suspect couldn’t have “gone very far, and we’re talking to as many people as we can to see what they may have seen.” Seminole Heights is a working-class neighborhood northeast of downtown Tampa that’s slowly becoming gentrified. Run-down homes sit next to renovated, historic bungalows, and trendy restaurants have sprung up near auto body shops.

Robert Clark told the Times he was in a nearby Laundromat with his girlfriend when he heard five shots, turned and saw a man run past. He said he went outside and saw Felton’s body.

After the earlier shootings, police increased patrols in the neighborhood and released surveillance videos of a hooded suspect. In a security video taken moments after 22-year-old Benjamin Mitchell became the first victim on Oct. 9, the suspect is running from the scene.

Two days after Mitchell was shot, Monica Hoffa, 32, was gunned down. And on Oct. 19, Anthony Naiboa, 20, was shot after taking the wrong bus home from his new job. Police patrolling nearby heard the gunshots and rushed to the scene to find Naiboa dead.

Jamie Rivera, 40, took his two children to school Tuesday and saw the heavy police presence. He turned on the radio and heard about the neighborhood’s fourth killing.

“We’re all panicking,” said Rivera, who is a carpenter. “It’s kind of scary because they don’t have any idea who’s doing it.”

Rivera has changed the routine of his two children, ages 9 and 11.

“Normally they do play outside but since this happened, no,” he told The Associated Press.

He had to go to a neighboring auto store for some parts Tuesday morning, and said he was headed to work. Otherwise, he said, he plans on staying inside.

Casimar Naiboa, Anthony Naiboa’s father, told the Times that Felton’s slaying “is like salt in the wound”

“It brings back dark memories,” said Naiboa, 50. “I still dream about my son.”

Police have told him they hope the killer makes a mistake.

“But every time he makes a mistake, someone loses their life,” Naiboa said.