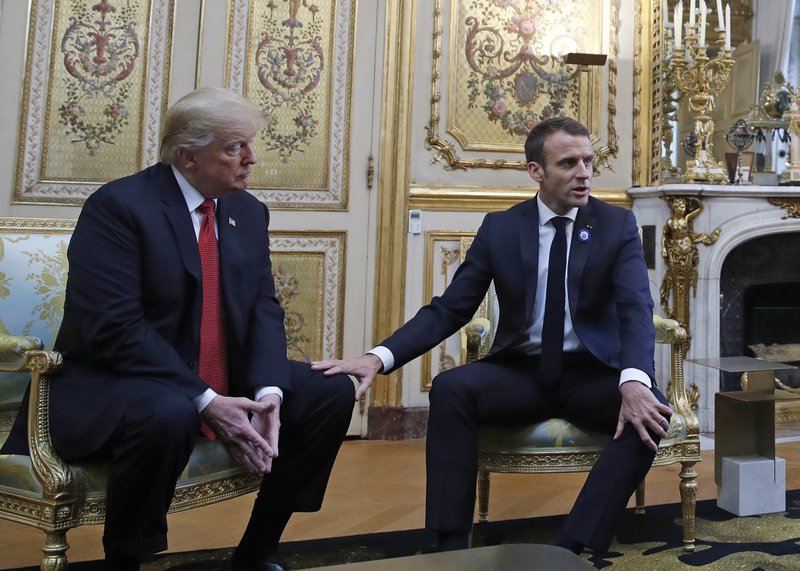 French President Macron touches the knee of US President Trump during their meeting inside the Elysee Palace in Paris Saturday. (Photo: AP)

First the never-ending handshake, then the dandruff brush — and now the thigh tap?

US President Donald Trump and French President Emmanuel Macron have had an unusual relationship since their first white-knuckle handshake at a NATO meeting last year, as newly elected Macron appeared to be trying to match the American president on the world stage.

When Macron went to Washington in April, Trump was unusually affectionate, brushing flecks off the French leader’s shoulder that he called dandruff and calling Macron “perfect.”

Yet tensions between the men have grown in recent months. The globalist, progressive Macron and nationalist, protectionist Trump have clashed on climate change, world trade and how to deal with Iran. Trump shot off an angry tweet about Macron before their latest meeting on Saturday in Paris.

As they met, Macron stood firm but also seemed eager to keep up a show of camaraderie. He called Trump “my good friend” — and reached out to pat the American president on the thigh after a reporter asked them about the tweet.

Trump was cordial in the meeting. During the thigh tap, however, he sat stone-faced.