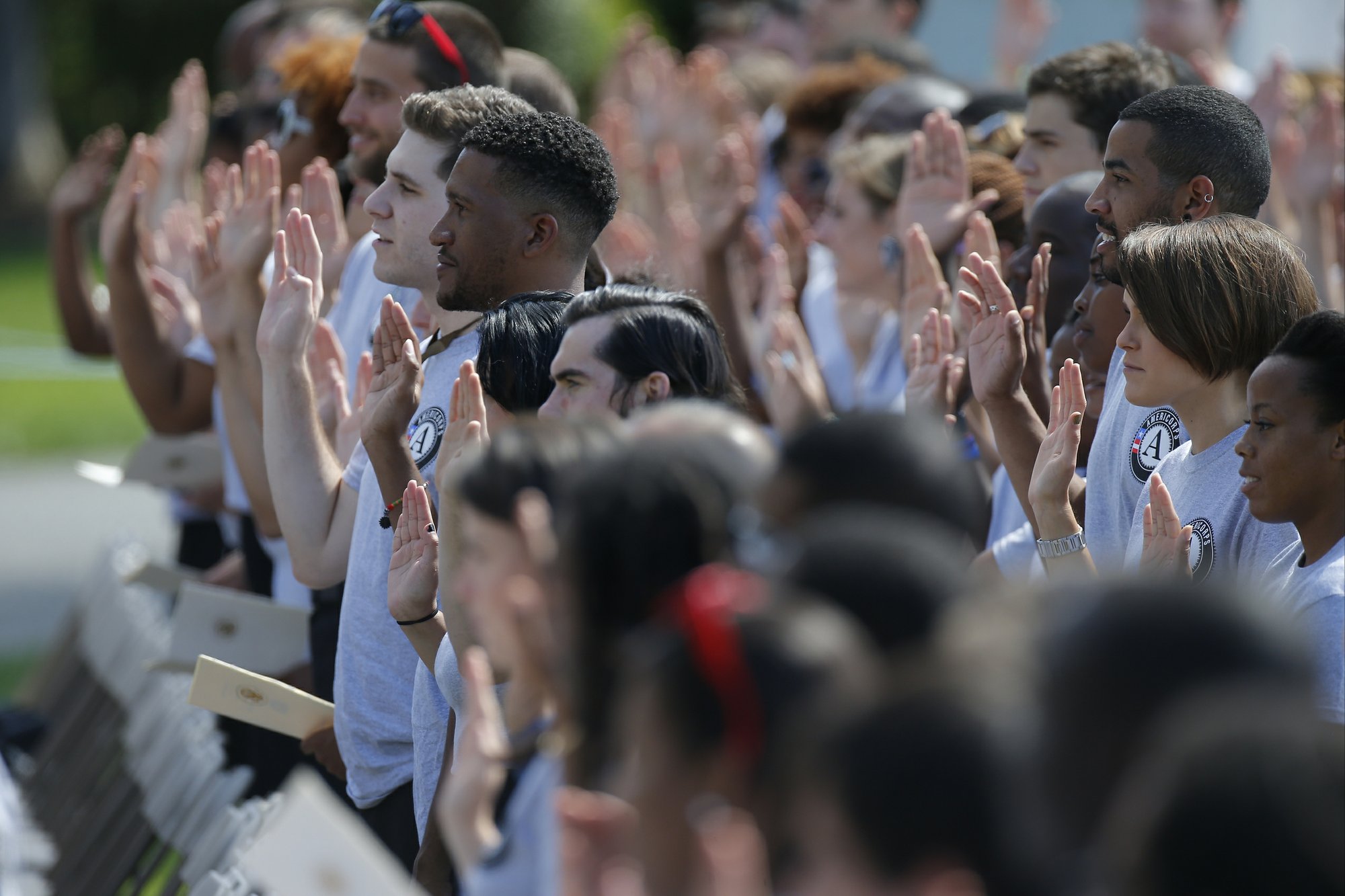 In this Sept. 12, 2014 file photo, AmeriCorps volunteers take a pledge as US President Barack Obama and former US President Bill Clinton mark the 20th anniversary of AmeriCorps, which promotes volunteerism and community service, on the South Lawn at the White House in Washington. (File Photo: AP)

Hundreds of Teach for America alumni are slamming the educator placement program for suggesting members should cross the picket line during a potential teacher strike in Oakland, California, or risk losing thousands of dollars at the end of their service.

More than 300 alumni signed the letter delivered Monday to Teach for America’s leadership, asking it to stop “pressuring” young teachers to break a strike that could come next week.

Payton Carter, a 1999 Teach for America alumnus and current Oakland teacher, said he was outraged that members may lose an award worth $2,000 to $10,000 — a financial incentive the nonprofit uses as a recruiting tool.

“We feel it’s really unethical and an unfair use of the funding, as basically financial leverage to coerce them into crossing the picket line,” Carter said. “No TFA corps member would willingly do that because of the professional damage to relationships.”

Spokesman Jack Hardy said Teach for America didn’t provide recommendations on what its 58 teachers should do in the school district, where a possible strike would affect 36,000 students. He said there’s a misunderstanding on the guidance it communicated outlining rules from AmeriCorps, a federal service program that bans striking and provides the awards at the end of teachers’ two-year service commitment.

“We don’t have a position on the strike or organizing. Our corp members, we stand behind them, we stand beside them. Our goal is to help them be successful,” Hardy said.

AmeriCorps spokeswoman Samantha Jo Warfield said striking is prohibited but that in these circumstances, it’s up to Teach for America to decide how to handle picket lines.

Hardy said Teach for America offered the same guidance during a strike last month by Los Angeles teachers in the nation’s second-largest school district and is exploring if it could help supplement an AmeriCorps award if a teacher loses it.

Teach for America has for years faced criticism and skepticism from those who call the education reform model disruptive to traditional public schools. Critics say it recruits underprepared or ineffective teachers who may see the two-year stint as a feel-good stepping stone rather than a career path.

Though the nonprofit vets its corps members for teaching jobs in underserved schools nationwide, the new teachers become employees of the school system and many join the teachers union.

In partnership with AmeriCorps, Teach for America members can apply for an education award at the end of their service to help pay off student loans.

Teach for America is by default forcing its members to make a political decision without a choice, said Ismael Armendariz, first vice president of the Oakland Education Association, which represents about 3,000 teachers.

“It’s also a political action to cross the picket line,” said Armendariz, who is a special-education teacher and 2012 alumnus of Teach for America.

Oakland teachers have voted to authorize a strike if their union can’t reach a deal with the school district on pay raises and smaller class sizes. The district faces a $30 million deficit and has offered a smaller pay bump than teachers are demanding.

No strike date has been set, with both sides waiting for a report from the Public Employment Relations Board that’s expected by Friday.

Oakland teachers are part of a wave of educator activism nationwide that started last spring. Teachers in Denver are in the second day of a strike Tuesday.