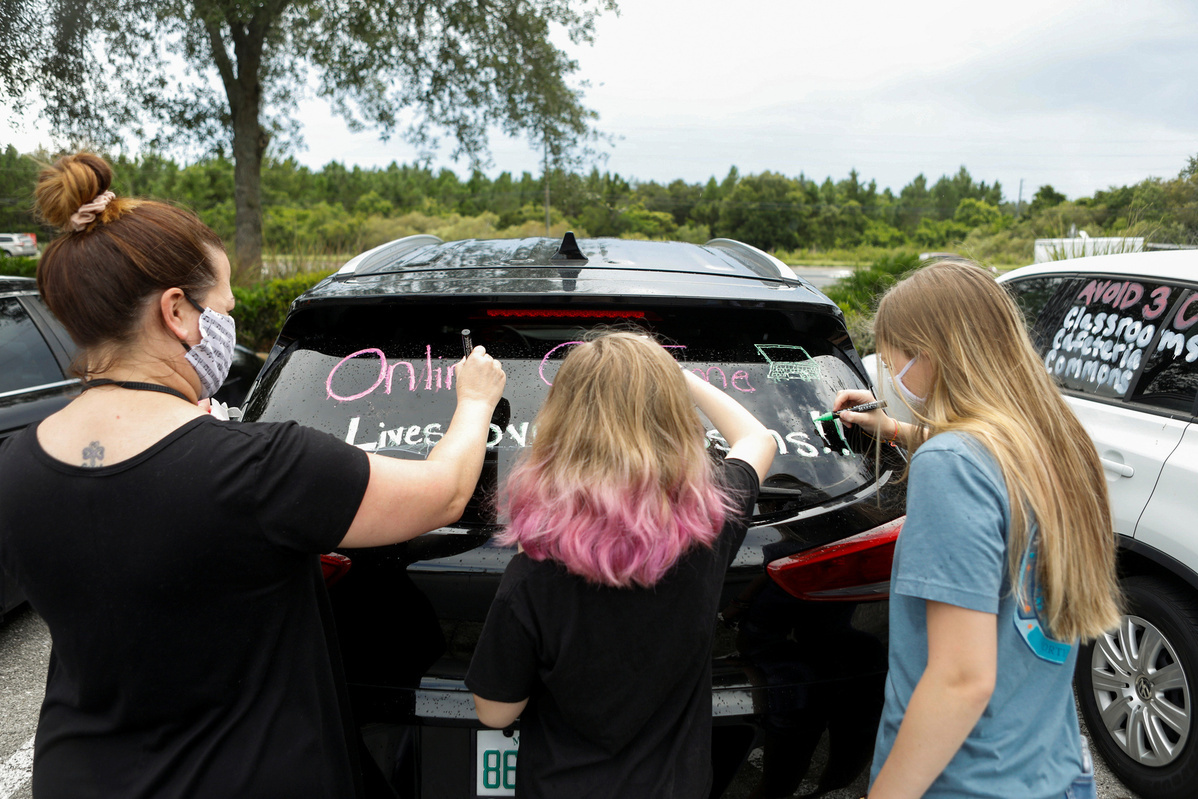 Teacher Hollie Morris and her two daughters, Mackenzie Tymon and Aislyn Morris, prepare for the parade protest where Florida teachers, whose unions are against their members returning to school, hold a car parade protest in front of the Pasco County School district office in Land O' Lakes, Florida, US on July 21, 2020. (Photo: Agencies)

Teachers across the United States are staging mass protests against the reopening of public schools amid the coronavirus pandemic over fears that they won't be safe despite the federal government's push for in-person classes to resume.

In Arizona, Florida, Missouri, New Jersey, North Carolina and several other states, teachers plan to or already have walked out and are supported by major teachers unions.

The protests are in reaction to President Donald Trump's demand that states reopen public schools for in-person teaching and not just the distance-learning that has been announced by a raft of school districts.

Teachers nationwide are demanding that districts ramp up safety measures to defend against COVID-19 by making face masks mandatory and extra ventilation in classrooms a priority.

Dozens of teachers met on Saturday at Mill Creek Park in Kansas City, Missouri, to protest the reopening of schools in the fall.

One teacher in Jacksonville, Florida, protested by holding a handwritten sign from her car window that read: "Lives over lessons." Her daughter held her own handwritten sign: "Keep my mom safe."

In Somerville, New Jersey, on Thursday, teachers from Somerset County walked up and down Main Street chanting: "Only when it's safe!"

Amy Six, a teacher from North Plainfield said: "I don't want to die."

In states that have already reopened for in-person classes, students and teachers at schools in Mississippi and Georgia have been diagnosed with the coronavirus.

The American Federation of Teachers (AFT), the nation's second-largest teachers union with 1.7 million members, said on July 28 that it would "support safety strikes" as a "last resort" if teachers believed that their school districts weren't taking enough precautions. Around 70 percent of teachers nationwide were members of a teaching union in 2016, according to The New York Times.

AFT President Randi Weingarten said at its recent convention: "If authorities don't protect the safety and health of those we represent and those we serve; nothing is off the table. Not advocacy or protests, negotiations, grievances, or lawsuits or, if necessary and authorized by a local union as a last resort, safety strikes."

The union adopted a resolution that school districts must wait to reopen classrooms until the transmission rate of coronavirus in an area falls below 1 percent and the daily community infection rate is below 5 percent.

The country's largest teachers' union, the Florida Education Association (FEA), sued that state's Republican governor, Ron DeSantis, last month over his push to fully reopen schools as the number of cases in the state spiked.

The Sunshine State, the new epicenter of the virus in the US, confirmed 4,752 new cases of coronavirus on Monday, bringing its total to 491,884, with a death toll of 7,157, according to the Florida Department of Health.

FEA President Fedrick Ingram said of the lawsuit in a statement: "Governor DeSantis needs a reality check, and we are attempting to provide one. The governor needs to accept the reality of the situation here in Florida, where the virus is surging out of control."

On July 8, Trump threatened to withhold federal funding to schools that refused to fully reopen with in-person classes.

He tweeted: "In Germany, Denmark, Norway, Sweden and many other countries, SCHOOLS ARE OPEN WITH NO PROBLEMS. The Dems think it would be bad for them politically if US schools open before the November Election, but is important for the children & families. May cut off funding if not open!"

Dr Deborah Birx, a member of the White House Coronavirus Task Force, appeared to distance herself from the administration's official line over the weekend, sounding a note of caution on reopening schools.

Birx told CNN: "If you have high case load and active community spread. … We're asking people to distance-learn at this moment so we can get this epidemic under control."