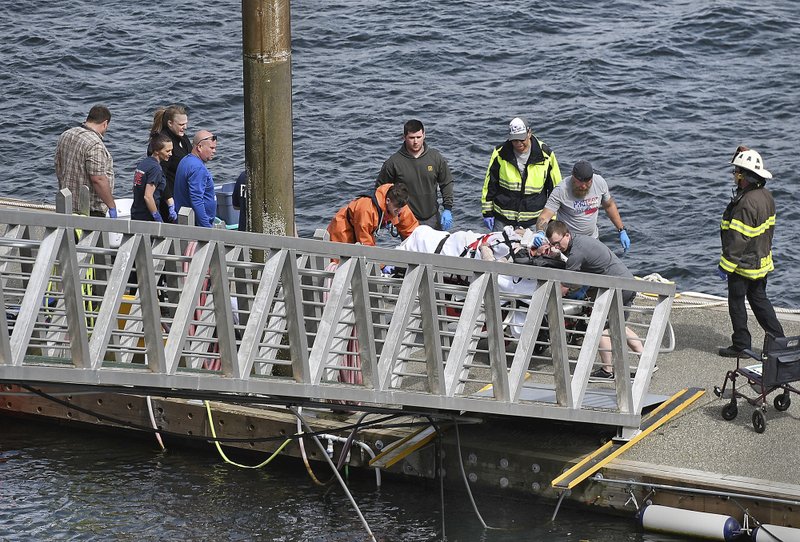 Emergency response crews transport an injured passenger to an ambulance at the George Inlet Lodge docks in Ketchikan, Alaska on May 13, 2019.  (Photo: AP)

A team of federal airplane accident investigators was expected to arrive in Alaska on Tuesday to investigate the cause of a midair collision between two sightseeing planes that killed at least four people.

Canadian officials said Tuesday that a Canadian was among the dead. Global Affairs Canada expressed condolences but did not identify the person because of privacy reasons, the government department said in a statement.

The Washington, D.C.-based investigative team from the National Transportation Safety Board was expected to arrive in Ketchikan Tuesday afternoon, agency spokesman Peter Knudson said. He said board member Jennifer Homendy also is traveling with the so-called “Go Team,” which investigates major accidents.

The floatplanes collided under unknown circumstances, Federal Aviation Administration spokesman Allen Kenitzer said in an email to The Associated Press. Floatplanes have pontoons mounted under their fuselages so they can land on water.

The passengers from the cruise ship Royal Princess were on sightseeing flights, one operated by Ketchikan-based Taquan Air.

Eleven people were in Taquan’s single-engine de Havilland Otter DHC-3 when it went down during its return from a trip to Misty Fjords National Monument, which is part of the Tongass National Forest, the nation’s largest. Ten people were taken to a Ketchikan hospital.

All patients were in fair or good condition, according to Marty West, a spokeswoman for PeaceHealth Ketchikan Medical Center.

Three of those who died were among five people aboard the second plane, a single-engine de Havilland DHC-2 Beaver, according to Coast Guard Lt. Brian Dykens. It was unclear which plane carried the fourth victim, whose body was recovered during a Monday night search, Rios said.

The 10 passengers on the Taquan Airplane were Americans and the other plane had two American passengers, one from Australia and one from Canada, Princess Cruises said in a statement.

“It’s been a long day and the crews have been working really hard to rescue people and recover the deceased,” said Deanna Thomas, a spokeswoman for the Ketchikan Gateway Borough the local government.

Taquan Air said the company suspended operations while the crash is investigated.

“We are devastated by today’s incident and our hearts go out to our passengers and their families,” Taquan said in a statement.

The cruise ship left Vancouver, British Columbia, on May 11 and was scheduled to arrive in Anchorage on Saturday.

“All of us at Princess Cruises are deeply saddened by this tragic news and we are extending our full support to the investigating authorities as well as the traveling companions of the guests involved,” the cruise ship company said in a statement.

The NTSB later determined that pilot error and lack of a formal safety program were among the causes of the June 2015 crash.