WORLD Tearful May calls time on premiership overshadowed by Brexit

Tearful May calls time on premiership overshadowed by Brexit 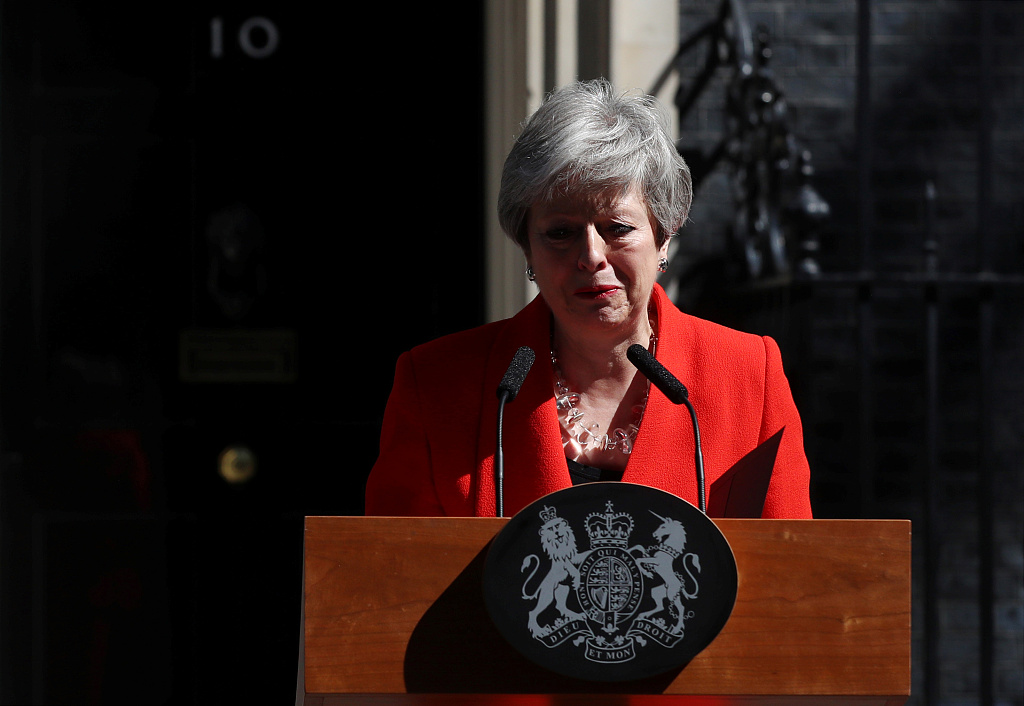 Photo: British Prime Minister Theresa May reacts as she delivers a statement in London, Britain, May 24, 2019./ VCG

Her voice breaking, Prime Minister Theresa May announced her resignation on Friday after three years of Brexit turmoil, dramatically increasing the likelihood of Britain crashing out of the EU within months.

May, who took over in the aftermath of the 2016 Brexit referendum, was forced to make way following a Conservative mutiny over her ill-fated strategy to end Britain's near five-decade membership of the European Union.

"It is and will always remain a matter of deep regret to me that I have not been able to deliver Brexit," May said outside her Downing Street office, holding back tears.

"It will be for my successor to seek a way forward that honours the result of the referendum."

May, 62, who will be among the country's shortest-serving post-WWII prime ministers remembered for presiding over one of the most chaotic periods in its modern political history, said she would step down as head of the Conservative Party on June 7.

She will remain in Downing Street in a caretaker role until a replacement is elected by the party before July 20.

Any new leader of the party, which won the most votes in the last election, automatically becomes prime minister.

Gaffe-prone Brexit cheerleader Boris Johnson, who resigned as foreign secretary last summer over May's withdrawal strategy, is the immediate front-runner to succeed her.

He said Friday that under his leadership Britain would leave the EU with or without a deal on October 31 -- the latest deadline agreed with Brussels after Brexit was twice delayed.

"The way to get a good deal is to prepare for a no-deal situation," he told an economic conference in Switzerland, according to Bloomberg. "To get things done you need to be prepared to walk away."

The pound wobbled as analysts said her imminent departure amplified the chances of leaving the EU without a deal.

Dutch Prime Minister Mark Rutte said the withdrawal plan agreed was "not up for renegotiation".

German Chancellor Angela Merkel said she "respects" May's decision and would keep working towards an "orderly" Brexit, while Irish Prime Minister Leo Varadkar warned the saga was entering "a phase that may be a very dangerous one for Ireland".

May received more sympathy from Brexit-backing US President Donald Trump, who said "I feel badly for Theresa. I like her very much. She is a good woman."

May was pushed into the humiliating spectacle of a hastily arranged resignation announcement following a meeting with the Conservative Party's committee chief in charge of leadership elections.

She had been under rising pressure following months of Brexit-fuelled political paralysis, which intensified following disastrous results in the May 2 English local elections.

The Conservatives are expected to fare even worse in this week's European Parliament elections when results are announced Sunday.

"Politically she misjudged the mood of the country and her party," said Nigel Farage, whose new Brexit Party is predicted to emphatically win the contest in Britain.

The beleaguered leader had previously vowed to step aside once her unpopular EU divorce deal had passed parliament, and this week launched a short-lived bid for lawmakers to approve it in early June.

MPs have overwhelmingly rejected the agreement three times, weakening May on each occasion

Her latest effort to force it through the House of Commons, which included giving MPs the option of holding a referendum on it, proved her final undoing, prompted a furious reaction from Conservatives, including cabinet members.

Her departure kickstarts a Conservative Party leadership contest -- already unofficially under way -- that is expected to encompass more than a dozen candidates and favour an ardent Brexiteer.

Tory MPs will hold a series of votes to whittle the contenders down to a final two that will be put to the party's more than 100,000 members.

Johnson is the membership's favourite, but numerous Conservative lawmakers are thought to hold serious reservations about his suitability for the top job.

May was the surprise victor in the 2016 leadership contest to replace then prime minister David Cameron after he quit following the EU referendum.

Despite having campaigned to Remain, she embraced the cause with the mantra "Brexit means Brexit".

However the decision to hold a disastrous snap election in June 2017, when she lost her parliamentary majority, left her stymied.

May will leave office without any significant achievements -- other than her bungled handling of Brexit, according to political analysts.

"She doesn't really have a legacy," said Simon Usherwood, of the University of Surrey.

"I think anybody in her position would have had great difficulty."

Others were more brutal in their assessment.

"It was only an impossible job because she made it one," said Tim Bale of Queen Mary University of London.