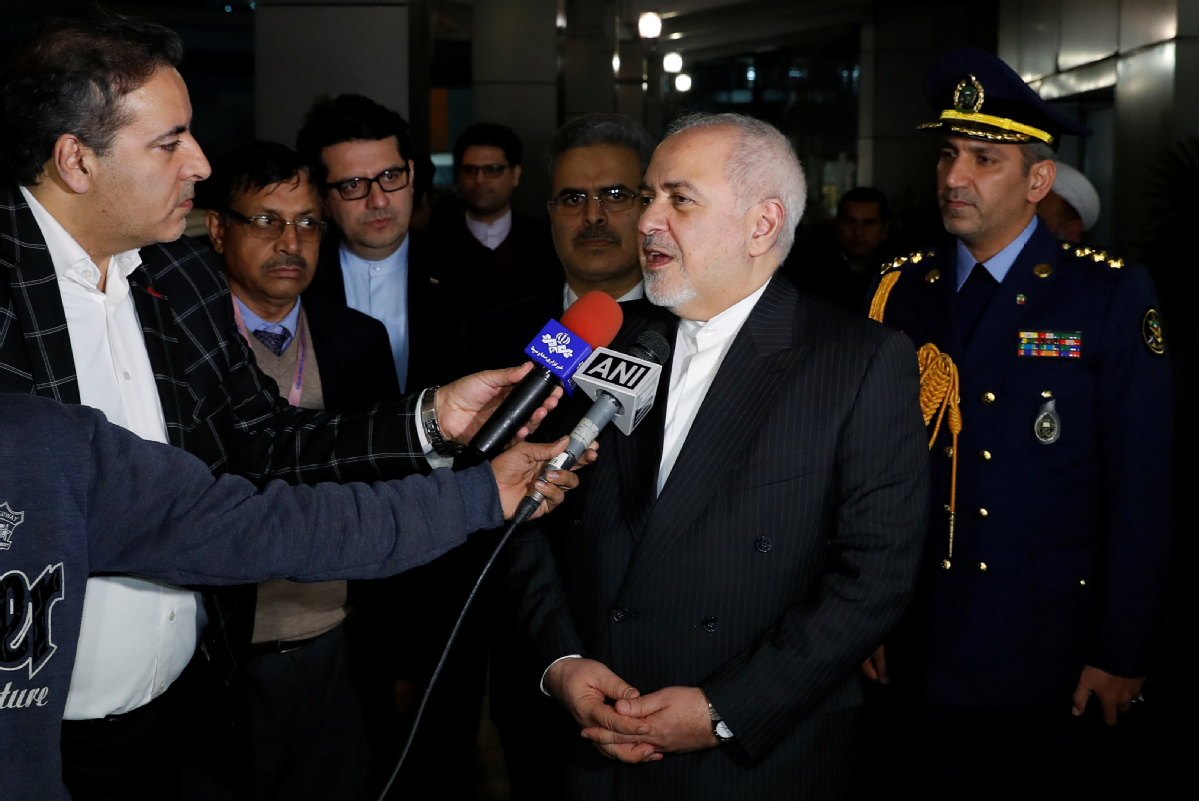 Iranian Foreign Minister Javad Zarif speaks to reporters upon his arrival at the airport in New Delhi, on Tuesday. (Photo: Reuters)

Three European countries have moved to accuse Iran of failing to keep to the terms of a 2015 deal aimed at curbing its nuclear program, sparking anger from Teheran at a time when calls have been made for a more conciliatory atmosphere.

Iranian President Hassan Rouhani on Wednesday criticized the action by the European parties to the nuclear agreement to trigger a dispute mechanism. The Europeans claimed that the Iranians had failed to fulfill their commitments.

Rouhani said Iran could reverse steps that exceeded restrictions in the agreement as soon as sanctions against the Islamic republic are lifted. The country has been struggling with the impact of sanctions imposed by the United States.

Britain, France and Germany－as signatories to the agreement－initiated the dispute process as a means of challenging Teheran over the breaches to the limits imposed on Iran's nuclear program under the accord. The move could eventually lead to the reimposition of United Nations sanctions that had been lifted under the deal.

The Europeans said that they had taken the step in response to Teheran's backing away from its nuclear commitments over the past months.

As one of the signatories to the pact, China regrets that Britain, France and Germany has triggered the dispute mechanism of the Joint Comprehensive Plan of Action, and does not believe it will help solve any problem or ease any tensions, Chinese Foreign Ministry spokesman Geng Shuang said at a news conference on Wednesday in Beijing.

It is China's consistent view that there are strong reasons behind Iran's reduction of compliance, said Geng, adding that the withdrawal from the deal by the US in 2018 was "the root cause of the tensions on the Iranian nuclear issue".

"We call on all parties to maintain calm and restraint, insist on resolving implementation differences through dialogues and negotiations under the framework of JCPOA Joint Commission, and restore the balance of rights and obligations in the agreement," said the spokesman.

Iranian Foreign Minister Mohammad Javad Zarif said on Wednesday that the Europeans' move was "legally baseless" and "a strategic mistake in political terms".

Zarif, in New Delhi for a security conference, criticized what he called the Europeans' failure to honor their own commitments to the deal.

Earlier on Twitter, the minister referred to the decision as a bow to the US "diktat", which "hasn't gotten it anywhere and it never will".

Russia, another signatory to the pact, said it saw no grounds for the mechanism to be triggered, warning that it risked causing a "new escalation".

"We do not rule out that the thoughtless actions of the Europeans could lead to a new escalation around the Iranian nuclear accord," the Russian Foreign Ministry said in a statement.

The three European countries said they still wanted the nuclear deal with Teheran to succeed and expressed "determination to work with all participants to preserve it".

"Our hope is to bring Iran back into full compliance with its commitments under the JCPOA," they said, adding that they were not joining a "maximum pressure" campaign that has been pursued by the US.

But British Prime Minister Boris Johnson called on Tuesday for US President Donald Trump to replace the 2015 deal with his own new pact to ensure Iran did not get an atomic weapon.

However, in a televised speech, Rouhani dismissed any so-called Trump deal aimed at resolving the nuclear row, saying it was a "strange" offer and criticized Trump for always breaking promises.

The Iranian president also told the US to return to the pact that Teheran struck with world powers, adding that Iran could reverse its moves to scale back its commitments under the agreement.

On Tuesday, Iran made its first arrests over the accidental shooting-down of a Ukrainian jet, which killed all 176 passengers and crew on board last week.

Iranian judiciary spokesman Gholamhossein Esmaili said some of those accused of having a role in the plane disaster had been arrested. But he did not say how many of them had been held, nor did he identify them.

A spokesman for Iran's Civil Aviation Organization, Reza Jafarzadeh, said on Tuesday that investigations by Canadian experts is underway at the crash site near Teheran, according to Iran's Islamic Republic News Agency.

Jafarzadeh said the Canadians had collected documents after a meeting between experts from Iran, Canada and Ukraine.

Canadian Prime Minister Justin Trudeau had asked for Kiev's help in talking to Iran about the work required for identifying the bodies of the Canadian citizens who were killed, the Ukrainian president's office said.

The Royal Canadian Mounted Police, which operates Interpol's national bureau in Canada, said it was working with Canadian police to collect DNA samples from the Canadian victims' families in Canada to assist with identification.

Among the victims were more than 140 Iranian nationals, with a large number of Canadians, along with those from Ukraine, Sweden, Germany and Britain.

AFP, Reuters and Xinhua contributed to this story.