Ten more on cruise ship off Japan have new coronavirus 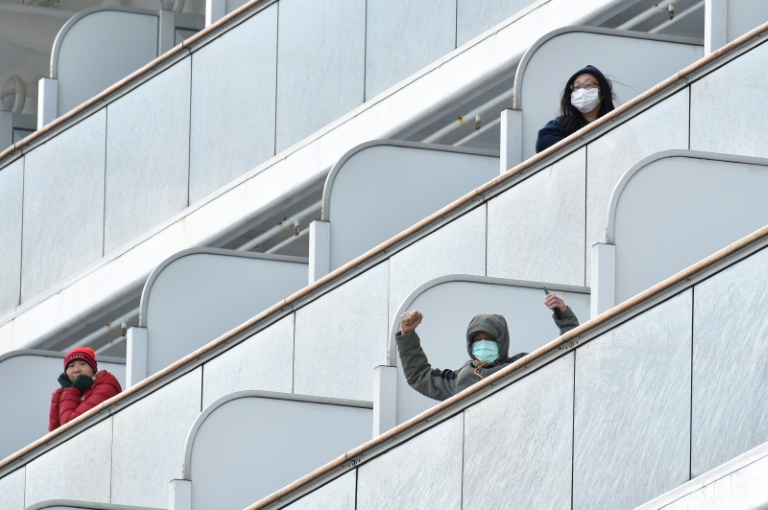 People on board have described confusion and boredom after being confined to cabins following the decision by Japanese authorities to quarantine the vessel. (Photo: AFP)

Ten more people on a cruise ship off Japan's coast have tested positive for the new coronavirus, the health minister said Thursday, raising the number of infections detected on the boat to 20.

Japanese authorities have tested 273 people among the approximately 3,700 passengers and crew on the ship after a man who got off the boat last month in Hong Kong was diagnosed with the new strain.

On Wednesday, "we received 31 test results, of which 10 were positive", Health Minister Katsunobu Kato told parliament.

"Now we have 71 more test results, of which 10 are positive for the new coronavirus," he added.

"I don't have immediate information about the current situation, but those who tested positive will be sent to hospitals."

The first 10 people diagnosed with the new virus have already been removed from the ship, which on Thursday morning docked in the city of Yokohama to resupply for a quarantine that could last 14 days.

At the port, officials could be seen dressed in white full-body protective suits, complete with face masks and helmets.

An extendable white-tented passageway was wheeled to a door on the side of the massive cruise ship, apparently to protect the identity of people being evacuated from the boat.

Passengers have been told they may have to stay aboard for 14 days even if they test negative for the virus. Several came out onto balconies as the ship docked on Thursday, some waving to assembled media or taking pictures.

People on board have described confusion and boredom after being confined to cabins following the decision by Japanese authorities to quarantine the vessel.