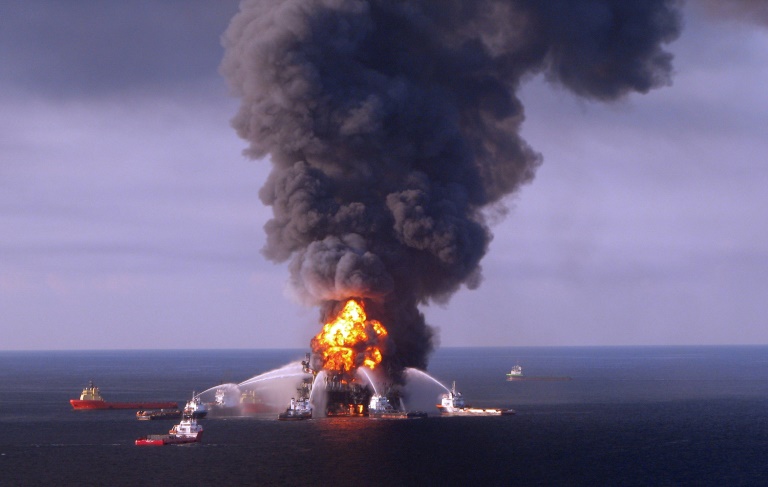 The Deepwater Horizon oil-drilling platform is shown in flames in the Gulf of Mexico two days after an explosion killed 11 workers on the rig. (Photo: AFP)

On April 20, 2010, the explosion of BP's Deepwater Horizon drilling platform claimed the lives of 11 workers and unleashed a torrent of more than four million barrels of oil into the Gulf of Mexico.

A decade later, the practice of deepwater drilling remains widespread off the lengthy coasts of the United States.

While government oversight was tightened in the wake of the environmental disaster, conservationists say the risks of a new leak could be growing as falling prices may lead to staffing cuts by the big producers.

Today, oil rigs continue drilling off the shores of Alaska and California, but the vast majority (nearly 1,900) is in the Gulf of Mexico, off the coasts of Florida, Alabama, Mississippi, Louisiana and Texas.

Around 17 percent of the country's crude oil and five percent of its natural gas comes from this huge maritime zone, according to the US Energy Information Administration (EIA).

Offshore drilling rigs, their productivity steadily increasing due to technological advances, have long been considered as the most profitable way for the United States to ensure energy independence.

"Deepwater was drilling deeper than almost any well available at the time," said Phil Flynn, an energy analyst with the Price Futures Group. "It was the equivalent of landing a man on the moon."

But in recent years deepwater drilling has lost some of its shine as new techniques for hydraulic fracking -- injecting liquid deep into the earth to release natural gas at relatively modest cost -- have gained ground.

Following the Deepwater Horizon explosion, the US government strengthened regulations around deepwater drilling.

Starting in 2011, former president Barack Obama's administration created the Bureau of Safety and Environmental Enforcement (BSEE), separating its activities from those related to promoting the petroleum industry -- two sometimes conflicting missions that up to then had both been managed by the same agency, the Minerals Management Service (MMS).

The big petroleum companies were also required to provide greater guarantees that they were properly managing the risks linked to offshore drilling.

In the meantime, those companies have developed increasingly effective systems for more rapidly containing any explosions that do occur.

In 2010, the states around the Gulf of Mexico watched with mounting concern as it took BP nearly three months to halt the Deepwater Horizon leak, which fouled beaches, damaged tourism and killed millions of sea creatures.

BP spent tens of billions of dollars to clean up the oil spill, settle various law suits, compensate companies that had suffered spill-related losses, and help restore the region's environment.

"All the other companies learned a lot from the bad experience that BP had and improved their operations internally," said Donald Boesch, who served on the commission established by Obama to investigate the causes of the accident.

"Some have developed more precautions and devoted more efforts than others into this," added Boesch, a professor of marine science at the University of Maryland.

President Donald Trump's objective of making the United States the world's top oil producer, a goal attained early in 2018, led to a weakening of the rules regulating the industry.

The Trump administration's "philosophy is more supportive of the growth of oil production in the US, and deregulation," Boesch said.

In January 2018, the White House announced its intention to open almost all of America's coastal waters to oil and gas drilling, a decision that sparked sharp resistance from several states and is the subject of several still unresolved legal battles.

"Instead of learning lessons from the BP disaster, President Trump is proposing to radically expand offshore drilling, while dismantling the few protections put in place as a result of the catastrophic blowout," said Diane Hoskins, a campaign director for the nonprofit Oceana, which works on ocean conservation issues.

Oceana, in a report published Tuesday on the economic and ecological consequences of the Deepwater accident, concludes that a new disaster is more, not less, likely than it was 10 years ago.

Oil-rig safety and governmental oversight have "not improved," the report states, adding that "expanding this industry to new areas puts human health and the environment at risk."

The current crisis facing the petroleum industry -- hit hard by the sharp drop in consumption and in world oil prices amid the global coronavirus pandemic, makes the picture even more worrisome, some analysts say.

"If the companies are under financial stress, they have to cut costs by reducing the number of their employees. With that comes risk," Boesch said.

"That's what we saw during the Deepwater accident," he added. "They were behind schedule drilling that well. Their decisions were affected by a desire to finish up quickly, so they cut corners.

"I'm concerned the situation is set up so that it could happen again."