Tens of thousands march in London for second Brexit vote 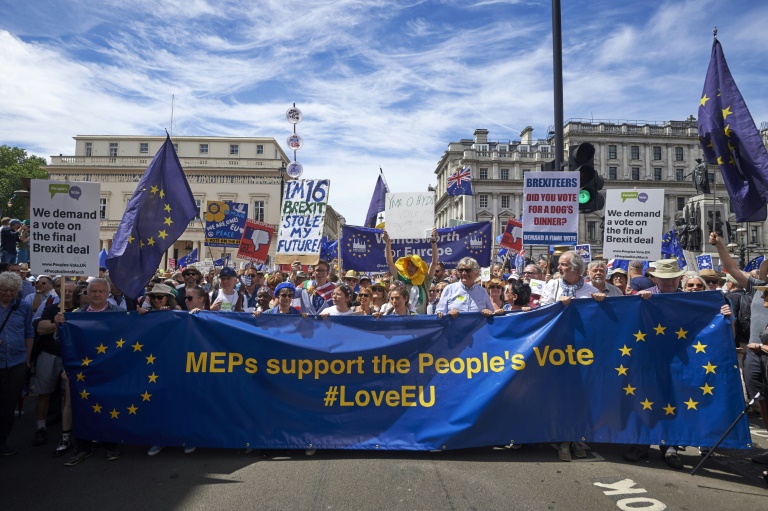 Anti-Brexit campaigners are demanding a "people's vote" on whether to approve any final deal on Britain's divorce from the EU (Photo: AFP)

Tens of thousands of people demonstrated in London on Saturday calling for a second vote on Britain's departure from the European Union.

The anti-Brexit campaigners marched on parliament to mark the second anniversary of the Brexit referendum, demanding a "people's vote" on whether to approve the final deal Prime Minister Theresa May strikes with the EU, if an agreement is struck at all.

"I was in deep tears when the referendum happened, it looked like the future was pretty bad," said Chiara Liduori, a 40-year-old Italian living in London.

"Brexit is awful not only because we want to keep things like it is, but because it is important to be within, in order to make changes."

Under a blue sky, marchers set off from Pall Mall before passing May's Downing Street office -- to the sound of boos -- on their way to Westminster to listen to speeches by anti-Brexit MPs including Liberal Democrat leader Vince Cable and Tory rebel Anna Soubry.

"Brexit is not a done deal, not inevitable, Brexit can be reversed," said Cable.

"The vote that took place two years ago is not for ever."

Demonstrators held placards reading "I am a European citizen", "ILoveu" and "we demand a vote on final Brexit deal."

Emily Hill, 55, told AFP she was "very much in favour of letting the people" confirm they really want Brexit.

"I think lot of the voting was a protest vote, some people genuinely are not supportive of the EU, but I don't believe it is the majority opinion in this country," she added, European flag in hand.

"It is not something you can decide on a yes no vote," he added.

Almost two-thirds of Britons believe they should have a final say on the Brexit deal, according to a poll published this week, although it is still unclear what would happen the government's deal were rejected.

Britain's Foreign Secretary Boris Johnson, who campaigned to leave the European Union, warned May against a Brexit that was "soft, yielding and seemingly infinitely long" like toilet roll.

Writing in The Sun, Johnson urged against a "bog-roll Brexit", British slang for toilet paper, and called on his boss to "fulfil the mandate of the people and deliver a full British Brexit".

May's team is about to enter into the next round of negotiations with EU counterparts, but is still to define exactly what it wants from Britain's future relationship with the continent, particularly in the area of customs regulation.

Trade minister Liam Fox, an arch eurosceptic, insisted that the prime minister was still prepared to walk away from the talks if no satisfactory deal was reached.

"The prime minister has always said no deal is better than a bad deal," Fox told the BBC in an interview aired on Saturday.

"It is essential as we enter the next phase of the negotiations that the EU understands that and believes it... I think our negotiating partners would not be wise if they thought our PM was bluffing."

Johnson, who was the most prominent face in the campaign to leave the EU, wrote that the British people "just want us to get on with it".

"They don't want a half-hearted Brexit," he wrote.

"They don't want some sort of hopeless compromise, some perpetual push me-pull you arrangement in which we stay half-in and half-out in a political no man's land.

"Two years ago the people of this country recorded a verdict about themselves -- that they had the guts to believe in Britain. They were right and will be proved right in the decades ahead," he added.

However, aviation giant Airbus warned on Friday it could pull out of Britain if it leaves the EU without a deal, while carmaker BMW also warned that uncertainty was affecting the investment climate.

The march against Brexit is part of a "summer of action" planned by campaign groups to put pressure on political leaders to hold a vote on the final deal.