Tens of thousands of Sri Lankans marched Monday in support of a new government led by the country's former strongman, highlighting the political polarization in the Indian Ocean island nation.

The rally near Parliament came amid a constitutional crisis sparked by President Maithripala Sirisena's move to oust Prime Minister Ranil Wickremesinghe, replace him with ex-leader Mahinda Rajapaksa and suspend Parliament. 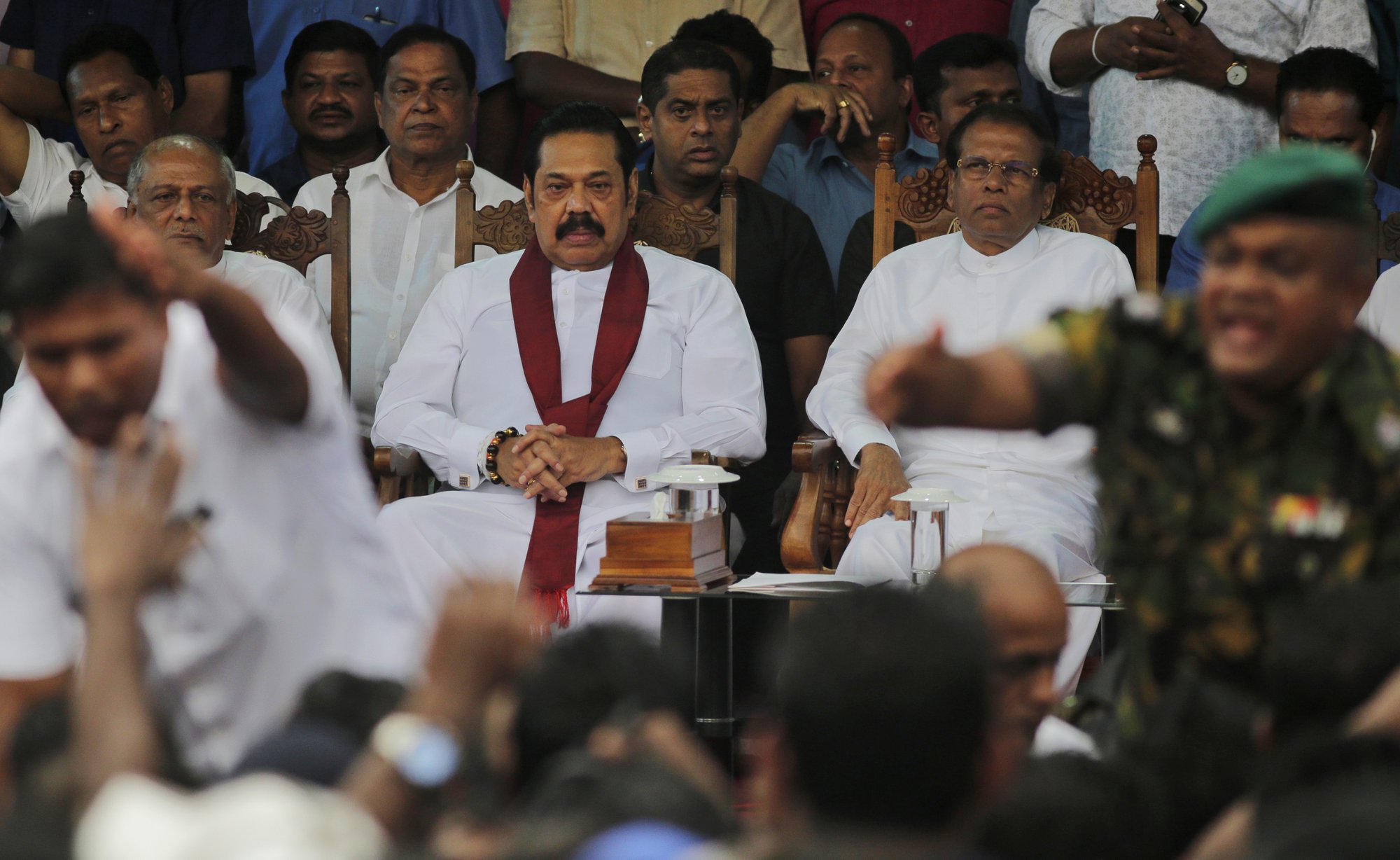 Wickremesinghe has refused to vacate his official residence, insisting he is the lawful prime minister and that the president had no constitutional right to replace him. Thousands of his supporters have been keeping vigil.

Supporters of Rajapaksa at the rally chanted "Whose power is this? Mahinda's power!"

Police estimated 120,000 people attended the rally. State television reported there were at least 200,000.

Pradeep Kariyawasam, the head of Rajapaksa's party in Colombo, said that although Wickremesinghe continues to maintain he is the country's legitimate leader, "the people are with us."

"Give people a chance to choose their government and not hide behind constitutional interpretations," he said.

Sirisena and Rajapaksa arrived at the rally amid loud cheers.

Sirisena told the crowd that the change he initiated was more than a personnel shift.

"I ousted a vision that is incompatible with our local culture and values, and that works according to foreign agendas," Sirisena said.

"For the past 3 ½ years, poor people were suppressed by Ranil Wickremesinghe's economic and political vision. Local thoughts were rejected and an extreme neo-liberal form of governance was carried out."

He was referring to Wickremesinghe's free-market economic policies and public-private partnerships with companies from China and India to operate strategic centers such as ports and airports.

"Foreign countries are trying to take our resources, take our land," said Mithra Kumara Jayasinghe, a wedding photographer at the rally who said he had voted for Rajapaksa the two times he was elected president, in 2005 and 2010, and when he lost a re-election bid in 2015.

Critics of Sirisena's actions say Parliament was suspended to give Rajapaksa time to gather enough support to survive a no-confidence vote when lawmakers reconvene Nov. 14.

Parliament Speaker Karu Jayasuriya said on Monday that he won't recognize the new appointments until either side is able to prove it has a majority. It means that the speaker still recognizes a Wickremesinghe-led Parliament.

"I wish to emphasize that I am compelled to accept the status that existed previously until such time that they (the pro-Wickremesinghe lawmakers) and the new political alliance prove their majority in Parliament," he said.

The statement was fuel at Rajapaksa's five-hour rally. Lawmaker Susil Premjayantha told the crowd that electing a new speaker could be the first order of business when Parliament reopens, suggesting the party will bring a no-confidence motion against Jayasuriya.

Wickremesinghe said in an interview with The Associated Press last week that there is credible evidence that Rajapaksa's party is attempting to buy support in Parliament. Palitha Range Bandara, a United National Party lawmaker, has said that he was offered millions of dollars and a minister portfolio if he crossed over.

Lawmakers from Rajapaksa's party have denied the allegations.

On Saturday, the Tamil National Alliance — an ethnic minority Tamil party — said it will support a no-confidence motion to be brought against Rajapaksa, after one lawmaker from their party joined Rajapaksa's government.

The Tamil party's 15 votes could give Wickremesinghe's camp a decisive edge over Rajapaksa.

Both Sirisena and Rajapaksa attempted to woo Tamil lawmakers in their speeches at the rally.

Speaking in the Tamil language, Rajapaksa promised to fulfill the Tamil people's needs.

"What I ask from all Tamil and (Tamil-speaking) Muslim people and their political parties is to help to build up our country. I trust you and you can always trust me," Rajapaksa said.

Ethnic minority Tamils in the country's north and east are still reeling from the effects of a 26-year civil war between Tamil Tiger separatists and government troops.

Rajapaksa is seen as a hero by the ethnic Sinhalese majority for winning the conflict.

Tens of thousands of civilians were reportedly killed in the final months of the war in 2009, when government troops brutally crushed the rebels. Thousands more are still missing.

Sirisena came into power in 2015 promising to address the issues affecting the Tamils and investigate allegations of war crimes against both sides of the conflict, but has done little in either area. He was also critical of investigations into military personnel accused of human rights violations during the civil war.

Among the crowd Monday was Basil Ros, 58, a fisherman from the village of Negombo.

Ros said a local lawmaker from Rajapaksa's United People's Freedom Alliance bused him and his wife in with many others, pledging to give them 1,000 rupees (about $5.80), food and alcohol.

He said he hadn't received any money yet.

After sacking Wickremesinghe, Sirisena announced that he made the replacement in part because Wickremesinghe and a Cabinet colleague were behind an alleged assassination plot against him.

Details of the alleged plot have not been disclosed and Wickremesinghe has repeatedly denied the accusation.

Tensions had been building between Sirisena and Wickremesinghe for some time, as the president did not approve of economic reforms introduced by the prime minister.

Sirisena said at the rally that he would not be discouraged by resistance in Parliament, civil society and the international community to his actions.

"Even if there are threats, pressure and forces, I will only move forward and will not take a step back," he said.