WORLD Tens of thousands of anti-Trump marchers gather in London

Tens of thousands of anti-Trump marchers gather in London 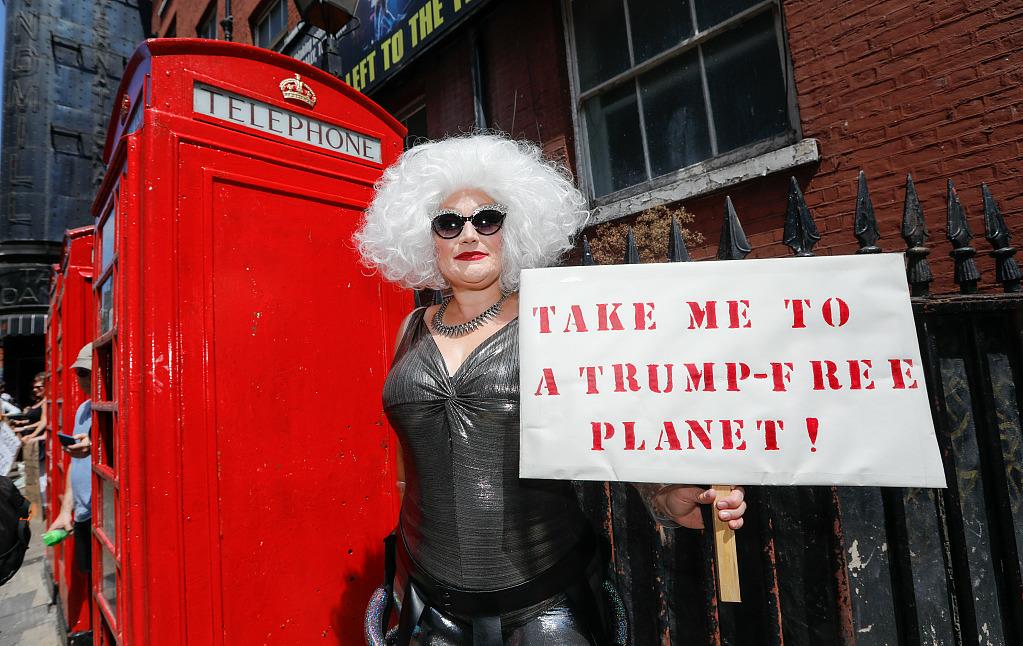 A demonstrator holds a sign saying 'Take me to a Trump-free planet!' during a protest against US President Donald Trump in London, UK, on Friday, July 13, 2018. (Photo: VCG)

Tens of thousands of people gathered in central London Friday to protest about US President Donald Trump's visit to Britain.

The Metropolitan Police have closed off a large area of London to traffic and a huge security operation swung into place over fears that terrorists may take the opportunity to strike.

Anti-Trump protests were taking place in other towns and cities, but the focal point for the demonstrations was in London.

Zoe Gardner, one of the organizing members of the Stop Trump Coalition, said demonstrations were taking place in 50 cities across Britain.

"Our message in one sentence would be Go home, Trump. You are not wanted here, nor your brand of politics," she said.

Trump was 66 km away in Buckinghamshire at the country retreat of Prime Minister Theresa May as the build-up of protesters continued in London.

Ahead of the protests a ring of steel was erected around the Houses of Parliament, with nearby Trafalgar Square the intended destination for a rally following a march through city streets.

Many carried banners with messages such as "Trump not welcome".

Jeremy Corbyn, leader of the main opposition Labour Party Friday criticized May for rewarding Trump with a red carpet welcome to Britain.

He said: "Theresa May has invited President Trump to our country at a time when his dangerous and inhumane policies are putting the lives and well-being of millions of people at risk."

The US embassy in London urged American citizens in London to exercise caution, warning that the protests could turn violent.

Issuing a "demonstration alert" the embassy told people to be aware of their surroundings, exercise caution among large gatherings in case of violence and keep a low profile.

Away from the protests and the talks at Chequers, First Lady Melania Trump visited the Royal Hospital in Chelsea where she was due to meet a group of the famous Chelsea pensioners as well as local school children. She was escorted on the visit by Philip May, husband of the Prime Minister.