Tens of thousands of Romanians brave snow for corruption protest 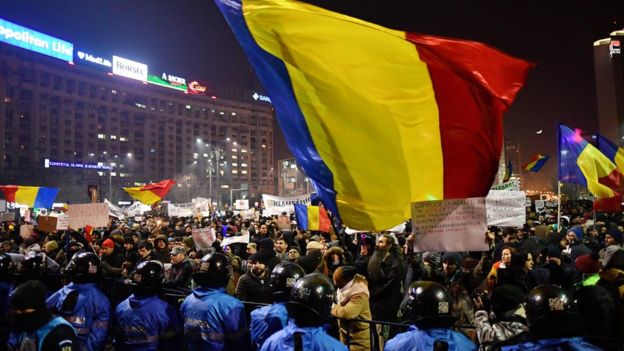 Tens of thousands of Romanians marched through heavy snow in Bucharest on Saturday in protest against corruption and attempts by the ruling Social Democrats to weaken judicial independence.

An estimated 50,000 people marched toward parliament from the iconic University Square, blowing whistles, waving flags and chanting “Thieves!”, while thousands more demonstrated in cities across Romania.

The Social Democrats (PSD) and their junior coalition partner ALDE used their majority to push a judicial overhaul through parliament in December, despite criticism from the European Commission, the U.S. State Department, thousands of magistrates and centrist President Klaus Iohannis.

Critics say the bills would weaken judicial independence and they have been challenged in the Constitutional Court where they await a ruling.

“I came out today because I have two little boys and they deserve a better life in this European country,” said Florentina Caval, 34. “I honestly don’t think we will manage to overturn the judicial bills, but we need to try.”

Lawmakers will also debate a new set of proposals to change the criminal code - including decriminalising some offences and lowering prison sentences - when parliament reconvenes in February.

An earlier PSD attempt to decriminalize several corruption offences at the start of 2017 triggered Romania’s largest street protests since the 1989 fall of Communism.

“This is a last-ditch attempt before leaving the country. The year 2018 will be decisive,” a 34-year-old real estate entrepreneur who traveled from the Transylvanian city of Sibiu to the capital of Bucharest said.

Later this month, the ruling coalition is expected to give its third prime minister in a year a vote of confidence following the resignation of former premier Mihai Tudose after falling out with powerful party leader Liviu Dragnea.

Prime Minister designate Viorica Dancila’s cabinet will mostly be judged at home and by investors on whether it will hamper or facilitate the European Union state’s struggle to stamp out high-level corruption.

Transparency International ranks Romania among the EU’s most corrupt states, although Brussels, which has Romania’s justice system under special monitoring, has praised magistrates for their efforts to curb graft.

Romania’s anti-corruption prosecutors have sent 72 members of parliament for trial since 2006. The speakers of parliament’s lower house and senate are on trial in separate cases.