Tens of thousands rally in France to honor beheaded teacher 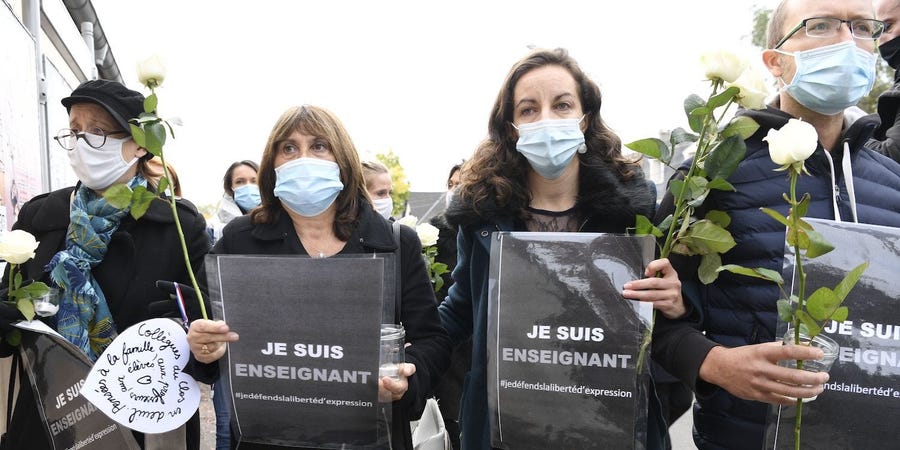 People hold a sign reading 'I am a teacher - Freedom of speech' in front of a middle school in Conflans-Sainte-Honorine, 30kms northwest of Paris, on October 17, 2020. (Photo: AFP)

Tens of thousands of French people joined in marches throughout the country on Sunday to pay tribute to Samuel Paty, a teacher who was decapitated in a terrorist attack two days ago.

In an exceptional way, a ban on gatherings of more than 10 people in public spaces due to the pandemic situation was lifted to allow people to attend Sunday's commemoration and show their solidarity.

Prime Minister Jean Castex headed the rally in Paris to say "Stop to barbarism" as read in many banners. Government officials, politicians from the country's political spectrum, teachers' unions and citizens joined the march.

On Friday afternoon, the 47-year-old history teacher was found decapitated in the street near a middle school in Conflans-Sainte-Honorine, northwest Paris. He had reportedly shown in his class, as part of a discussion on freedom of expression, cartoons of Prophet Muhammad.

The attacker, who was shot dead by police as he refused to surrender, was an 18-year-old refugee of Chechen origin and not previously known to the intelligence services.

Police have detained 11 individuals as part of a probe into the "assassination in relation to a terrorist undertaking" and "terrorist criminal association," local media reported.

"The Republic was attacked because a teacher was assassinated. So whatever our political, union or other differences, we must show unity and that we are not afraid in the face of the enemies of the Republic," Minister of National Education Jean Michel Blanquer told reporters in Paris rally.

"We will succeed in fighting the enemies of democracy, we will succeed if we are united," he added, pledging more acts to "prevent such tragedies from taking place."

A national tribute will be scheduled for Wednesday.