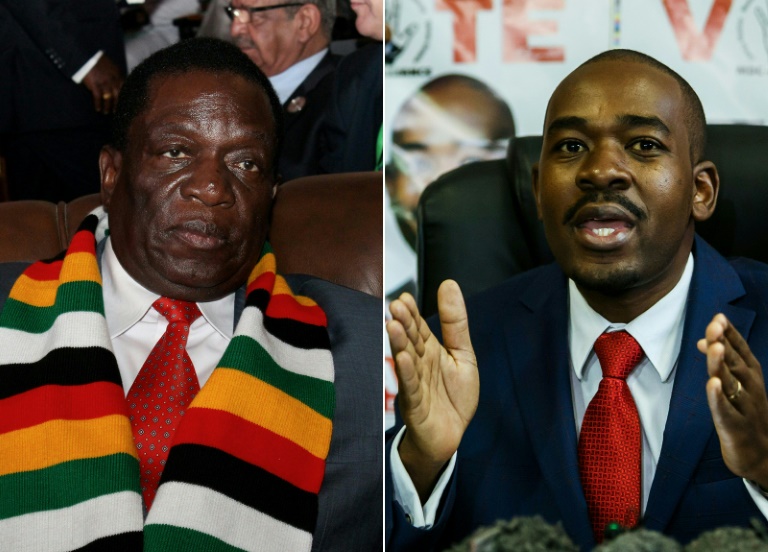 Zimbabwe's opposition MDC party on Tuesday claimed victory in the country's historic elections, setting the scene for a showdown with the ruling ZANU-PF that has held power since independence in 1980.

Senior MDC official Tendai Biti said party leader Nelson Chamisa had won the presidential race, and alleged that the authorities were delaying the publication of results.

"The results show beyond reasonable doubt that we have won the election and that the next president of Zimbabwe is Nelson Chamisa," Biti told a press conference at the party's headquarters in Harare.

"We are however seriously concerned about evidence of interference... there is a deliberate delay in announcing the results. This delay is totally unacceptable."

President Emmerson Mnangagwa, 75, has also said he was confident of victory in Zimbabwe's first election since former leader Robert Mugabe was ousted in November after 37 years in power.

"The information from our reps on the ground is extremely positive! Waiting patiently for official results as per the constitution," Mnangagwa said on Twitter early Tuesday.

The rival claims pointed to a contested result, raising the prospect of competing fraud allegations and a possible run-off vote in September -- required if no candidate wins at least 50 percent of ballots in the first round.

Analysts have said it was unclear whether the country's generals, who ousted Mugabe and ushered Mnangagwa into office, would accept a win by the Movement for Democratic Change (MDC).

Defeat for the ruling party would likely lead "to a denunciation of the election by the Mnangagwa administration and the potential for the military to intervene to secure power for ZANU-PF," the London-based BMI risk consultancy said.

"I am scared -- is there going to be unrest?" Stone Sibanda, a 39-year-old taxi driver in Harare, told AFP. "It is a very sensitive moment. Everyone is anxious."

Estimated turnout was around 75 percent before polls closed on Monday evening after a peaceful day of voting.

Early results from the elections -- presidential, parliamentary and local -- are expected Tuesday, and full results are due by Saturday.

At one polling station in the capital Harare, officials counted large piles of ballots using gas lanterns and candles late into the night on Monday.

If required, Zimbabwe's 5.6 million registered voters would be asked to return to the polls to vote in a presidential run-off on September 8.

Zimbabwe's much-criticised election authority declared Tuesday that the vote had been free of rigging -- even though the count was not yet completed.

"We are absolutely confident there was no rigging... we at the Zimbabwean Election Commission will not steal (the people's) choice of leaders, we will not subvert their will," said ZEC chair Priscilla Chigumba.

Mugabe, 94, whose authoritarian regime held power through violent, fraud-riddled elections, voted in Harare alongside his wife Grace after a surprise press conference at his home on Sunday at which he called for voters to reject ZANU-PF, his former party.

"There are shortcomings that we have to check. We don't know yet whether it was a pattern," EU chief observer Elmar Brok told AFP on Monday.

The bloc will deliver a preliminary report on the conduct of the election on Wednesday, as will the Southern African Development Community (SADC) and the African Union teams.

But Chamisa, 40, a lawyer and pastor who performed strongly on the campaign trail, sought to tap into the youth and urban vote.

He has repeatedly accused ZANU-PF and election authorities of trying to fix the result via a flawed electoral roll, ballot paper malpractice and voter intimidation.

The new government must tackle mass unemployment and an economy shattered by the seizure of white-owned farms under Mugabe, the collapse of agriculture, hyperinflation and an investment exodus.

Previously solid health and education services are in ruins, and millions have fled abroad to seek work.

Both candidates had vowed to clean up government and attract foreign investment to create jobs after the isolation and systematic corruption of the Mugabe era.

In 2008, then opposition leader Morgan Tsvangirai pulled out of the presidential run-off against Mugabe after attacks orchestrated by the state claimed the lives of at least 200 of his supporters.