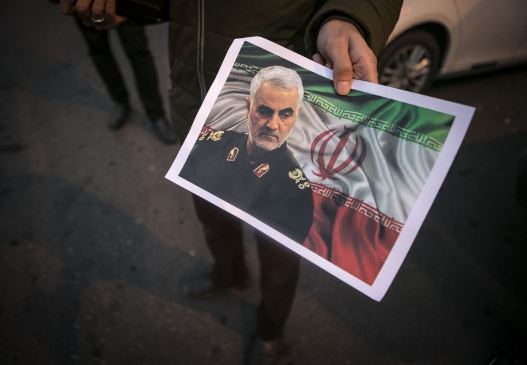 A man distributes a poster of high-profile Iranian commander Qassem Soleimani during a protest in Tehran, Iran, on Jan. 3, 2020. (Photo: Xinhua)

CAIRO/BAGHDAD, Jan. 4 (Xinhua) -- The world is holding its breath to see what could happen next, as the US killing of an Iranian commander has heightened tensions between the two rivals and casted a long shadow over the Middle East region.

The United States killed Qassem Soleimani, a high-profile commander of the Quds Force of Iranian Islamic Revolution Guards Corps, with an airstrike near Baghdad's international airport on Friday morning, sparking outrage in Tehran with Iranian officials pledging to retaliate.

The move was the culmination of tensions between the two countries since 2018, when US President Donald Trump pulled out of the Iran nuclear deal and reimposed sanctions against Iran.

As the risk of further violence between the United States and Iran looms large, the international community is calling for utmost restraint to avoid further escalation of tensions in the Gulf.

UN Secretary-General Antonio Guterres on Friday called for exercising "maximum restraint" by all related parties, saying the world cannot afford "another war in the Gulf."

During a phone call with Iranian Foreign Minister Mohammad Javad Zarif on Saturday, Chinese State Councilor and Foreign Minister Wang Yi voiced China's opposition to the use of force in international relations, saying military means only lead to a dead end and maximum pressure will get nowhere. 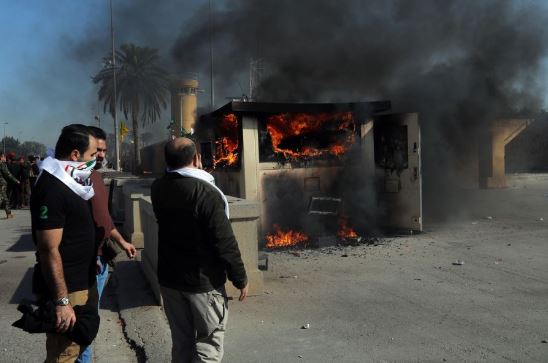 The US strike came after Iraqi protestors stormed the US embassy in Baghdad on Tuesday in response to earlier US air raids on Kata'ib Hezbollah, a pro-Iran militia, which killed dozens of its fighters.

The US Defense Department said it conducted the attack under Trump's direction as a "defensive action" against Soleimani, who it said was planning further attacks on US diplomats and service members in Iraq.

Experts said besides revenge, the United States killed Soleimani in order to consolidate its hegemonic position in the Middle East while undermining Iran's regional influence.

"Iran considers Iraq, especially the Iraqi Shia militias, as an important tool to counter the United States, so the US action meant to force Iran to loosen its grip on Iraq," said Tang Zhichao, a researcher with the Institute of West Asian and African Studies at the Chinese Academy of Social Sciences.

"The killing of Soleimani was a big blow to Iran's overseas military capacity," said Ding Long, professor with the University of International Business and Economics in Beijing, adding that the Quds Force is responsible for extraterritorial operations of Iran's Islamic Revolution Guards Corps.

By taking the action, Washington showed to the world that it will not pull back from the Middle East, and is both determined and capable to confront challenges from Iran, said Wu Bingbing, head of Arabic and Islamic Cultural Studies Institute of Peking University.

Iranian senior officials on Friday strongly condemned the assassination of Soleimani. Iran's Supreme Leader Ayatollah Ali Khamenei said in a statement that those who assassinated Soleimani should expect a severe response from Iran.

Many worry that the heightened Iran-US tensions could spill over and ignite a wider conflict that may engulf the entire Middle East.

"A strike that the administration claims was intended to deter Iranian attacks is almost certain to trigger far more of them," he tweeted.

"There is a possibility that the US-Iranian struggle could spread to cover more areas in the region," said Sabah al-Sheikh, a professor of politics with Baghdad University.

Najib al-Jubouri, a lecturer with Baghdad University, said the strike has diverted the US-Iranian conflict from behind the scenes by Iran's proxy militias to direct confrontation. "The new position reduced maneuverability on each side, increasing the risk of the confrontation spinning out of control," he said.

Tang predicts that "Iran will not abandon the Shia militias in Iraq and will possibly create more challenges against the United States within Iraq."

Markets were also flung into a risk-off mood amid the fear of escalating tensions in the Middle East, with oil prices surging and stock markets falling.

While denouncing the US act as a violation of Iraq's sovereignty, many countries called for restraint of all relevant parties.

During Saturday's phone call with Zarif, Wang said China will play a constructive role in maintaining peace and security in the Middle East and the Gulf region while remaining objective and fair.

The dangerous US military actions violated the basic norms of international relations and would aggravate regional tensions, Wang said, adding that China urges the United States not to abuse force and calls for dialogue to seek solutions to problems.

"Further escalation, which could set the whole region on fire, must be prevented," said German Foreign Minister Heiko Maas.

Though the future remains uncertain and unnerving, many are positive about the possibility of de-escalation.

"I don't think Iran would adopt an outraged response, since both Iran and the United States are the targets of the demonstrations going on in Iraq," Ding said. "They are both under pressure from the proxy war."

Wu also believes that Iran will act with restraint as "it would shoulder great pressure and suffer losses if a full-scale confrontation is launched against the United States."

"On the other hand, Trump would not risk the 2020 election by getting involved in a long-term and large scale military action," Wu said.