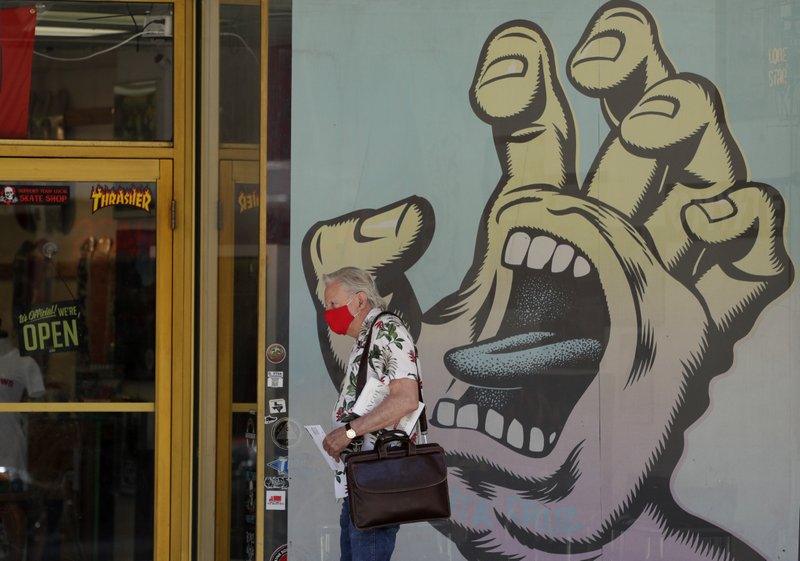 A man wearing a face mask for protection against COVID-19 passes a business that has reopened in San Antonio, Thursday, May 14, 2020. Texas attorney general Ken Paxton has warned officials in San Antonio, Austin and Dallas that the cities could face lawsuits if they do not relax coronavirus measures he says go further than state law allows. (Photo: AP)

Two weeks into the reopening of Texas, coronavirus cases are climbing. New outbreaks still crop up. And at Guero’s Taco Bar in Austin, which offers the occasional celebrity sighting, a log of every diner and where they sat is begrudgingly in the works.

“It seems like a huge invasion of privacy,” said owner Cathy Lipincott, who is nonetheless trying to comply with Austin’s local public health guidelines by asking, but not requiring, customers to give their information.

Few states are rebooting quicker than Texas, where stay-at-home orders expired May 1. With cases still rising, including single-day highs of 1,458 new cases and 58 deaths Thursday, Republican Gov. Greg Abbott has defended the pace by emphasizing that hospitalization and infection rates are steady, and pointing out that Texas’ 1,200 deaths still lag similarly big states, including California and Florida.

But on the cusp of even more restrictions ending Monday, including gyms being cleared to reopen, a political confrontation is growing over attempts by big cities to keep some guardrails in place. The dispute underscores the gulf between Democrats who run city halls and GOP leaders who call the shots in the capital in Texas, one of a number of states where local officials and governors have clashed over restrictions during the pandemic.

The renewed tensions come at a moment when Dr. Anthony Fauci, the nation’s top infectious disease expert, warned Congress this week of “needless suffering and death” if the U.S. moves too quickly. Nevertheless, Wisconsin’s courts tossed out the state’s stay-at-home orders, throwing communities into chaos as some bars opened immediately while strict local restrictions were kept elsewhere.

In Georgia, Atlanta Mayor Keisha Lance Bottoms has also expressed unease at the speed that Republican Gov. Brian Kemp has reopened the state. Oklahoma lawmakers, irritated by local officials who imposed stricter measures during this health crisis, passed a House bill Thursday that would weaken the power of cities during the next one.

And in Texas, Republican Attorney General Ken Paxton this week lashed out at the cities of Dallas, Austin and San Antonio over what he called “unlawful” local orders that are tougher than restrictions prescribed by Abbott, and threatened lawsuits if the cities don’t back off. The warning came one day after El Paso pleaded to postpone easing up on any more lockdown measures in light of the number of COVID-19 cases there surging 60% over the past two weeks.

“Unfortunately, a few Texas counties and cities seem to have confused recommendations with requirements and have grossly exceeded state law to impose their own will on private citizens and businesses,” Paxton said.

City leaders said their local orders, which include more stringent emphasis on face coverings in public and restaurant protocols that aren’t strictly enforced, don’t conflict. El Paso County Judge Ricardo Samaniego, the county’s top elected official, said he made his case to the governor during a phone call and asked for a few more weeks to assess data and reduce cases before more restrictions are lifted. But he doesn’t think he’ll get an answer before Abbott’s public announcement Monday.

“I’m not fighting his plan, I’m fighting his timing,” Samaniego said. “It looks like it would work for us months from now.”

The spat is a reversal from the early days of the outbreak in Texas, when Abbott gave cities and counties wide latitude to issue restrictions as they saw fit. But Abbott has since taken the reins over how quickly Texas will reboot, which last week included moving up the reopening of hair salons following complaints from conservatives. Testing for most of May has fallen well short of Abbott’s stated goal of 30,000 per day, although testing numbers have surged in recent days, according to state health officials.

Overflow hospitals set up in Dallas and Houston were dismantled without ever being used, and the rate of new cases in Texas has dropped since April even as testing has expanded, down to a seven-day average of 5.3% as of Thursday, according to data from Abbott’s office. But experts still worry.

“They see the decline going in and they pat themselves on the back and say, ‘Look at the good work we’ve done, now we can let this happen and open up things,’” said Dennis Perrotta, a retired state epidemiologist in Texas. “And then we get slammed with a second peak.”

In Austin, restaurants have grumbled over recommendations to log dine-in customers for the purposes of contact tracing, coupled with a warning that health officials otherwise might have to publicly out eateries if outbreaks spread. Some restaurateurs saw that as a threat, but at The Peached Tortilla, owner Eric Silverstein says his industry has to do what it takes to reopen.

“We have no choice,” he said. “You kind of have to going back to doing some form of business.”

A few blocks away at Brentwood Social House, a neighborhood coffee shop, owner Suzanne Daniels isn’t so sure. Though her competitors have reopened, her indoor seating remains closed, and she doesn’t know when she’ll feel safe to follow them.

“It feels early,” Daniels said. “In my gut, it doesn’t feel right or good.”