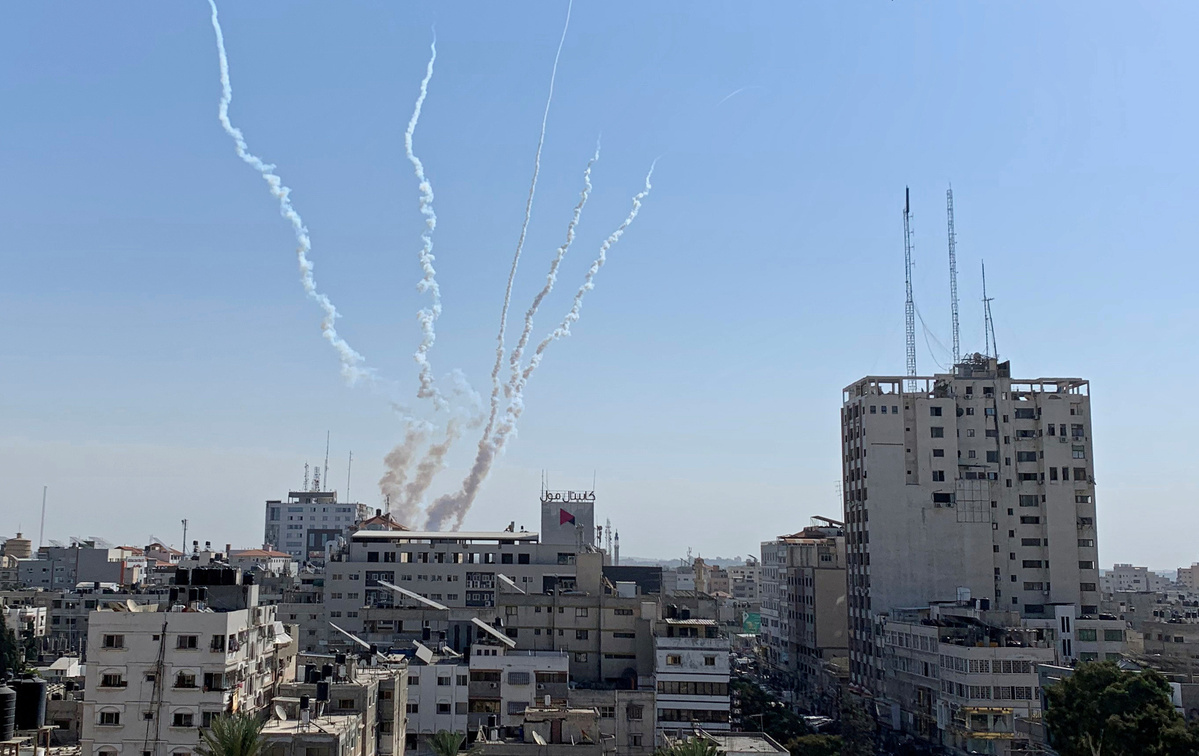 Trails of smoke are seen as rockets are fired from Gaza towards Israel, in Gaza, on Nov 14, 2019. (Photo: China Daily)

Israel and the militant Islamic Jihad group in Gaza appeared to have reached a cease-fire on Thursday to end two days of heavy fighting that killed at least 34 Palestinians and paralyzed parts of Israel.

Islamic Jihad group spokesman Musab al-Berim said the Egyptian-brokered deal went into effect at 5:30 am. There was no immediate confirmation from Israel, which rarely acknowledges deals with Gaza militant groups, but some restrictions were lifted on residents of the south, despite the continued firing of several rockets.

Berim said the cease-fire was based on a list of demands presented by his group late on Wednesday, including a halt to Israeli targeted killings of the group's leaders. The fighting broke out early on Tuesday after Israel killed a senior commander of the militant group who was said to be behind a string of the rocket attacks.

The rare targeted killing by Israel sparked the heaviest fighting with Gaza militants since May. Islamic Jihad fired nearly 400 rockets toward Israel, while Israel responded with scores of airstrikes.

Israeli Foreign Minister Israel Katz said the policy of targeted killings had "proved itself" to be effective and that it would continue, despite word of the cease-fire.

"Everyone who was a top military official, who was set to carry out and was involved in terror or rocket firing against Israel was eliminated," he told Israeli Army Radio. "And we intend to continue with this."

Gaza's ruling Hamas militant group, which is much larger and more powerful than Islamic Jihad, stayed out of the fighting, indicating it would be brief.

Palestinian officials reported 34 deaths, including those of a 7-year-old boy and six members of a single family. At least 16 of the dead were militants.

The rocket fire crippled life across southern Israel and, on Tuesday, also in the country's heartland in and around Tel Aviv, as nonstop airraid sirens canceled school classes and forced people to remain indoors. At least three people were lightly wounded from shrapnel or shattered glass. Most rockets landed in open areas or were shot down by Israel's Iron Dome military defense system.

Much of Gaza resembled a ghost-town, with almost no vehicles on the roads except for ambulances evacuating the wounded.

Shortly after Berim's announcement, at least two rockets were fired from Gaza, setting off sirens in southern Israel. It was not immediately clear who fired the rockets or whether the launches were intentional or misfires caused by electronic timers.

But Islamic Jihad said it was committed to ending the fighting, saying the fire was likely because word hadn't spread to all members about the halt to violence.

While Israel didn't publicly confirm the deal, UN and Islamic Jihad officials were in touch on Wednesday with Egyptian mediators. The Egyptians typically broker deals to end fighting in Gaza, and Israel did not respond to the rocket launches.

Also, the Israeli military's Home Front command tweeted that it was lifting restrictions in certain areas but leaving them in place in the areas surrounding Gaza. In Gaza, cars could be heard back on the streets as the territory appeared to be springing back to life. Israeli military drones could still be heard buzzing overhead.

Late on Wednesday, Islamic Jihad's leader, Ziad al-Nakhalah, announced three conditions for an end to the fighting. Aside from an end to targeted killings, the group demanded a halt to Israeli shootings of protesters at weekly demonstrations along the Israeli border and the easing of a 12-year-old Israeli blockade that has devastated Gaza's economy.