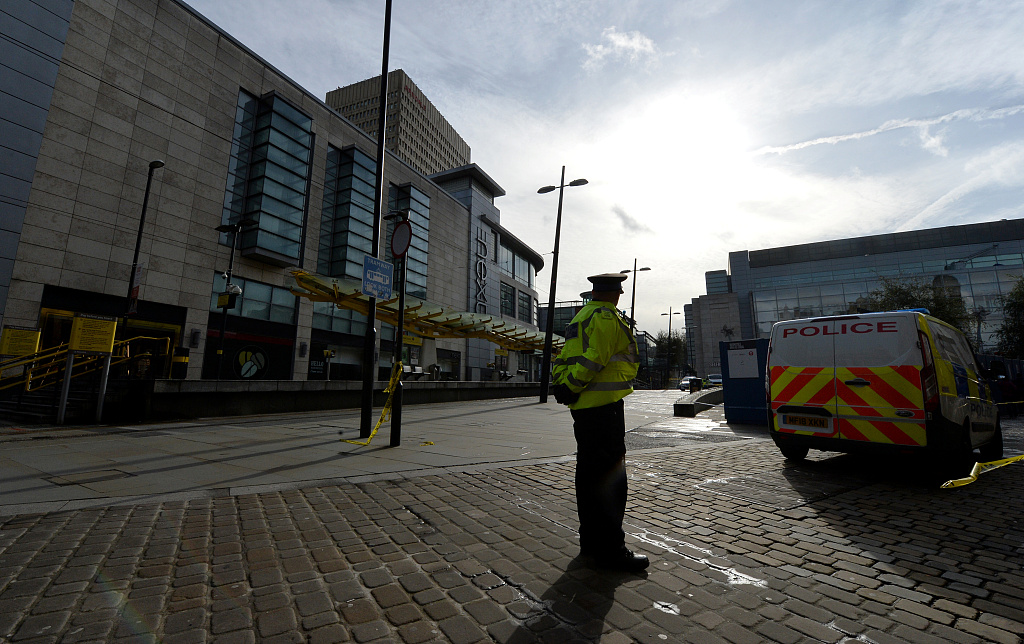 A police officer is seen outside the Arndale shopping centre after several people were stabbed in Manchester, Britain October 11, 2019. (Photo: VCG)

Counter-terror police were on Friday probing a mass stabbing at a shopping centre in northwest England that left several people injured and needing hospital treatment.

The attack happened at the Arndale shopping centre in the heart of Manchester, where an Islamist extremist suicide bomber killed 22 after an Ariana Grande concert in 2017.

A man in his 40s was arrested on suspicion of serious assault.

Footage posted online appeared to show one police officer restraining the suspect on the floor as another stands over him pointing a Taser.

A shop worker who gave his name only as Jordan, 23, told Britain's domestic Press Association news agency that "a man was running around with a knife lunging at multiple people, one of which came into my store visibly shaken with a small graze".

Two women -- one of them aged 19 -- were taken to hospital with stab wounds and were said to be in a stable condition following the attack, which happened shortly after 11:00 am (1000 GMT).

A man in his 50s was also being treated while the fourth victim, a woman in her 40s, did not require treatment, police said.

More details were expected at a news conference later on Friday afternoon.

Earlier, the force said: "Given the location of the incident and its nature, officers from Counter Terrorism Police North West are leading the investigation as we determine the circumstances."

Officers were "keeping an open mind about the motivation", the force said.

Prime Minister Boris Johnson said he was "shocked by the incident in Manchester and my thoughts are with the injured and all those affected".

Among the pictures circulating on social media was one of paramedics screening off a cafe to treat victims after the shopping centre was evacuated.

Freddie Houlder, 22, said he was in the centre when he heard "a load of screams" before a woman told him she was nearly stabbed.

"Luckily she had quite a thick jacket -- she thought originally it was a fake knife because of how easily it grazed off but police came in and said it was a real knife and she burst into tears," he said.

"I definitely don't think it was gang violence because this guy was going around trying to stab random people, I believe."

The Arndale Centre had already been the scene of a terror attack in 1996 when the largest peacetime bomb ever detonated in Britain injured 212.

He was later detained under mental health legislation.

The Arndale Centre is near the Manchester Arena, where the Ariana Grande concert attack happened, and the railway station.