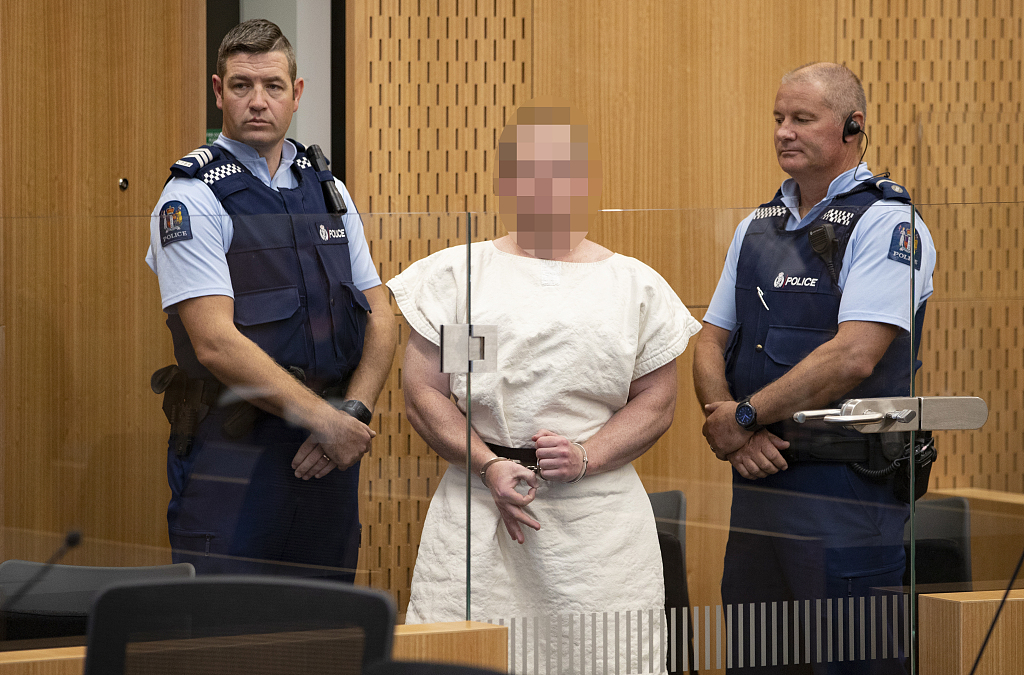 The man charged in relation to the Christchurch massacre, Brenton Tarrant, gestures as he is lead into the dock for his appearance for murder in the Christchurch District Court on March 16, 2019 in Christchurch, New Zealand. (Photo: VCG)

The attacks in two mosques in central Christchurch killed at least 49 people and injured 48 others.

Brenton Tarrant, in white prison suit, barefooted, handcuffed and flanked by two armed police officers, made a brief appearance in the court for about five minutes.

Tarrant, who was not granted name suppression, smirked to the camera of the media dock and frequently scanned the court room which was closed to the public.

The charging document showed the maximum penalty will be life imprisonment. He will be in custody until April 5, according to the High Court in Christchurch.

Tarrant's occupation was not given on the charging document, and his address was provided as a place in Dunedin, more than 300 km south of Christchurch in New Zealand's South Island.

The judge briefed the media before the hearing, saying videos and photographs were only released by approved New Zealand media outlets including TVNZ and RNZ.

International media were packed outside the court before the hearing, along with heavily armed police and security staff.

Meanwhile, outside the court, major roads in the city center are cordoned off with heavy armed police officers on duty. Vehicles are prohibited, but people can walk closer to the mosques where the shooting happened on Friday.

From time to time people outside the cordon came to place flowers under a tree to express their condolences to the victims.

A disabled man on crutches, accompanied by a lady with flowers in her hands, was also seen come to the spot. Several women sobbed silently.

Four New Zealand women hugged each other outside the cordon. One of the women told Xinhua "No matter what cultural backgrounds, races or religions you are from, we are absolutely together."

Huang Yan, the manager of the Christchurch branch of China's Southern Airlines, told Xinhua the mass shooting would bring negative impact on New Zealand tourism as Christchurch has just been recovered from the aftermath of the 2011 deadly earthquake.