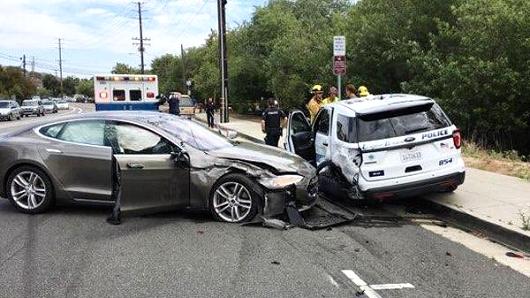 Police in a Southern California coastal town said that a Tesla in autonomous mode hit a patrol car parked on the side of a road on Tuesday.

No one was in the patrol car when the collision took place in the late morning, the Laguna Beach Police Department said in a message posted along with photos on Twitter.

"When using Autopilot, drivers are continuously reminded of their responsibility to keep their hands on the wheel and maintain control of the vehicle at all times," a Tesla spokeswoman said in response to an AFP inquiry.

"Tesla has always been clear that Autopilot doesn't make the car impervious to all accidents."

Responses to the police department Twitter post ranged from thoughtful analysis of the accident to mistrust of self-driving cars.

"For automation to learn from mistakes, their developers need to admit making them," read a comment tweeted from the account of @SafeSelfDrive.

Tesla chief Elon Musk complained in a recent earnings call that accidents involving self-driving cars get sensational headlines while the potential for the technology to save lives is downplayed or ignored.

Whether an Autopilot feature was engaged when a Model S collided with the rear of a stopped fire truck in the US state of Utah on May 11 remained to be confirmed.

According to local media, police said the woman at the wheel of the car claimed it was in a self-driving mode and that her attention was on her phone.

"It's super messed up that a Tesla crash resulting in a broken ankle is front page news and the (approximately) 40,000 people who died in US auto accidents alone in past year get almost no coverage," Musk said in a tweet in mid-May.

"What's actually amazing about this accident is that a Model S hit a fire truck at 60mph (96 kmh) and the driver only broke an ankle."

Among accidents to make headlines was a fiery March crash in California that involved its "Autopilot" feature.

The US National Transportation Safety Board is investigating the accident, which led to the death of a 38-year-old father of two, Walter Huang.

Huang's hands were "not detected on the wheel for six seconds prior to the collision," Tesla said in a blog post.

Uber put a temporary halt to its self-driving car program in the US after a March accident in Arizona that resulted in the death of woman pushing a bicycle in a street.(AFP)