How does the US, the most powerful country on earth, keep failing so astonishingly to respond to natural disasters? That question is on the minds of many in China and beyond, as they watched in disbelief a severe winter storm sweeping through parts of the US, leaving over 30 people dead and several million in the dark without power.
The shock was not over the havoc the harsh weather wrought, but was sparked by how unprepared various aspects of the US system were and how the country's governing apparatus, at both the federal and local levels, responded to the natural disaster: knee-jerk fingering-pointing and partisan fights and profound ineptness and incompetence - which have already been laid bare in its failure to contain the COVID-19 pandemic.
But underneath the noisy narratives pushed by various political and other special interests, the failure was the result of a confluence of inherent problems for the country's backward power supply infrastructure, including outdated generators and transmission lines and lack of regulation and national coordination, observers and experts noted.
While the harsh weather conditions were the direct cause, those issues are long-standing and prevalent, as the US has one of the most blackouts among developed countries, they added.
Darkness
As hundreds of millions of Chinese enjoyed an unexpectedly warm and safe Chinese New Year this week despite the COVID-19, a historic winter storm hit the southern part of the US with bone-chilling temperatures, leaving at least 30 people dead as of Wednesday local time and 3 million people under blackout.
The situation was particularly dire in the oil-rich state of Texas, which has been dubbed by some as the energy capital of the world. Some living in the state described a dark, apocalyptic scene, as they struggled for over 48 hours without electricity and water - the most basic functions of a modern civilization.
Yang Yang, a 24-year-old PhD student from China who lives near the Texas Medical Center in Houston, said that he has had no electricity for two days and could not image this would happen in today's America.
"The house is increasingly turning into an icehouse," Yang told the Global Times on Thursday, adding that while he barely made through the first night with supplies, he started feeling the cold and could not even cook food without electricity and water. Yang said he was planning to go to the school and stay there as long as he can to avoid the freezing temperatures at home.
While millions like Yang are struggling to continue with their lives, all levels of government in the US have so far failed to come up with any answers other than pointing fingers and resorting to partisan fights, sparking widespread outrage.
Among the most outrageous was a comment from the mayor of Colorado City, Texas, Tim Boyd, who wrote in response to criticism that "no one owes you [and] your family anything, nor is it the local government's responsibility to support you during trying times like this… only the strong will survive and the weak will perish." Boyd has since resigned.
However, the finger-pointing and dereliction of responsibility did not stop there, far from it.
Some conservative politicians and opinion leaders were trying to blame the blackout on everything from the state's reliance on wind power and other renewable energies, to socialism.
Former Texas governor and secretary of the US Department of Energy under Trump, Rick Perry, suggested that people would go longer without electricity to stop Democrats from pushing for socialism in the state. Others like Senator Ted Cruz and environment advocates pointed the finger at each other by blaming renewable energy sources for the power outage.
However, not many are buying the political blame game, as some pointed out that many other places such as Canada, Sweden and the American Midwest that also face harsh weather conditions and have extensive wind power supplies do not seem to have the same problems.
The US is said to be the only developed country that has so many blackouts for a long period. Just last year, a power outage left more than 2 million people without power and in 2019, an outage also left Manhattan in darkness. 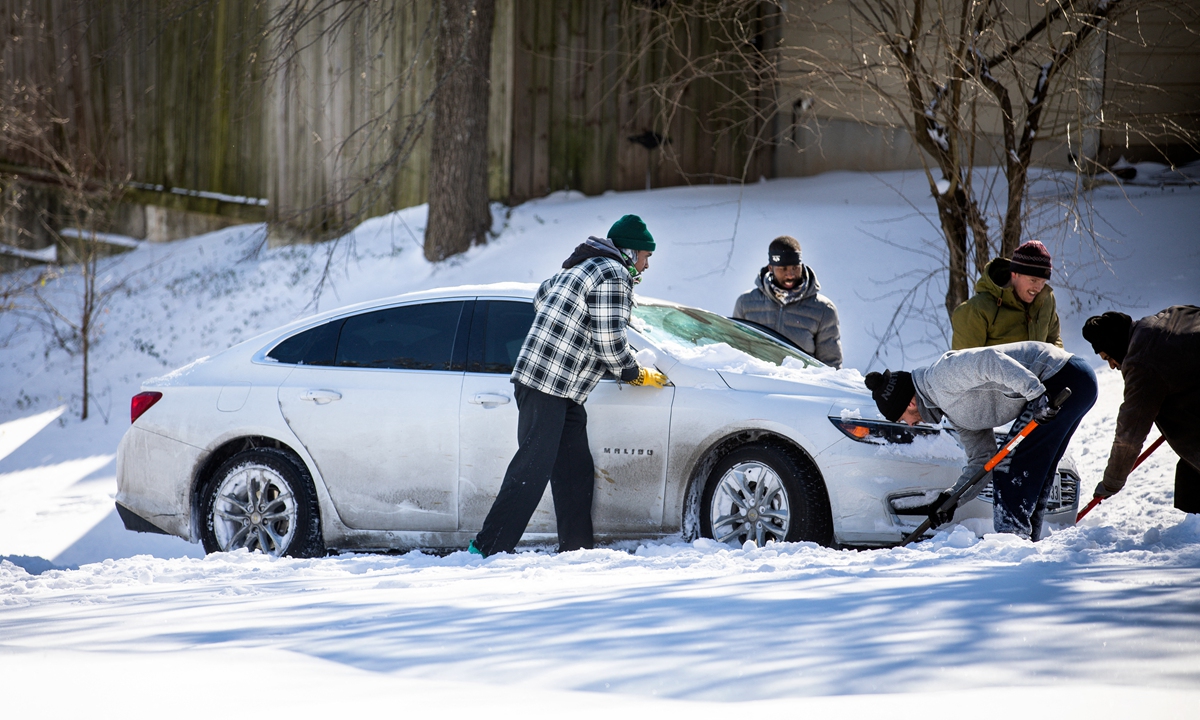 A man shovels snow from under a car stuck on a hill on February 15, 2021 in East Austin, Texas. Winter storm Uri has brought historic cold weather to Texas, causing traffic delays and power outages, and storms have swept across 26 states with a mix of freezing temperatures and precipitation. (Photo: AFP)

Deeper trouble
While weather conditions may have played a role, there is a deeper systemic trouble in the US power grid, including outdated equipment and transmission lines and profit-hunger private power firms and a failed governance system to fix those long-running problems, analysts said.
"Why does the US use the winter storm as the excuse every time?" Shu Bin, director of the State Grid Beijing Economics Research Institute, told the Global Times on Thursday, noting that the power grid system is very vulnerable and requires constant maintenance and upgrade.
A report from the US Department of Energy (DOE) in 2015 said that 70 percent of power transformers in the country were 25 years or older, 60 percent of circuit breakers were 30 years or older, and 70 percent of transmission lines are 25 years or older. And the age of these components "degrades their ability to withstand physical stresses and can result in higher failure rates," the report noted.
In comparison, China has been investing heavily on basic research and development for technology in power generation and distribution to make it smarter and safer.
For example, with the help of big data and other innovations, future grid construction will use large-scale "insulation sensors," which are like smart watches that monitor our health status, to monitor the system status, according to Shu.
Also presenting a big trouble for the US is separate power networks with no national coordination and regulation.
For example, the power system in Texas is not connected to other regional power grids, which made it impossible to redirect power distribution when the state's own system failed, experts pointed out.
"The US has no nationwide power grid network allocation plan like China. When it encounters extreme weather, a state won't help another state like some Chinese provinces and regions do with flexible allocation plans," Lin Boqiang, director of the China Center for Energy Economics Research at Xiamen University, told the Global Times on Thursday.
But the broader problem behind the repeated blackouts in the US is the ineptness and incompetence of its divisive political systems to address any crises effectively, as revealed in its failures in response to challenges like mass shootings and the COVID-19, experts said.
Despite warnings of problems in the national power grid, as indicated in the DOE report, the US government failed to come up with a fix and basically left the matter in the hands of private companies, which are after profits rather than safety, experts said.
Among about 3,000 power generator firms in the US, over 72 percent are private firms while power grids run by the urban and rural government accounted for only a small part, which are mainly involved in retail business, according to an industry analysis published on Chinese portal news sites on Wednesday.
Guided by well-coordinated national development plans with massive investments, China has built one of the largest and most advanced power grids in the world, which not only detects problems instantly but also ensures steady supply if one area has power loss, according to Shu.
"China uses 50Hz across the country, like the country has the same heartbeat," he said, adding that China has never experienced such a scale of blackouts as the US.
Hypocrisy
Still, in January, when several parts of China issued restrictions on certain power supply due to high demand amid cold temperatures and robust economic activities earlier this year, many Western media jumped on the incident to smear China's failure to provide electricity to its people and political motivations to punish Australia by banning coal imports from the latter.
But in fact no widespread blackouts were reported, as those in the US over the past several years.
That and other smear campaigns launched by Western media and politicians against China have also led many Chinese to call out the hypocrisy in the criticism from the US, which failed to protect its citizens from the COVID-19 and provide electricity in times of dire need.
"They've already said it. Only socialism does rescue. The US promotes survival of the fittest," one social media user commented on Sina Weibo on Thursday, referring to the comments by Boyd.
"Texas officials' criticism of people's grievances toward the government and leaving people to 'sink or swim' really challenged people's understanding of the US… it exposed the hypocrisy of the US and reflected the failure of the US governance system and imbalance between federal and state governments," Li Haidong, a professor at the Institute of International Relations of China Foreign Affairs University, told the Global Times on Thursday, adding that Texas was the epitome of social Darwinism and it failed.