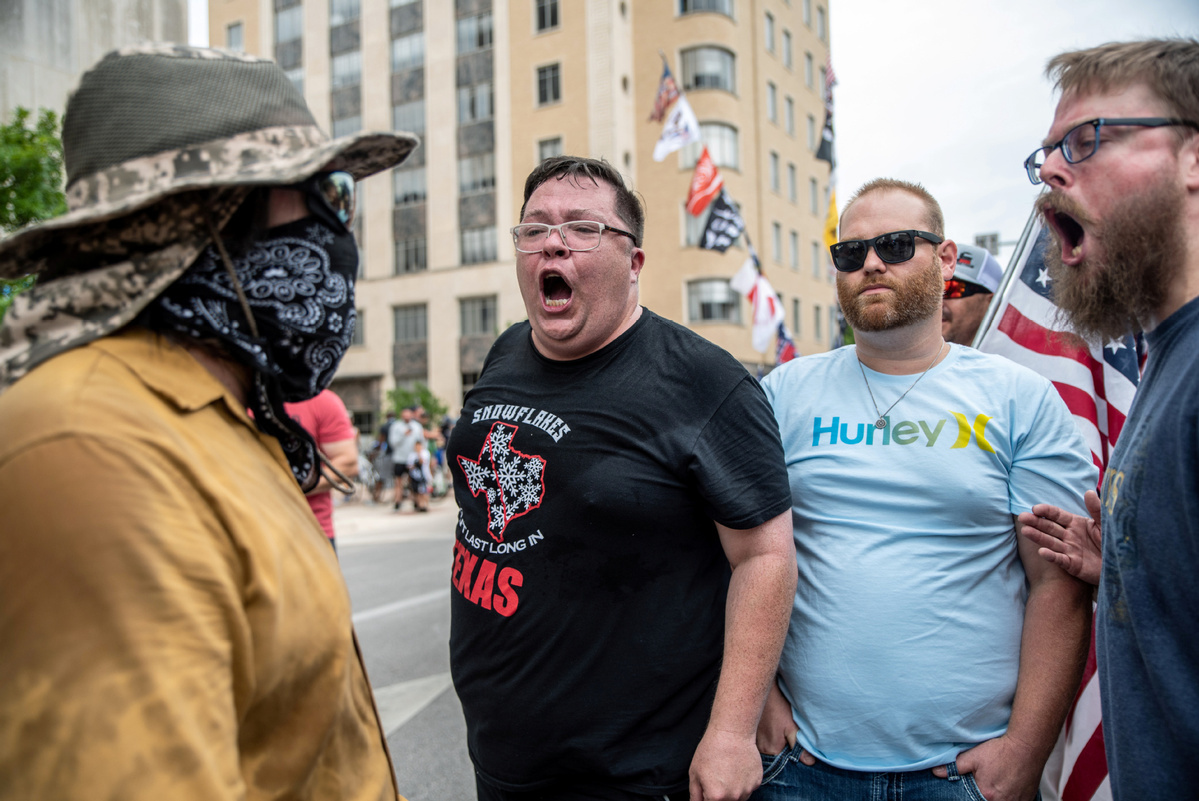 People protest against mandates to wear masks amid the coronavirus disease (COVID-19) outbreak in Austin, Texas, US, June 28, 2020. (Photo: Agencies)

The governor of Texas reversed himself Thursday and mandated that most residents wear face masks as cases of the novel coronavirus surge in the Lone Star State, and states across the country reported more than 50,000 new cases as the US headed into a three-day holiday weekend that health officials fear could spur more infections.

Trump didn't take any questions but said the worst of the virus was in the rearview mirror and that "we are putting out the fires" where there are flare-ups.

In Texas, Governor Greg Abbott said in a statement after issuing his order, "We have the ability to keep businesses open and move our economy forward so that Texans can continue to earn a paycheck. But it requires each of us to do our part to protect one another — and that means wearing a face covering in public spaces."

The order by Abbott applies to Texas counties with 20 or more coronavirus cases. It was an about-face for the Republican governor. Last month, in a television interview, he said that while businesses could be ordered to require masks, "We want to make sure individual liberty is not infringed upon by government, and hence government cannot require individuals to wear masks."

Despite his own stand, Abbott had allowed for local authorities to require masks in businesses.

Texas, with more than 8,000 new cases, joined Arizona, California, Florida, North Carolina and Tennessee in setting single-day case records on Wednesday as the US set another record for new cases at 50,203. At least 23 states have paused reopening plans amid the surge in infections.

Vice-President Mike Pence was in Tampa, Florida, on Thursday to meet with Florida Governor Ron DeSantis as the state set another daily record with 10,109 more coronavirus cases.

Pence insisted that Florida and other southern and western states witnessing a "Sun Belt resurgence" are well positioned to handle the spike.

"But we really do believe that because we're in such a better place today … the people of Florida can rest easy," Pence said, saying that testing, medical supplies and hospital availability was better than in the early days of the coronavirus pandemic.

Pence also said Republicans are "excited" about heading to Jacksonville in August for the Republican National Convention, noting that unspecified "sophisticated plans" are in the works to protect attendees.

Dr Soumya Swaminathan, chief scientist of the World Health Organization (WHO), said Thursday that young people aren't immune to getting the virus, especially if they are overweight.

"We should not become complacent that it's fine for young people to get infected," he said, "because there is a subset, particularly those with obesity, those with habits like smoking, for example, who are at higher risk of complications and death."

Johns Hopkins University reported that the new virus cases pushed the US total to more than 2.7 million since the pandemic began six months ago. The US daily death count was 645, about average among recent days but down from daily totals that exceeded 2,000 in April.

Congressman Andy Biggs, chairman of the conservative House Freedom Caucus, on Thursday called on the White House to shut down its coronavirus task force, claiming that the nation's top public health experts were undermining the president.

"As our economy is restored, it is imperative that President Trump is not undermined in his mission to return our economy to greatness," the Arizona Republican said in a statement after the Labor Department issued its jobs report.

Arizona is among the states contributing to the climb in caseloads.